Famous playwright William Shakespeare said, “If music be the food of love; play on”. Music touches our soul in strange ways. Whatever form it is, music has the charm to reach the soul for the education, if its virtue.

The glorious day 14th -15th August, 2013 witnessed a scintillating event at University Of Hyderabad in association with SPIC MACAY. The event captivated the spectators for an overnight ecstatic journey. SPIC MACAY seeks to foster the exchange of traditional Indian values and to generate awareness of the cultural traditions and heritage of India.

An overnight concert series of classical dance and music extravaganza, by great maestros of classical art forms and a packed auditorium of enthusiastic audience – this is what Yamini 2013 gave to the lovers of Indian music and culture in Hyderabad on the eve of Independence Day.

Yamini true to its meaning was the night that descended on gently, slowly to the mellifluous notes of music and the gentle rhythm of artiste’s feet. It was the night when the clouds above, part to reveal the star spangled banner of the dark skies, the time when the lush green campus of University of Hyderabad had sported its best hospitality for the patron of arts.

The aesthetic night began with the Kathakali performance by Chandrashekaran Assan and group from Kottakal. The packed auditorium was first demonstrated the basics that go into a Kathakali performance – navarasas (the nine emotions), mudras (hand gestures) and the performance aspects like aangika, vaachika, sattvika and aahaarya. As the lights dimmed and Shri Chandrashekaran Assan took to stage, the audience watched in rapt attention the short episode of Ramayana, narrating the story of Ravana and Rambha, unfold before them amidst the beats of the chenda, maddala and edakka. Though there were a lot of first timers watching the performance, the act managed to keep them engaged for its entire duration.

Next to enthrall the audience with Carnatic Vocal recital were the Malladi Brothers, Shri Rama Prasad and Shri Ravi Kumar from Andhra Pradesh. The duo who are ‘A’ grade vocalists of All India Radio entertained the audience with compositions of Subraniam Iyer, Tyagaraja Swamy, Nedunuri Krishnamurthy, Muthuswamy Dikshitar, Sripad Rao Ramadasu, Tallapaka Annamacharya in the raagas of Mohana, Anand, Bhairavi, Revathi, Khamas. As the clock showed five minutes past 12 on the morning of 15th, the Malladi Brothers sang Iyam Swatantra Bharthi, a composition in Sanskrit, to commemorate the 67th Independence Day.

Dr. Kamala Shankar, a Hindustani classical guitar player and the first lady to have adopted Shankar guitar commenced her recital early morning. With Javed Najmuddin on the tabla, she played compositions in raag Gorakh Kalyan, raag Pilu in Dadhra, the bhajan Paayo ji Maine ending with Vande Mataram. Most of the audience who had never before seen a Shankar guitar was mildly surprised yet fascinated to hear a guitar that sounded like sitar. Dr. Shankar’s model is made from a single block of wood, with thicker walls and no sound hole. It has 4 melody strings, 4 chikari (rhythm strings) and 12 taraf (sympathetic strings).

Shri Manda Ananthakrishna on Carnatic Flute entertained the gathering with Vande Mataram on Desh Raaga, Panchratna Kriti, Annamacharya’s Kirtana, Tyagaraja Swamy’s Nasikabhushani, a folk tune called Modi and Raghupati Raghav Rajaram. The pieces were intertwined with insights from various raagas, the elements (ras) that go into each composition and anecdotes about his musical journey. Slow and melodious one moment, fast and catchy the next, Shri Ananthakrishna kept the music aficionados nodding in joy to the sound of his flute.

Dr. Ashwini Bhide Despande’s Hindustani recital began at 5am in the morning. The crowd had thinned and some looked visibly sleepy. But as compositions in raag Lalit floated through the auditorium singing the efforts of Maa Jashoda to wake up little Kaanha, people came out of their slumber. Calling raag Lalit early morning raga that aids in the slow awakening of mind, body and soul, Dr. Deshpande sang three compositions in it. She also sang various compositions in raag Ahirbhairav, Vibhas, as well as a bhajan in raag Bhairavi.

The overnight concert was an eclectic mix of Indian classical music performances which ended at 6.30 am on 15th August, was a ‘true humbling and life altering experience’ that elevated the audience senses to a different realm. 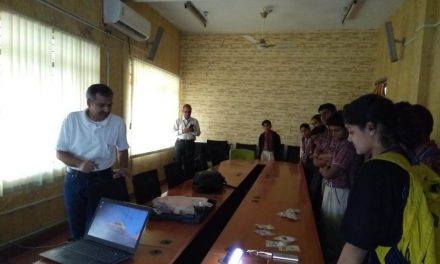