Man-made famines that killed millions by starvation, power plays that decide who laden tables serve, the inter-twined development and degradation of human development and ecology, Amartya Sen’s conscientious approach of placing the welfare of the poor as the objective of economic policies, Rabindranath Tagore’s dreams of an abundant India and India’s poor resource management system- these were but some of the diverse range of topics that were discussed at a small classroom wizened by participative students interacting with Prof. Mark Lindley.

Prof. Mark Lindley is currently a visiting the University of Hyderabad, and a series of lectures lined up at the School of Economics have been designed to discuss the history and the present of world and Indian economy. Born in Washington DC in 1937, Prof. Lindley is both a noted musicologist and a historian of modern India, especially known for his scholarship on Gandhian ideas. He has traveled extensively in India and across the world, lecturing in universities, colleges and schools, from New York to Nizamabad. He has published numerous papers and over a dozen books on Gandhi, Kumarappa, modern Indian history, and musicology.

His first lecture was titled “Amartya Sen and Ecological Economics.” He introduced and discussed the brilliant Nobel Laureate through the latter’s works. Sen’s “Poverty and Famine: An Essay on Depravation and Entitlement” saw him bringing attention to the fact that famines were caused not only by natural disasters, but by unequal distribution of food and legal system that placed it out of reach of particular groups. Amartya Sen lived through the great Bengal famine wherein thousands perished as the British troops hoarded food grains in armories, depriving Indian troops and civilians of food.

Amartya Sen is not an ecological economist. Ecological sustainability is not at the crux of his approach. He gives greater importance to the welfare of the poor and equitable distribution of resources for creation of opportunities for growth, rather than ecological sustainability. His work on utilitarianism, ethics and public policy led another Nobel Laureate economist Robert Solow to call Amartya Sen the conscience of the profession.

Prof. Lindley pointed out that Amartya Sen has his share of critics too. Partha Dasgupta, an economist of Indian origin, said of Jean Dreze and Amartya Sen’s An Uncertain Glory that it failed to study India’s ecological footprint in recent years. Sen mentions only in passing remark that the ‘risk ‘of climate change may affect the lives of people across the world. However, it’s much more than just a risk.

Climate change is an undeniable reality that assumes importance in economic discourse in the light of the fact that the poor stand to lose the most in the battle between human ambition and nature’s course. The practically irreversible nature of the effects of climate change raise concerns that need to be addressed.

Amartya Sen argues that the present generation owes its successors the generalized capacity to create well-being, and not any particular thing or resource. He says that it is not for us to know or predict the needs and tastes of the future generations. Some economists argue that the advancing technologies will find substitutes for every resource, which by extension means that no resource is going to be depleted so as to speak.

Economists whose theories disregard ecological constraints cite examples of economists’ predictions of the world starving itself, as Paul Ehrlich did in 1968 in his paper “Population Bomb”. He did not foresee the green revolution brought about by Norman Borlaug. Rachel Carson, the renowned marine biologist from USA, predicted a silent spring wherein birds would cease to sing in spring due to lack of food – insects would have been wiped out by the excessive use of DDT, which turned out to be a hyperbole. Amartya Sen is among the economists who believe that timely interventions will counter the effects of resource depletion.

Elitist theories that cry for conservation and ecological balance whose origins lie with people who have not lived in the harsh environments they speak of in terms of starvation, forest dwellers, tribal livelihoods, serve little purpose as they do not offer any solutions to either the exploited or the exploiters. The range of discussions was diverse, and if the question and answer session was any indicator, the rest of the lecture series by Prof. Lindley are set to be quite simulative and bring forth a multitude of ideas and debates. 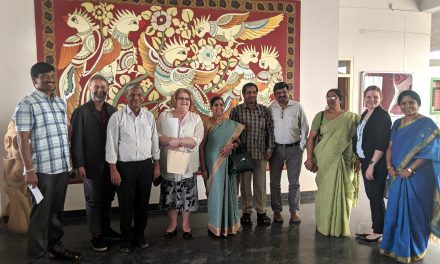