Mr. Amar spoke on the topic “Being and Becoming a Journalist: Reflections from 40 Years of Practice” drawing on his rich experience in print and television media along with his role in journalist unions. Prof. Vinod Pavarala from Department of Communication chaired the session, and introduced Mr. Devulapalli Amar as a “trade unionist at heart” who has immense knowledge of the Telugu-speaking states.

Stressing on the importance of the profession of journalism, Mr. Amar said “Being a journalist is easy, but becoming a journalist is very difficult”. He emphasized on the growing menace of news sensationalism, the need for gatekeeping of social media, and the scope of crowdfunded news organizations in Telangana. He also addressed questions from students on a variety of topics like media ownership, future scope of journalism, and challenging assignments faced by him during his career.
The session ended with a vote of thanks from Prof. Vinod Pavarala, who outlined how journalism remains a charming profession despite the challenges faced by newcomers in the field.

ABOUT THE SPEAKER- Mr. Devulapalli Amar has more than four decades of experience as a print journalist across many major Telugu newspapers. He was recently elected as the President of the Indian Journalists Union, and has also served as the President of the Andhra Pradesh Union of Working Journalists (APUWJ). He is currently a Consulting Editor with Sakshi Daily, and hosts the popular panel talk show “Fourth Estate” on Sakshi TV. “Dateline Hyderabad”, his recently published book, is a compilation of his newspaper columns dating back from the early days of his career. 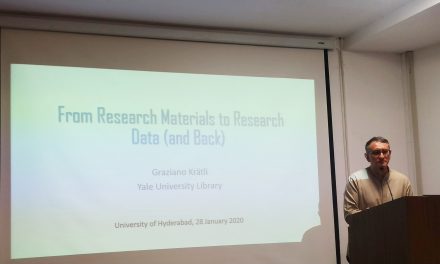 UoH Ranked among the Top in Research by Nature Index