The School of Social Sciences, University of Hyderabad (UoH) in collaboration with Goethe Zentrum and Alliance Francaise, Hyderabad, conducted a day long program titled ‘Beyond Wars’ in commemoration of the centenary year of World War I on the 7th of November 2014. The day started with the inauguration of a photo exhibition showcasing the involvement of Indian, Africa and other colonies in War efforts. This theme was carried forward in the panel discussion titled “Beyond Wars”. The panel discussion intended to focus on the various dimension of how wars have impacted societies of the World. It also sought to highlight how different counties remember War. The World War I not only had lasting impact on Europe but also other parts of the world and left several million combatants and civilians dead. Though most of the non-Western societies were away from the major sites of the war, people from these regions experienced the War in direct and indirect ways. Experiences of war have been different for different sections and evoke a variety of intellectual responses and emotions in different parts of the world. Whatever be the experience the overwhelming feeling across all sections of people is the same: Wars need to be avoided.

Dr. Aloka Parasher-Sen, Dean, School of Social Sciences welcomed the gathering. The Pro Vice-Chancellor, Prof. E. HariBabu then gave the welcome address stressing the need for systemic archival research to understand the very basic question “What War does to people”. Ms. Amita Desai (Director, Goethe Zentrum) very ably summed up by stating the purpose of the series of programs as “To dialogue what has been”. Dr. Shaji from the Department of Political Science proposed the vote of thanks.

The four speakers for the day were Prof. Kaushik Roy, Dr. Axel Harneit-Sievers, Prof. A.K. Ramakrishnan and Prof. Samuel Berthet. The sessions were chaired by Dr. Arvind Susarla and Prof. Prithvi Ram Mudiam. The four speakers brought out various aspects of the World War I and helped paint a clearer picture of the war that changed the course of the world.

Prof. Roy highlighted the history of British-India Army and hoped to shed some light to a part of history which has remained largely neglected. His presentation based on the personal letters of Captain Kalyan Kumar Mukhopadhaya raised questions of particularities and the problems of history telling based on such sources. Dr. Harneit-Sievers and Prof. Samuel Berthet, respectively, helped shed some light on the German and French involvement in the World War I. Prof. Ramakrishnan, while talking about the world war and international relations spoke of the changing power relations in the international system. He problematized the nature of conflict itself by stressing on a systemic understanding of war rather than traditional understanding. He also emphasized the role of “human agency” in context of conflict.

The panel discussion helped address important questions of how memories of violence become firm parts of a nation’s history; can there be a differentiation between immediate causes and structural causes when it comes to war and the expansion of alternatives in the form of peace initiatives. In all the panel discussion helped form a better understanding of the importance of WW I (as the starting point of various anti-colonial struggles) and also to acknowledge the alternate narratives of events which can emerge apart from the nationalist narratives.

The event concluded with the screening of a documentary “Because We did Not Choose” by director Wanphranh K Diengdoh who was present at the event to interact with the audience. 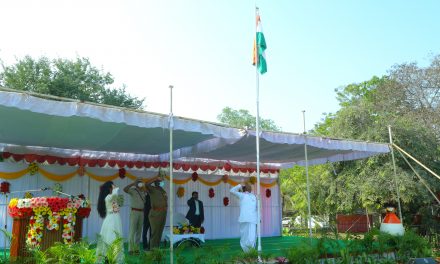