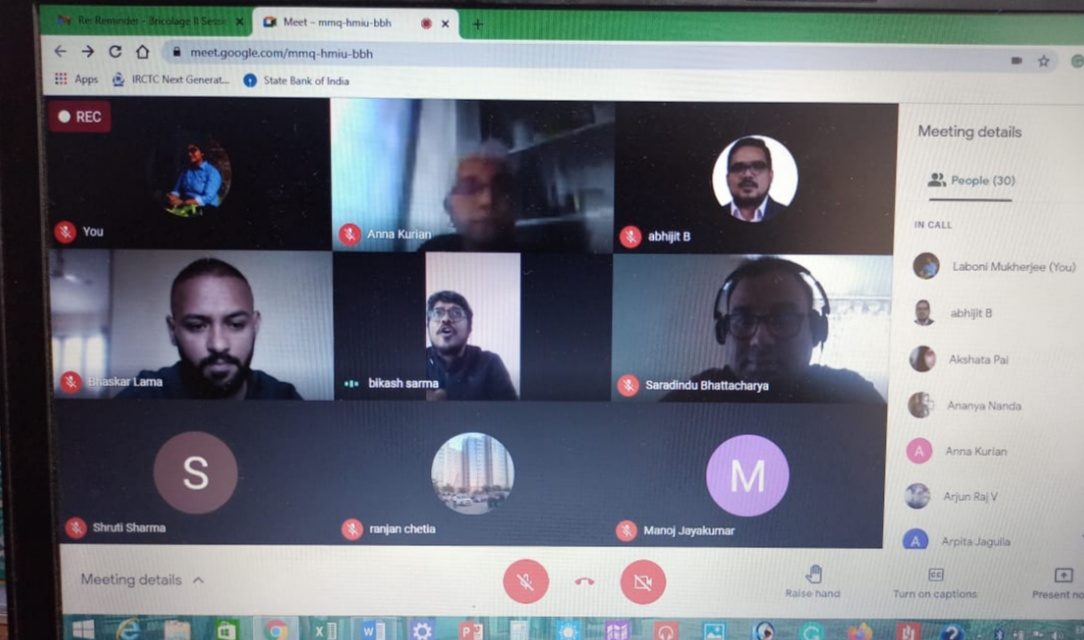 The fourth online event of Bricolage II, a series of readings, talks and conversations organised by the research scholars of the Department of English, University of Hyderabad was a lecture delivered by Shruti Sharma, doctoral candidate at CSSSC, and Bikash Sarma, researcher (JNU) and teacher, Salesian College, Siliguri on the 13th of February, 2021. Over the last year, Sharma and Sarma have co-written a series of articles analysing the bio-political, social and spatial dynamics of the pandemic, and they shared some of those insights through the course of this lecture. Titled “Frantic Spatio-temporality of CoVid-19: Social Isolation and/in the Home”, the talk deliberated upon the reconfiguration of domestic space in the light of the pandemic and the lockdown that followed, primarily along the fault lines of gender. They reflected on the theme of the “self-at-home” in post-lockdown India, and in particular, “the gendered experiences and expressions of the self” within the uncanny/unhomely quarantine-home.

The speakers began by contextualising their analysis within the larger field of academic responses to the pandemic and the lockdown from across the globe, whether re-readings of authors like Michel Foucault whose elaborations of spatial regulation, segregation, discipline, surveillance and control resonate intensely in the present times, or the more “self-centred” reflections by writers attempting to make sense of their own locked-down selves. In particular, the talk responded to Catherine Malabou’s article on the quarantine “To Quarantine from Quarantine: Rousseau, Robinson Crusoe, and ‘I’”, in which she locates the ideal of “redoubled isolation” in the work of Jean-Jacques Rousseau as well as in the figure of Robinson Crusoe. This “redoubled isolation” is one in which the self isolates not only from disrupted public sociality but also from “collective isolation”, creating a “psychic space”, a “confinement within confinement, a place in the place where nobody could enter”, a place of creativity for the individual self “in communion with oneself”.

The speakers admitted that though they found Malabou’s reflections on the quarantine to be extremely relatable initially, they soon realised that the “self-at-home” had to be thought very differently in the Indian context. Though the speakers touched upon the exodus of migrant workers from the urban to the rural regions of the country and their search for a displaced and dispersed home, the focus of their analysis remained the urban savarna heterosexual family home.

The speakers pointed out how in an era of estrangement from the public, in which the outdoors has become saturated with anxiety and uncertainty, the “home” has been singled out as a “metaphor for existence”, a site in which the disrupted self attempts to locate existential meaning. But while the “home” has been re-romanticised as a space of familial bonding and intimacy, in India, the burden of producing and reproducing this sense of intimacy and belonging, the speakers argued, falls to certain members of the household, most often female homemakers. It was pointed out that while routinized time was disrupted by the pandemic, the experience of time it generated was very different for different genders. While men have “spare time” on their hands, they do not have the “time to spare” for domestic chores, the responsibility of which supposedly rests with women.

While Malabou and others have written about a choice within quarantine to withdraw from others into their own private space, the speakers emphasised how this kind of choice was not available to many women in the Indian scenario, for whom the self cannot be “bracketed away” from the social, but instead for whom the hold of the social is intensified and strengthened in quarantine. Women within these households are expected to spend their time, energy and labour making the quarantine-home hospitable for the male members of the family, who ask for their separation from the public to be compensated by physical and emotional intimacy at home. Responding to newspaper articles about the gendered division of household chores in the lockdown, the speakers emphasised how for female homemakers, there is no choice of isolating away from the social (which is present at all times in the form of the family). They bear the increased weight of the social upon them instead, given the absence of any breather or escape which access to the outside world could have provided.

The lecture was followed by an interactive session during which the speakers discussed with the audience the question of ethical responsibilities in the household and the distribution of work in the home including care-work and emotion-work. The speakers were also asked questions about the enmeshment of different spaces, the interface between digital and physical spaces, and the distribution and use of leisure time in the quarantine-home. The audience also raised questions about queer people locked down in heteronormative homes as well as about domestic violence in the lockdown. These deliberations led to a keener understanding of the spatio-temporality of ‘home’ as one that marks not an absolute separation from/of the social but that is materially and discursively encoded within structures of power and privilege.