Charity and Philanthropy in South Asia

“Charitable and philanthropic activity permeates all levels of society in South Asia—from individual donations to major philanthropic trusts and foundations across the region—but relatively little has been written about the politics of charitable acts and philanthropic individuals outside the Western world, South Asia included, with much existing research focused on Europe and the United States, said Dr. Filippo Osella, Professor of Anthropology and South Asian studies at the University of Sussex while delivering a Distinguished Lecture at the University of Hyderabad (UoH) on 15th November 2017.

Dr. Osella in his lecture titled ‘Charity and Philanthropy in South Asia’ stated, “This might not come as a surprise in that considerable literature links philanthropy to the rise of modernity and capitalism in the West, and therefore contrasts modern philanthropy with more traditional forms of gift giving. Existing research on the politics of giving in South Asia has tended to reinforce this perspective, implicitly juxtaposing the embeddedness of South Asian giving in religious morality with the apparent Universalist humanitarianism of modern philanthropy”. By examining the interconnections and influences of different modalities of giving, Prof Osella seeks to unsettle a dyadic focus on tradition and modernity which ultimately consigns South Asian charity and philanthropy to the realms of either naked instrumentalism or religious piety. Based on comparative research amongst Muslim communities in Kerala and Sri Lanka, he explored the everyday working of economies of morality in which profit and piety might coalesce or appear antithetical with equal ease, arguing that altruism and self-interest might not be necessarily at odds with each other as we have been led to believe.

Dr. Filippo Osella has conducted research in Kerala, south India, since 1989 and published two joint monographs (with Caroline Osella): one on issues of stratification, identity and social mobility among an ‘ex-untouchable’ community (Social Mobility in Kerala, 2000, Pluto Press), and another on masculinities (Men and Masculinity in South India, 2007, Anthem Press). His recent research examines contemporary transformations of south Indian Muslims communities, with fieldwork in Kozhikode (Calicut) and a number of Gulf countries. He has co-edited a special issue of Modern Asian Studies on “Islamic Reform movements in South Asia’ (with C. Osella), a special issue of South Asia: Journal of South Asian Studies on “The Politics of Food in South Asia” (with C. Osella) and a special issue of Journal of the Royal Anthropological Institute on “Islam, Politics and Modernity” (with B. Soares). He has recently concluded a research project on charity, philanthropy and development in Colombo, Sri Lanka. His most recent publication includes a co-edited volume on Religion and the Morality of the Market (with Daromir Rudnycky), and a forthcoming special issue of Modern Asian Studies on traditions and practices of charity and philanthropy in South Asia (with Sumathi Ramaswami).

Prof. P Venkata Rao, Dean, School of Social Sciences presided. Prof. Sheela Prasad, Head, Centre for Regional Studies (CRS) gave the welcome and introduced the speaker while Dr. Arvind Susarla of CRS proposed a vote of thanks. The lecture was attended by students, faculty and staff of the University. 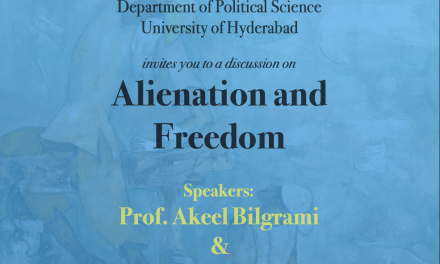