The event started with presenters welcoming the audience and giving background information of the actors involved in the play. The performance, which had a runtime of 40 minutes enacted a scene from ‘Kalyanasaugandhikam’. It is a mythological story that involved two prominent characters from Mahabharatha namely, Draupadi and Bhimsena.

Bhima was played by Anoop P, Ph.D. Scholar in English Language Studies. Draupadi was played by Thripayya Peethambaran, a veteran in the art of Kathakali who has played many feminine roles like Damayanti, Sati, Chitaralekha.

After the performance, the speakers thanked the actors for accepting the invitation and welcomed them on the stage. Dr Zahidul Haque, Associate Professor of Urdu Department and the Cultural Coordinator of the University felicitated both the artists.

Pictures of the performance can be seen at link:
https://photos.google.com/share/AF1QipPAO7sPuXaB7vskaN8wlfGqnd8NXlb_U4YH1HBEThCmuKLgY1mnC4V-YiTS6wbvlA?key=Vjh1LWVvMkNXV0pQc3BTSjZfYVZzb1laYUVNd2Vn

Prof. R. Chandrasekar invited to be a Fellow by the Royal Society of Chemistry 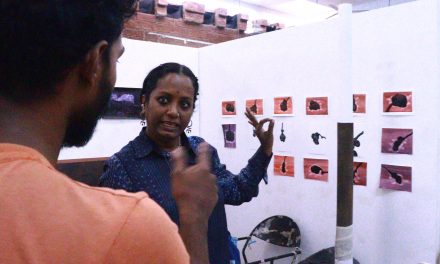