Films are a collection of experiences in life – Indraganti Mohana Krishna

Dr. Sripathi Ramuloo, faculty in CSSEIP who is closely associated with Mr. Krishna gave a brief insight into his personality and praised him to be a Good Environmentalist. Mr. Krishna shared his memories as a student of UoH with the audience. He was particularly impressed to mention about the greenery on the campus which still exists today. Mr. Krishna pursued his interest in Arts by obtaining a Master’s degree in English language and Philosophy from UoH. He shared his experiences as a Director and gave insights on aspects which need to be looked into while making films. Mr. Krishna said that a Director needs to understand what the audience will want while making a movie. He particularly asked the students to learn about the Camera and Lens which is the basic equipment that is used to make films. He said that films are a collection of experiences in life.

Indraganti Mohana Krishna (Film Director) was born on April 17, 1972 in a Telugu family in Tanuku, a small town in the coastal district of West Godavari in the state of Andhra Pradesh, India. His upbringing was from Vijayawada where he completed his schooling and obtained his Bachelor’s degree in Arts from Loyola College. Thereafter, he pursued his interest in Arts by obtaining a Master’s degree in English language and Philosophy from University of Hyderabad.

Indraganti Srikanth and Janaki Bala, and grandparents were writers and hence Mr. Krishna had a fascination towards fiction since his childhood. Once he appeared interested in filmmaking, his parents asked him to get formal education in it. Subsequently, he applied to enroll in one of the courses at the Pune-based Film and Television Institute of India; however, his application was rejected. In the meanwhile, he was the writer and associate director for Mahandhra, a socio-cultural, economic and political study of the erstwhile state of Andhra. This study, made in a documentary–drama format for Doordarshan, was performed in commemoration of India‘s 50th year of independence. He sent creative samples from this study to Toronto-based York University and its prestigious Department of Film in the Faculty of Fine Arts. This helped him join and complete Master of Fine Arts in Film between 1998−2000. Even though he registered to continue for his Doctoral degree in Communication and Culture, he discontinued it after a year and returned to Hyderabad in 2001. 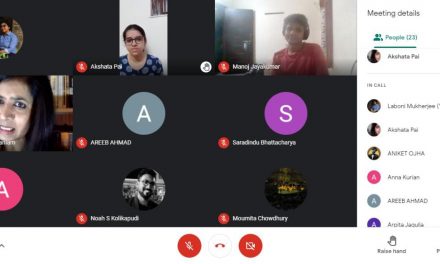 Bricolage II: “Give Me a Home that Isn’t Mine”