On occasion of Dr Nataraja Ramakrishna’s Memorial celebrations, Sarojini Naidu School of Arts and Communication, University of Hyderabad invites eminent personalities from the field of Arts to deliver Lectures. For this year 2019, Sri.Jayant Kastuar, an eminent Kathak artiste and ex-secretary of Sangeet Natak Akademi, New Delhi obliged to be the guest speaker.

Sri.Jayant Kastuar visited the Department of Dance on 25th March 2019, and had a very engaging interactive session with the Masters students. Here are a few highlights from the session:

• Initial introductions were completed, where Sri Jayant Kastuar was welcomed
• Then an Open forum was facilitated, the students were to ask any questions and learn from the eminent guest.
• One of the first questions posed was “What next and how to choose the path after masters course”. In response to the question, Sri. Jayant Kastuar unfolded his childhood memories of how he was introduced into learning dance, his family, his performance at the young and tender age of 2 years, how he became a star performer, a child prodigy instantly and gave numerous performances at various prestigious festivals.
• Students also got to learn about his leadership qualities from his graduation and post -graduation days, how he used to bring eminent artists to his college and organize cultural events etc. He also explained how he had to choose between dance and other lucrative offers he had after post- graduation, how he convinced his parents about his choice and where did he land with the choices he made.
• This brief account of his story gave the students a perspective on what are the various avenues available in dance field and how should one introspect and scrutinize themselves in what suits them or what interests them and move ahead with that conviction and honesty.
• When enquired about his association with his Guru Pandit Durga Lal, Jayantji gave an account of the time spent with his Guruji, his association with the Guru and the invaluable life lessons he learnt from him apart from the training in Kathak. It was a rare and extremely delightful insight into how Gurukula system flourished and what it meant to be a part of that system.
• Jayant ji also explained the students on what makes the artists great, their unique qualities that make them masters and legends. He explained his association with several legendary artists across different dance forms, to name a few Guru Kelucharan Mohapatra, Guru Kalamandalam Gopi, Guru Natarja Ramakrishna, and Guru Vempati Chinna Satyam.
• He also discussed about the impact that these eminent Gurus had on him and his learnings from them, how he has imbibed and implemented the learnings in his life and work.
• He gave examples on how he developed Sattvikabhinaya based on his learnings from observing Kudiyattam and Kathakali artists and also from Guru Nataraj Ramakrishna.
• He demonstrated few aspects from Kathak , his interpretation on Abhinaya and also briefly discussed on the workshops he conducted for Sattriya practitioners focusing on imbibing Abhinaya into their poems, how sringara can be interspersed into their deep rooted bhakti literature. It was a very enriching experience for the students to watch and learn from multi-faceted expert Sri.Jayant Kastuar.
• The interaction ended with giving the students a little practical workshop or experience of Kathak foot work, the wrist movements and Chakkars.

On the 26th of March, 2019, the distinguished lecture held at Humanities Auditorium was presided over by the Vice-Chancellor of University of Hyderabad, Prof. Podile Appa Rao.

• The Dean of S.N.School, Prof. P.Thirumal, Head of Department of Dance Prof. Aruna Bhikshu, other faculty members, students and research scholars from various disciplines attended the lecture.
• After the lighting of the lamp, a small video on Guru Sri. Nataraj Ramakrishna made by the students of S.N.School was screened highlighting the greatness of the Guru.
• VC congratulated the Department of Dance and S.N.School for organizing this event and bringing in such eminent speakers and also spoke about the greatness and humility of Guru. Sri. Nataraj Ramakrishna
• Prof. Aruna Bhikshu introduced the speaker to the audiences, and gave a glimpse into the relentless work carried on by him as deputy-secretary and then secretary of Sanget Natak Akademi, New Delhi.
• The subject of the lecture was “Practice and Policies of the Performing Arts in India-A National Perspective”.
• The speaker gave an insight into the basic philosophy of Sangeet Natak Akademi, its functions and how the National body worked and ins interactions and collaborations with the regional bodies across India.
• He gave a brief historical account of addition of several dance forms into the SNA Awards list from over a period of time
• He specifically mentioned that SNA has no authority to decide whether an art form is classical or not. It is the people of that region who have to accept the form and declare it to be a classical frorm themselves. The speaker also expressed about the confusions created by usage of English language specifically with reference to terms like Classical, Folk, and Tribal, Traditional etc.
• He gave an account of the efforts taken by Guru Nataraja Ramakrishna in reviving Andhra Natyam and how SNA worked with him in providing empowerment of dis-empowered in the society, why Andhra Natyam was given that specific name and how it was re-institutionalized.
• He briefly explained about the various dance festivals conducted by SNA from 1988 to 1998 under his leadership covering Kuchipudi and other Andhra dance traditions.
• He also emphasized the importance of local Govt. Cultural bodies as feeders to SNA to support local artists.
• In conclusion he mentioned that traditions can be preserved only by creation and performing art is created only when performed. And hence performances have to be supported by creating more and more performing situations that will help preserve the art.
• The speaker was honored by the VC Prof. P.Appa Rao and Dean of S.N.School Prof.P.Thirumal.
• Prof.Anuradha concluded the session with a vote of thanks. 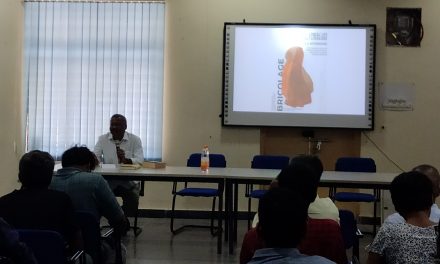