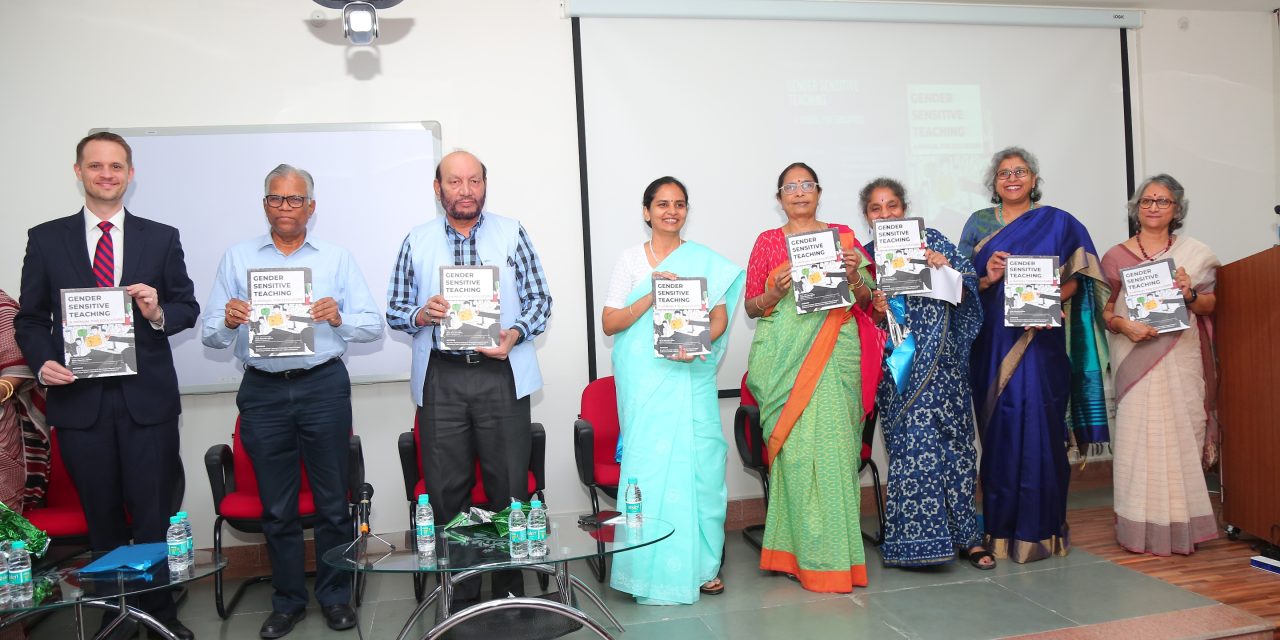 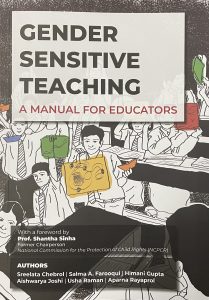 While introducing the book, Prof Aparna Rayaprol talked about “Project Samata”, through which the team had wanted to learn how gender plays out in low-income classrooms and what sort of an impact could teachers have on gender sensitisation. Their work was informed by desk research, interviews of teachers through Kriti Social Initiatives and observations from classrooms. Additionally, experts were roped in to make a program based on all this information. Himani Gupta, Director, Kriti said that after training 40 teachers in two batches of intensive online training, the team further trained 15 of the teachers to be master trainers so that they could train other teachers as well. She also mentioned that after conducting the workshops, the team received feedback from various stakeholders that they could make a manual to synthesise all that was learnt through the workshops. 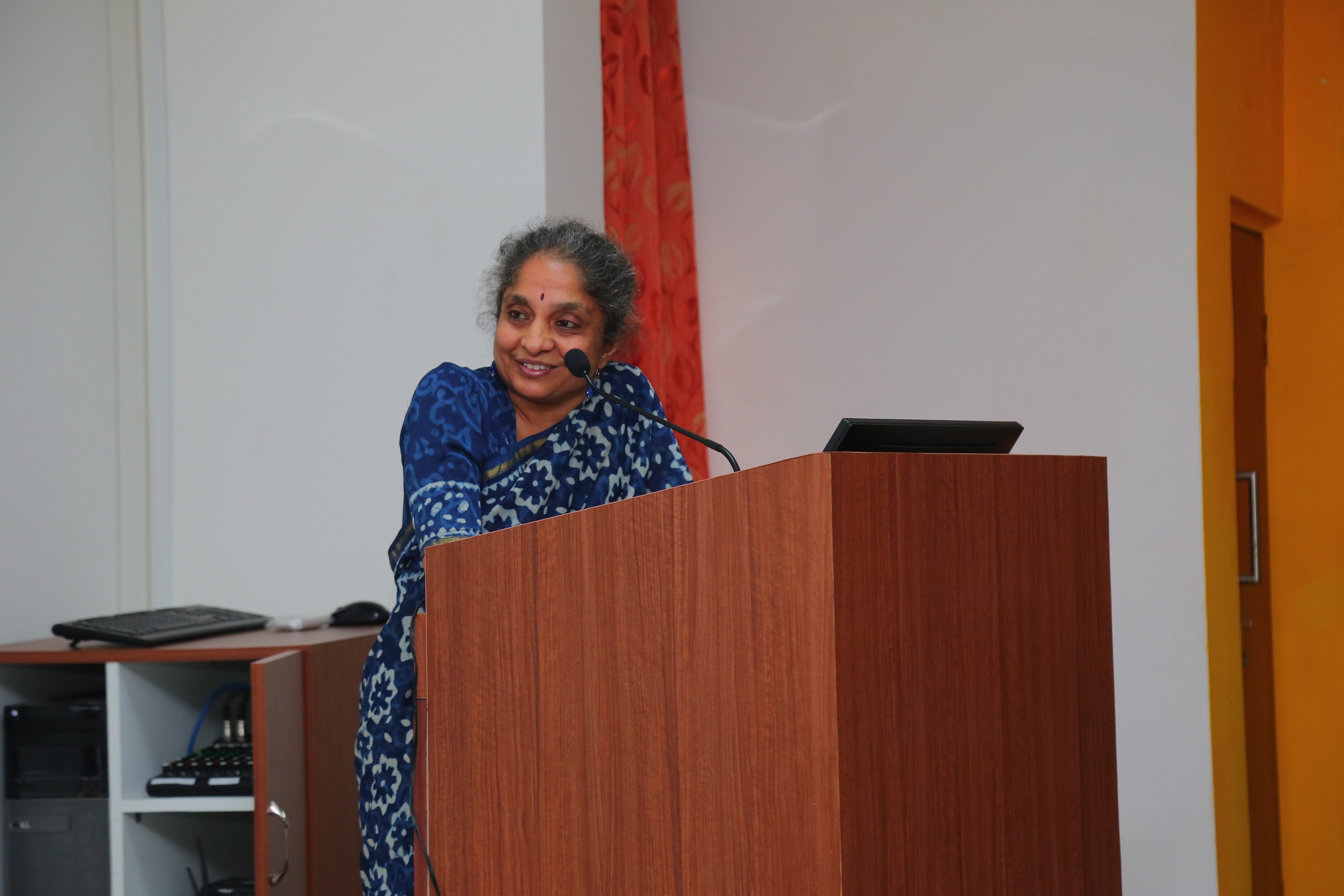 Talking about how the book was created, Prof Usha Raman explained that the team had wanted the book to be a collaboration between academics and people on the ground to be utilised to its full potential. Due to Kriti Social Initiatives’ previous engagements with teachers, the team could talk to teachers who trusted them and were happy to help. She emphasised that Ms Himani Gupta and the team at Kriti Social Initiatives were instrumental in making the book as easy to understand as possible. Calling the book “not a closed loop, but a spiral”, Prof Usha Raman said that the book was a manual that could be used in multiple ways to help educators be more gender-sensitive when teaching. 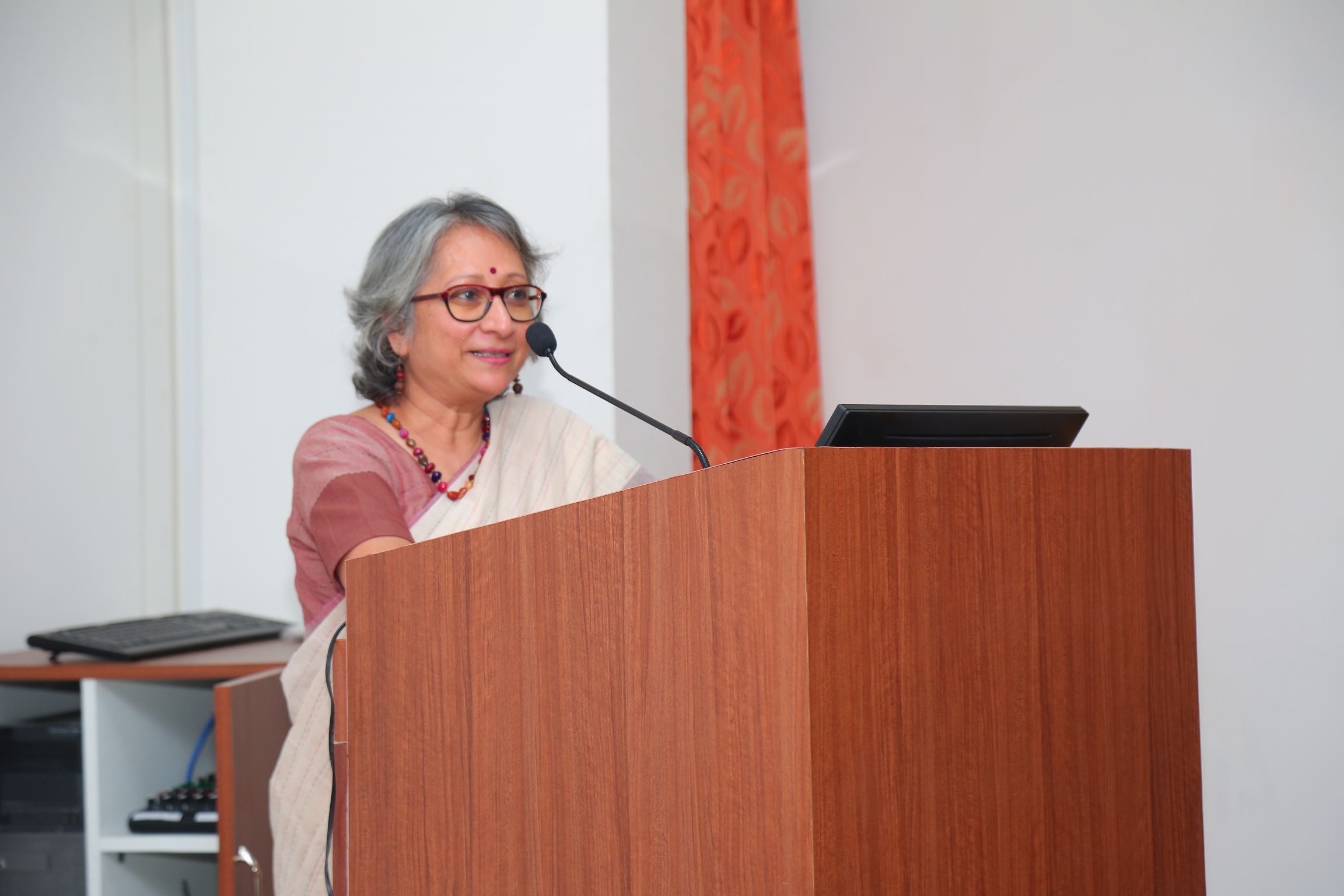 In her address, Commissioner Ms Divya Devarajan highlighted the impact that educators can make on the lives of their students, especially in rural regions and low-income communities. Talking about the struggles that girl students face, especially during the pandemic, in access to education, Ms Devarajan highlighted that she was sure the manual would be fundamental. She also said that it was necessary to translate the book to both Telugu and Urdu to be accessible to more educators, including the Anganwadi teachers who engage with very young children. 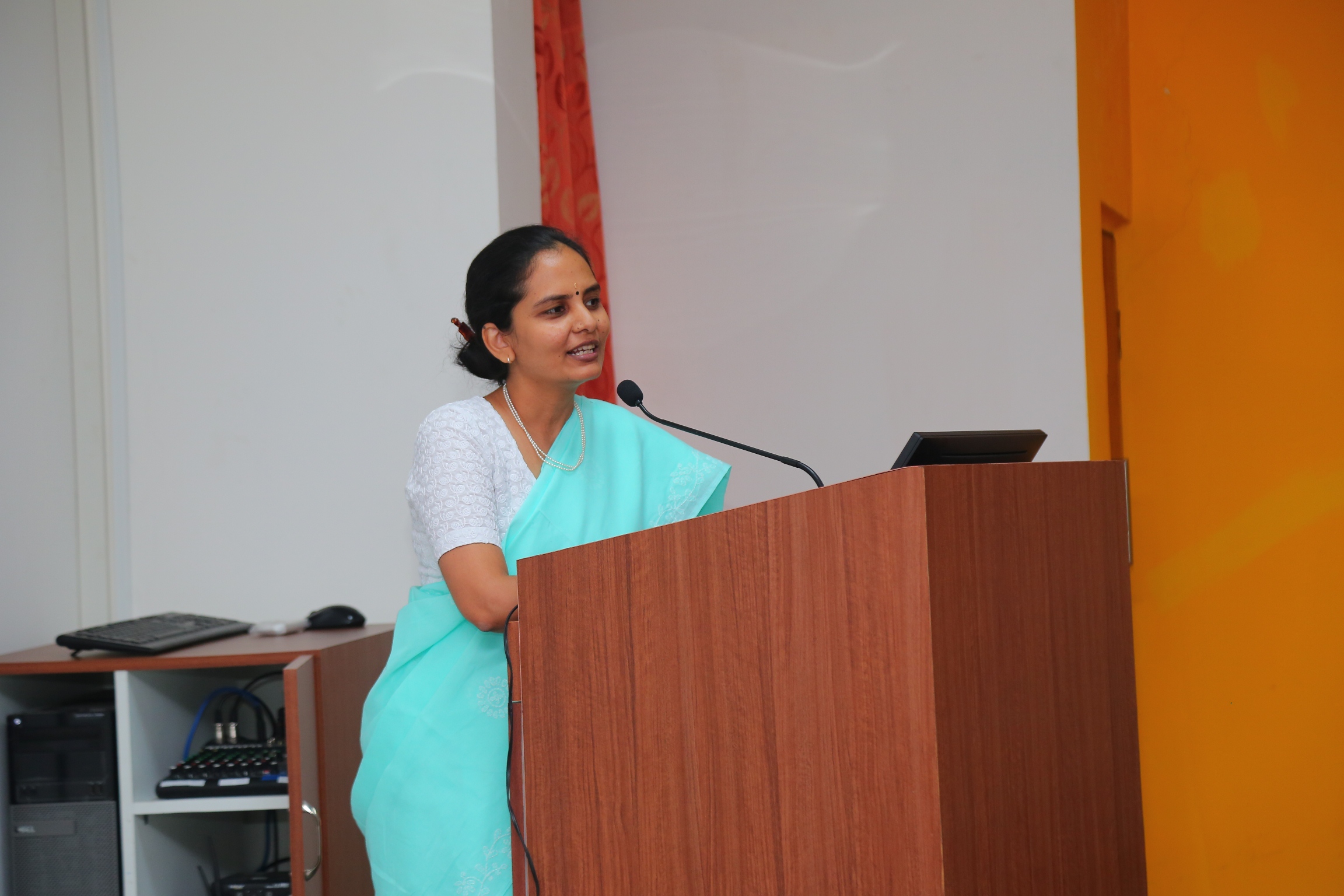 The Guest of Honour, Prof Shantha Sinha, the former HoD for the Political Science Department at UoH and Former Chair for the NCPCR, said, “Schools are very important institutions to transform societies”, and hence she was pleased with the radical stances that the manual took, to include gender sensitisation beyond the binary, but also by including children who are on the transgender spectrum. She also thanked Ms Devarajan for her offer to take the training to scale, which would change the culture at educational institutions for the better. 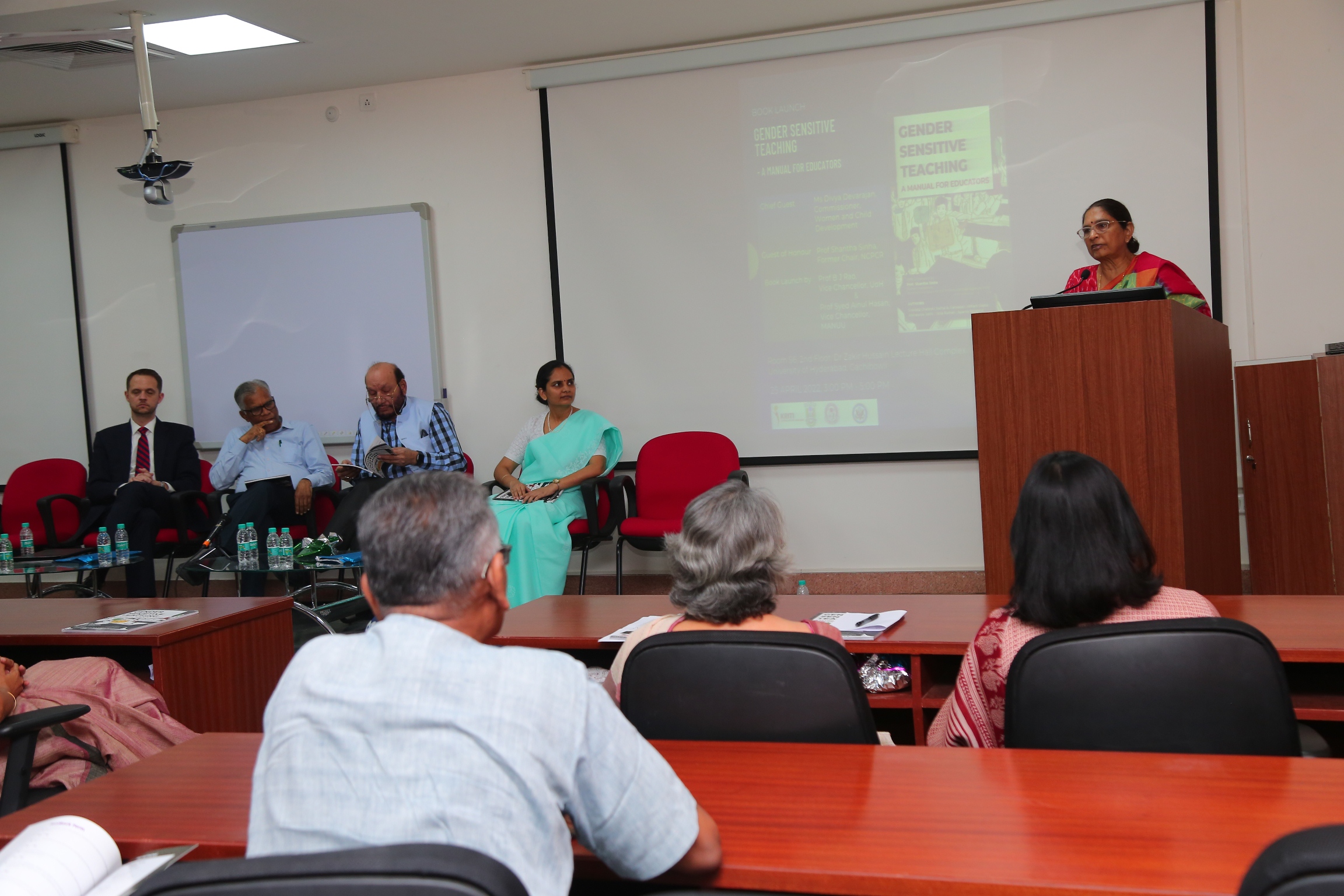 Talking about how long significant social change can take, Prof B J Rao, Vice Chancellor, UoH, said that “The inertia of culture causes problems because we are not moving as fast as we can against the drag.” He highlighted that despite the task of social change being slow by design, it was an important task. It requires contributions from all the stakeholders and needs constant momentum, which cannot be lost if we want to improve society. Talking about how much work is yet to be done for better gender sensitisation, Prof Rao said that people’s minds have to be changed for gender equality to take root in society. The manual would contribute to that process a lot. 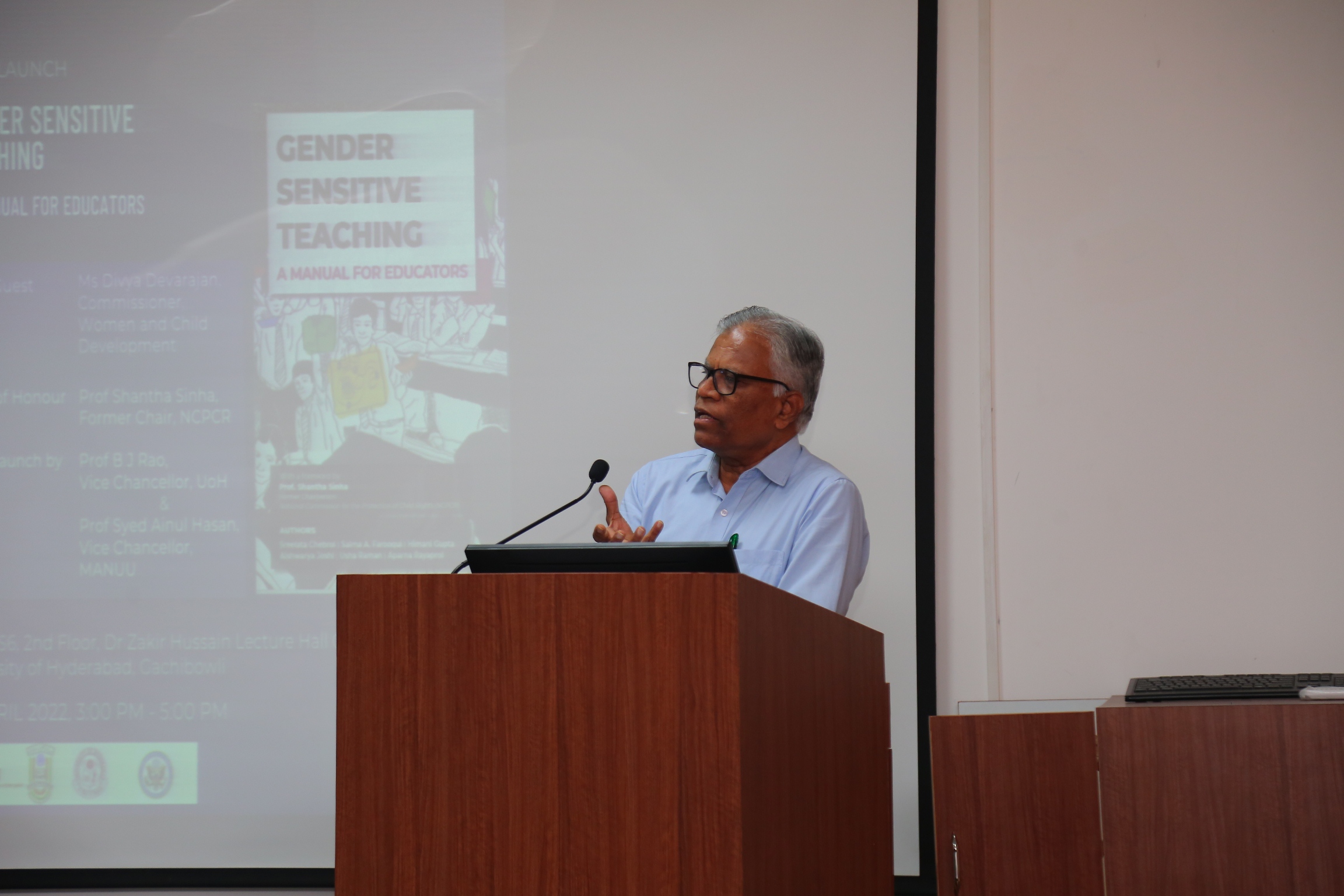 Prof Syed Ainul Hasan, Vice Chancellor, MANUU, explained that interactive studies are essential for better knowledge-creating processes. He said that the manual was something precious that came out of putting heads together. He called the manual a  testimony to the academic and social endeavour carried out by the universities’ professors and Kriti Social Initiatives. He also emphasised that the learnings from the manual needed to be delivered to the remotest locations. 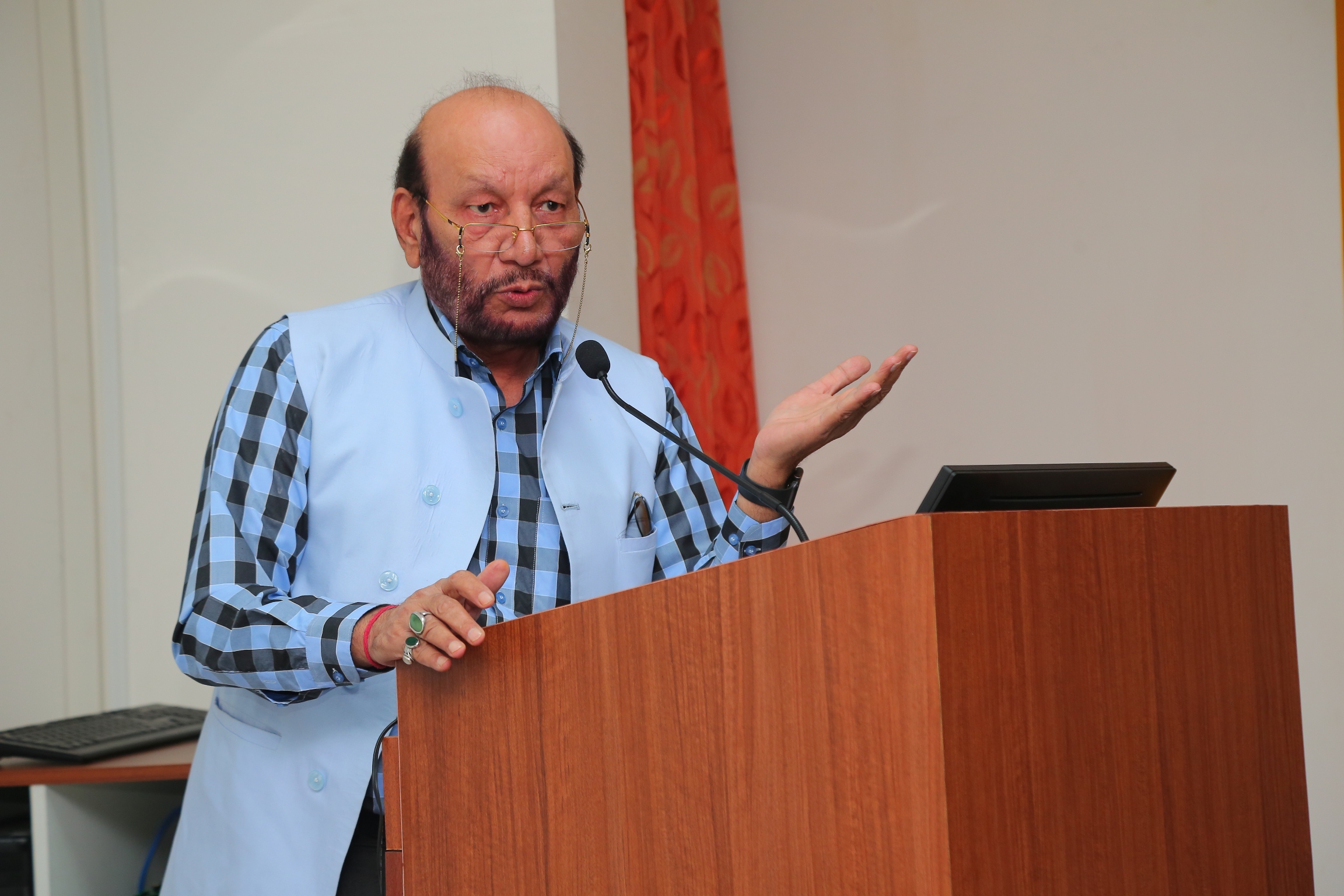 Mr Frankie Sturm also added to the conversation about the role that educators can play in the lives of their students by sharing instances from his own life. He said that there was a straight path between good teachers and a good life for their students. Saying that the US Consulate is always happy to assist their alumni, Mt Stern shared his hopes that the manual would be used for more teacher training programs. 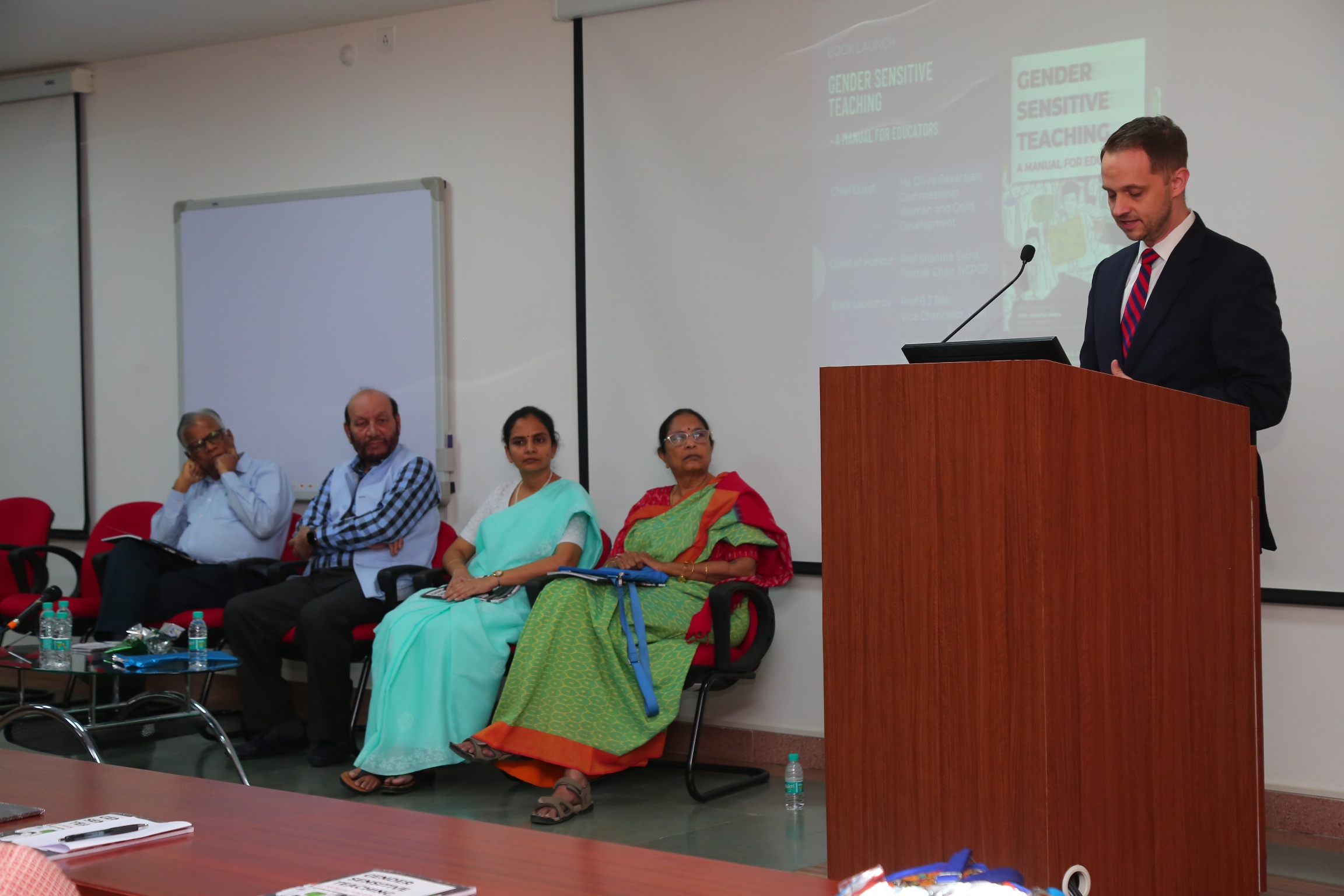 The event concluded with a formal vote of thanks delivered by Prof Salma Farooqui, MANUU, who called the long journey of the last two years a very fruitful collaboration between academia and the NGO. The dignitaries were gifted bags and diaries made by the women associated with Kriti Social Initiatives as a token of thanks.