How to avoid Plagiarism?

The major concern of the talk was to make students aware of plagiarism so that they avoid it and detect plagiarism through the use of technology. The speaker addressed the issue initially by introducing the concept of plagiarism and its distinct kinds like self plagiarism, mosaic plagiarism etc. He then focused on the various factors related to it, for instance he reasoned that students may plagiarize unconsciously and also due to the lack of knowledge about the ethics of writing or disorganization, poor study habits, lack of strict academic discipline and so on. He also pointed out the seriousness of self plagiarism.

Second aspect of the lecture focused on the JNU’s policy related to this widely known phenomenon. He said that JNU has a mandatory policy of checking all the dissertations/theses using Turnitin (anti-plagiarism software). It also has a rule to upload theses/dissertations on Shodhganga for easy and wide access to knowledge.

Vice-Chancellor welcomed the speaker. The IGM Library staff and scholars of UoH later interacted with Dr. Gaur and clarified their apprehensions on plagiarism.

Prior to joining the JNU, Dr. Gaur was Librarian & Head, Kala Nidhi Division at Indira Gandhi National Centre for the arts (IGNCA), New Delhi and was the Project Coordinator of an International Bibliographic Project known as ABIA, South and Southeast Asian Art and Archaeology Index. Dr. Gaur has also headed Kala Kosha Division of IGNCA, and National Mission for Manuscripts (NMM), IGNCA as its Director. He is the Project Coordinator for a collaborative project with C-DAC, Pune and Department of Information Technology, Government of India, on “Development of Digital Repository of Indian Cultural Heritage” under the project “Centre for Excellence on Digital Preservation”.

A Fulbright Scholar, Dr. Gaur is a Science graduate with Ph.D in Library and Information Science, with exposure to several advanced training programmes on the applications of IT to Library Management. Digitization and Digital Archiving of Indian Cultural Heritage is the main focus of his work at Indira Gandhi National Centre for Arts. Reengineering of Libraries, Open Access Publishing, Library Management, Copyright Issues, Annotated Bibliographic work, Microfilming, and Digital Libraries are, the other areas of his interest.

By Abu Saleh, Research Scholar in the Centre for Comparative Literature 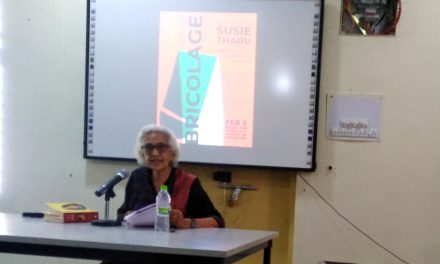