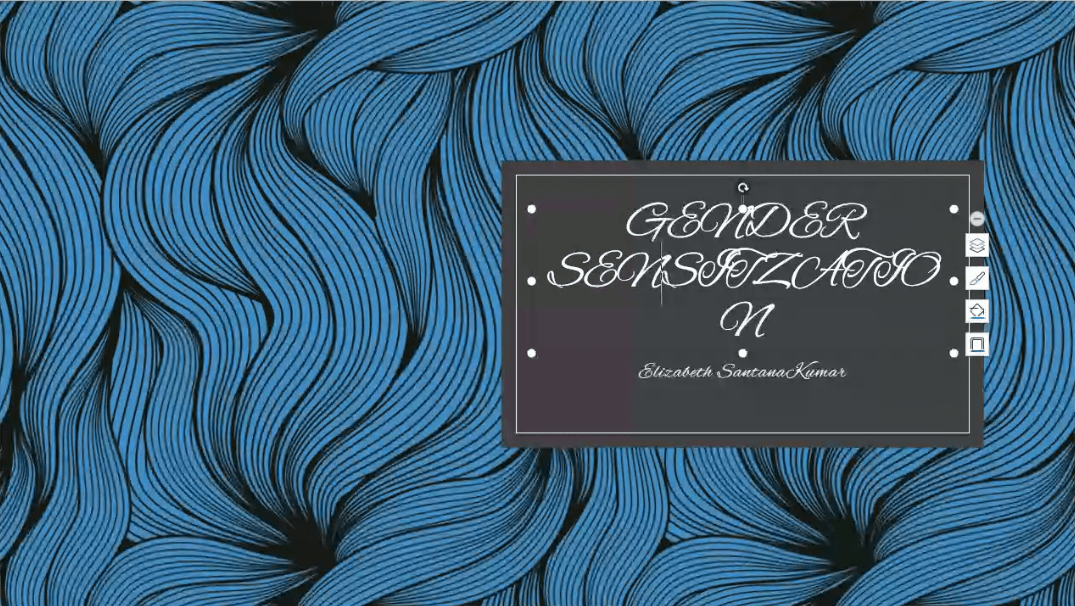 Chairperson of ICC (GSCASH) Prof. Ajailiu Niumai welcomed the guests and highlighted that ICC felt the need to conduct this online special lecture on Gender Sensitisation especially for the Deans, Heads & Administrative Officers around two months ago to apprise them of gender issues. She said that Gender Sensitization is extremely important as it is about changing behavior and instilling empathy into the views that we hold about our own and the other genders.

The Chief Guest Prof. B. Raja Sekhar, Pro-Vice Chancellor congratulated the organisers and welcomed the invited guest speaker Elizabeth Santana Kumar who is based in Brunei. He emphasized the importance of Gender Sensitization at this time when the University of Hyderabad is striving as one of the Institutes of Eminence (IoE) in India. 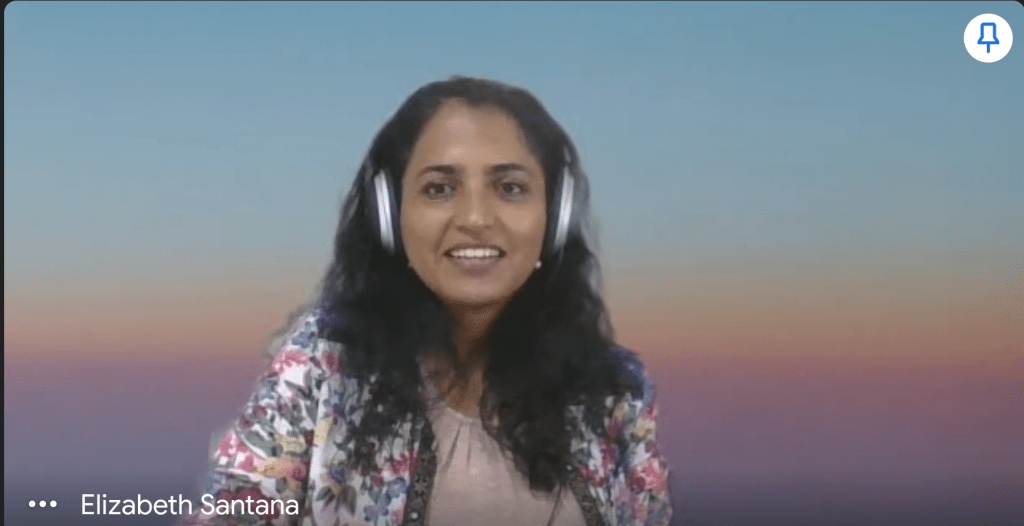 The speaker Elizabeth (who is a credible HR professional, Wharton TMI Alumni with extensive HR Learning, Organisation effectiveness & OD specialist experience in India, Qatar and Brunei for almost two decades) said, “We think we are all gender equal but there is still a need to have an open conversation about gender, not only at the university level but also in business environments. I am usually the odd one out; a brown skin woman living outside India working on an international platform with men which is why people come to me and asked as to how did I come here. Most of the meetings I attend, I am the only woman and that makes others even more curious. This clearly shows that we still need to address Gender Sensitization and tell people that diversity and inclusion are key to healthy businesses.”

She raised a question – why do we need Gender Sensitization? She said, “The iceberg provides a useful analogy. Let us look at the example of the movie Titanic. If you remember the giant ship titanic sunk because it hit an iceberg. So the captain assumed that if I could see the tip, there was nothing more and he could just manoeuvre around the tip and the ship would be safe. But what happened is that he forgot that an iceberg’s tip is only 10 percent and the rest 90 percent is invisible and below the water.” 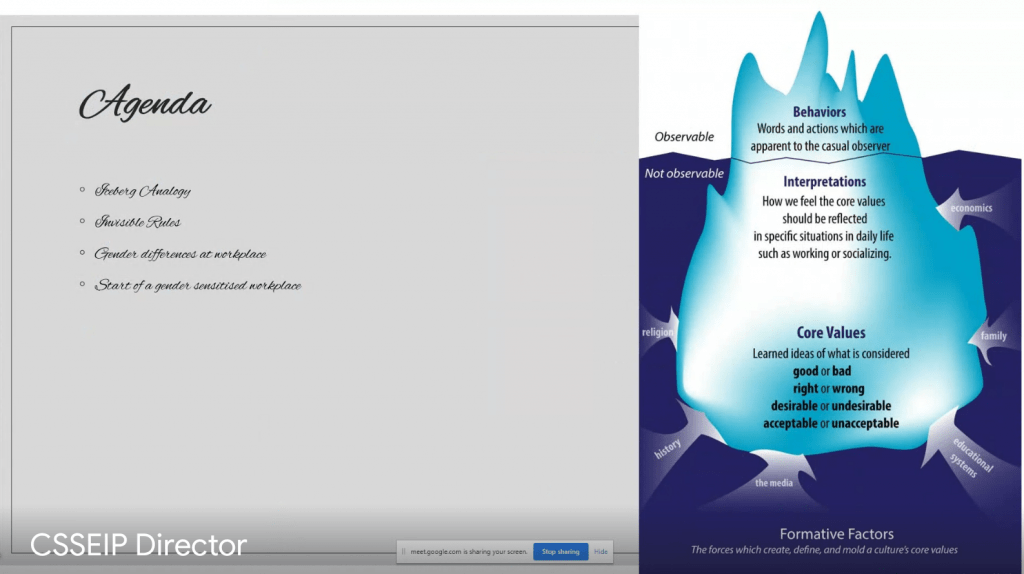 “Similarly,” she said, “the small tip (around 10 percent) of the iceberg that can be seen above the water level represents visible cultural elements. But the rest 90 percent of the iceberg that remains unseen below the surface represents the hidden cultural differences. What we see as behaviour is only 10 percent. You can see my gender, race, colour, physical abilities, language, and the like. But, this doesn’t mean you will know my value system, my heritage, my thoughts, my skills, my beliefs, my family status, my life experiences, among many other things.” 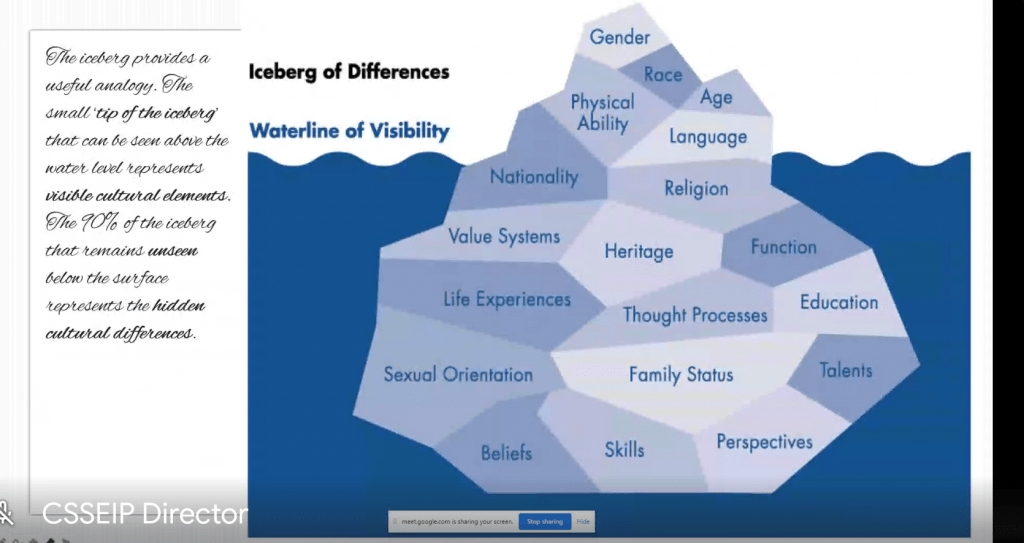 Elizabeth continued explaining that diversity means recognizing everybody’s difference and inclusion means recognizing that everybody is different. “Now the question is how do I then become inclusive? We have to understand that this is a human world, both the genders co-exist and how can we make the best of both,” she added.

Later in the talk, Elizabeth also explained about the “invisible rules” that were established in 1996 by Dr. Pat Hein, an expert on gender differences in the workplace. She continued, “We have certain invisible rules that are already set by us or we have imported those rules from some other part of the world, for example: boys like blue and girls like pink, boys play sports and girls do the house work. In a workspace, if you conduct an interview, a man would be quick to say that ‘I’ delivered this project and ‘I’ have done this but women reduce the word ‘I’ to ‘we’; ‘we’ did this project.” 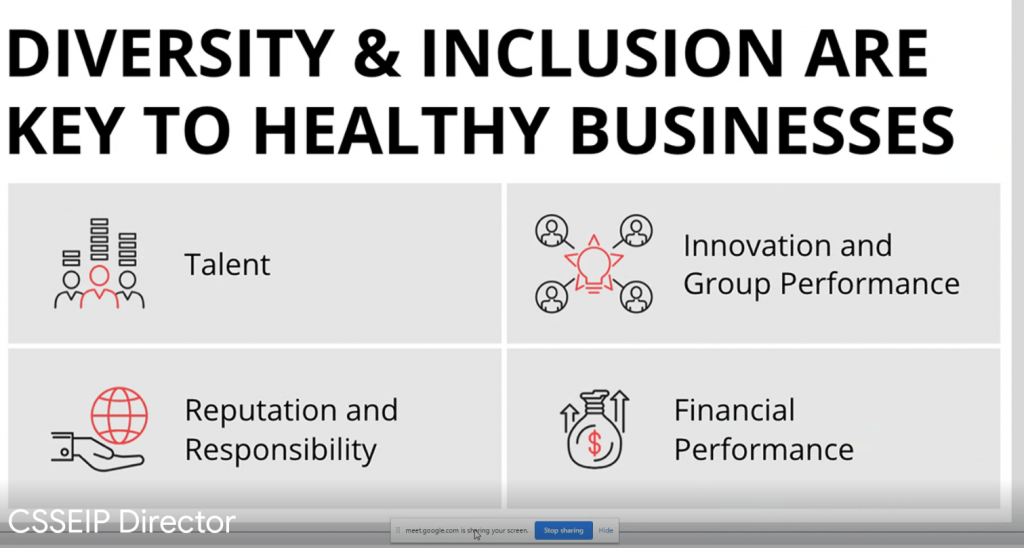 Concluding the talk, Elizabeth spoke about how can Indian Universities help reduce gender inequalities in the workplace, which was scripted by Dr. Rajani Gupta, Vice Chancellor, Symbiosis International University. She said, “Create a conducive ecosystem, make it easy for women to take higher education by providing equal opportunities, testing for multiple skill sets during entrance examinations, providing hostels, security, scholarships, and the like. Universities must make special efforts to identify talent gaps and counsel and train girls for in demand futuristic skills, train women for leadership roles.”