An International Conference on Analytic and Algebraic Geometry has been held in the School of Mathematics & Statistics, University of Hyderabad (UoH) during 23-27 March, 2015. While first part of this Conference was held at TIFR, Mumbai during 16-20 March, 2015, the second part is being held at the University. About 20 national and international participants / speakers have attended this Conference in addition to few local participants / speakers.

This conference has been funded by the National Board for Higher Mathematics (a Unit of Dept. of Atomic Energy, Mumbai), Tata Institute of Fundamental Research, Mumbai and UoH.

Prof. E. Haribabu, Vice-Chancellor presided over the inaugural function of the Conference which was held in the C V Raman Auditorium on 23rd March 2015.

The conference saw a galaxy of internationally renowned speakers who shared their experiences on Analytic and Algebraic Geometry. The speakers who participated are given below with the title of their talk delivered at the conference.

The delegates were taken around to see the grandeur of the city of Hyderabad and especially to Light and Sound Show at the world famous Golconda Fort. 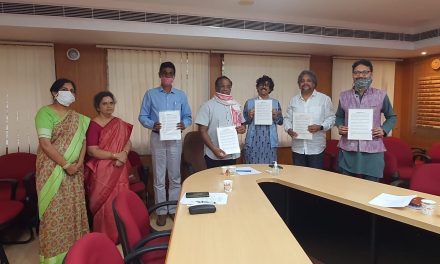