Madrasas and the making of Islamic womanhood 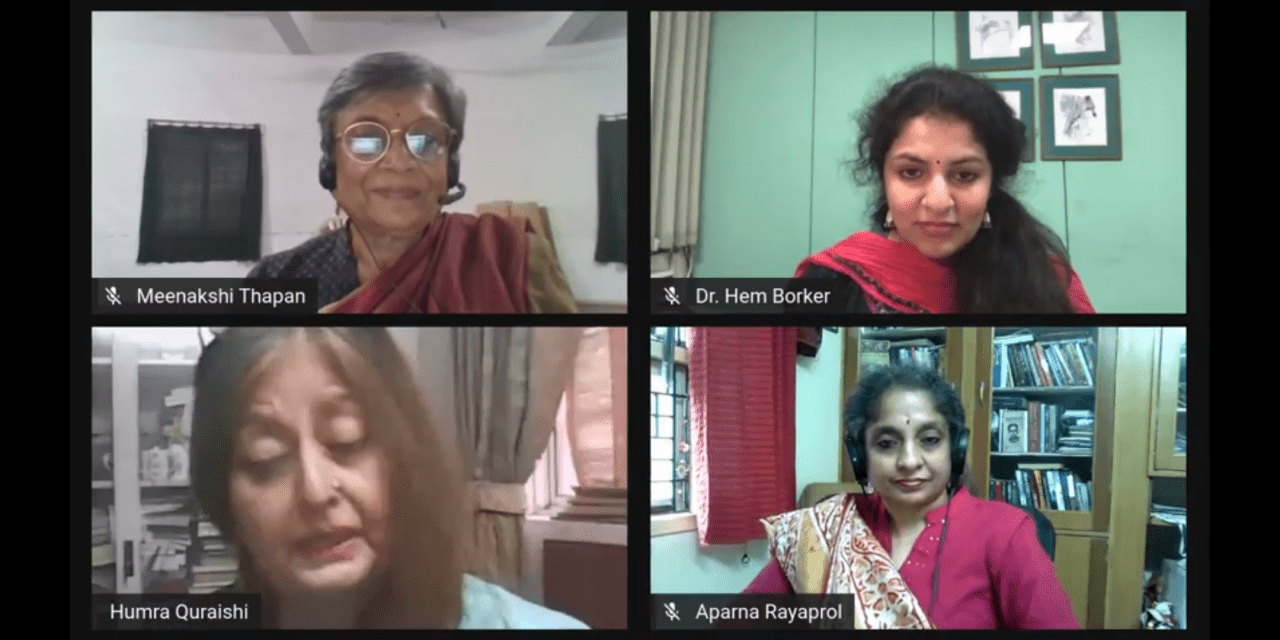 The India International Centre (IIC) organized a webinar on Madrasas and the making of Islamic womanhood on October 28, 2020.

Introducing the panel speakers for the webinar, Humra Quraishi, who is a famous writer, columnist and journalist gave a brief account of Dr. Hem Borker’s book and said, “This book on Madrasas focuses especially on the life of young Muslim girls studying there. And the best part is that Dr Borker has not written it sitting inside a research office, rather she was out in the Madrasas, observing closely for a whole year.”

While, Dr. Hem Borker, Assistant Professor, Jamia Millia Islamia; Clarendon scholar and DPhil, University of Oxford and the author of the book – Madrasas and the making of Islamic womanhood – shared her experiences she had while writing this book.

“My book basically looks at everyday life of women who have studied in girls’ Madrasas. The question that this book raises is what is the relationship between Madrasa education and Islamic gender ideals? The core of this book stems from my field work in Madrasa Jamiatul Mominat, a pseudonym I have used, where I spent almost a year teaching English to the girls there. I also visited a range of Madrasas in various cities of Uttar Pradesh, Madhya Pradesh, Bihar and Jharkhand. The books looks at the educational journeys of these young girls from their homes to the Madrasa and beyond,” said Dr Borker.

She continued reading her field notes from the first day of her visit in the Madrasa and added, “Madrasa play important role in a girl’s life but is something we often overlook. My book focuses on three junctures: the girl’s transition from their natal home in villages and small towns from across India to residential girl Madrasa in Delhi; second is how they find their own aspirations and dreams in Madrasa in five years and the last is transition from a closely scrutinized life in Madrasa to a university.”

Sharing her experience in Madrasa, Dr Borker said, “Parents I often spoke to about sending their daughters to Madrasa said, this sort of school is perfect for our children. This is the place where they can learn about the religious education as well as about the worldly sphere by studying different subjects like: science, maths and English. I think, in times where girls have the fear of moral corruption, Madrasa offer a decent, not co-educational, safe and secure place to thee girls. The Madrasas on their parts understand this demand and need for the multifaceted education and provide a very consumable package. These Madrasas were providing what this society was demanding in terms of how a pious Muslim girl should be raised. This was even inscribed in the physical architecture of these Madrasa, that always had layer of security, strict boundaries, and constant surveillance.”

She continued, “Madrasa had a very fancy computer lab where these girls were explained about different parts of the computer. But, when it comes to the internet, there was no internet available for them. This sort of isolation and surveillance was advertised in the brochures of these Madrasas under the banner of facilities offered.”

Adding her views about this book, Meenakshi Thapan said, “This book seeks to break boundaries and these boundaries are of more than one kind. It takes Islamic womanhood out of the box of tradition, of convention, of victim hood and it also attempts to unravel the complex and multi-layered lives of young Muslim girls. It also shows us that Madarsas for Muslim women are very different from what is usually imagined. They are not only about conventional religious training and not much. The method used by Hem for this book also appeals to me as an anthropologist, she is not a member of the community of these young girls yet she becomes an insider. He gain access to the Madrasas where she does her field work in the usual way: Involved observations, deep interviews; despite what she calls awaaz ka parda that I there is a limit of voice. She has presented a very vivid picture of what goes on in the Madrasas as well as what goes in the minds of the young girls as they pursue their dreams.”

She added, “Hem’s perspective in this book focuses on micro perspectives and is also influenced by the macro and I found the use of ethnographic portraits absolutely excellent because she has successfully addressed the relation between the Madrasa education and girls’ own goals.

Later in the webinar Professor Aparna Rayaprol expressed her thoughts about the book and said, “For me this book is at the intersection of migration, gender, caste, class and community. It is a book that transcends binaries, its a book that tries to look at realities between the sociologists’ traditional ideal. This book tells us that Madrasas is a safe haven where the education that is imparted to these young girls is the education which is embedded in complexities of Islamic womanhood and chastity. I also see a fascinating comparison with colonial ideals of ‘the bhadra mahilas.’ These women are not actually reproducing their religion but an entire culture. The access of being a good Muslim was only given to a man but here the gender binary is being transgressed and one is trying to access something that was available to the men alone. But within their own spaces, where the boundaries of gender, the boundaries of public and private as described in the book, have not been crossed within the Madrasas to a great extent. This kind of a morality or Islamic morality is an education that they will be expected to pass on to the next generation.”

She added, “I see this book as a feminist’ understanding of the woman’s ability to be able to fly out of the traditional nest but keeping in mind their barriers. Lastly, I would have also liked to get a sense of similar situation in other contexts where Muslim women do have this kind of access to the education.”