It was a strange twist of events that brought together a celebrated poet, an ambitious lawyer, and a sprightly Parsi teenager. Sarojini Naidu was the poet, who, amidst the turbulence of the independence struggle, provided a constant and reassuring friendship to Jinnah and his young Parsi bride, Ruttie Petit. The voluminous correspondence left behind by Sarojini Naidu and her daughter Padmaja Naidu, along with letters from Ruttie Petit, formed the basis of journalist Sheela Reddy’s exploration of “the love story that shook India”.

The University of Hyderabad on Saturday evening hosted a reading by The Little Theatre, of the critically acclaimed new book “Mr And Mrs Jinnah: the love story that shook India” by Sheela Reddy, noted journalist and writer. The event took place at the historic Golden Threshold, once the home of poet laureate and freedom fighter Smt Sarojini Naidu.

The book reflects years of painstaking archival research, resulting in a fascinating portrait that blends social history and romance. Readers from The Little Theater brought alive scenes from the book, including some that focused on Petit’s connection with Hyderabad, and with Sarojini Naidu.

The author took questions from the audience—numbering close to 100 and including such familiar names as Vasanth Kannabiran and Rama Melkote—and described her journey through the dusty and forgotten bundles of documents that helped her reconstruct the tragic romance between one of history’s most intriguing figures and the young Ruttie.

The event also marked the revival of the University’s Golden Threshold as an open cultural space. Speaking at the event, Prof B P Sanjay, Pro-Vice Chancellor of the University of Hyderabad, said that The Golden Threshold is being revamped to become a venue for cultural events, a meeting point for intellectual dialogue, and a gallery for creative artists. The building was gifted to the University of Hyderabad by the estate of Sarojini Naidu in 1975 and for many years housed its humanities and social sciences departments. The University has now embarked on a renovation project that will restore the building and the grounds so that it takes its place once again as a place of cultural and intellectual vibrancy. 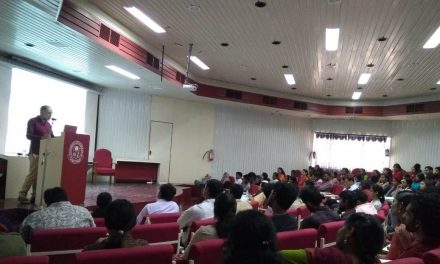