An Open Forum was organized on 18 March 2013 by the Advisory Committee for Student Guidance and Counseling Facility on Violence as Social Pathology: Issues, Challenges and Remedies at the Ambedkar Auditorium on the campus.

Violence, which has become one of the most pressing problems for behavior experts in the 21st century is subject to continuous research not only of psychologists, but also of public health specialists, neuroscientists, sociologists, medics, criminologists as well as of other professionals. Violent behavior needs to be viewed from an individual as well as the broader social context. Causes behind violence may be biological and psycho-social. Hormones like testosterone, transmitters in the brain like serotonin, are a few biological factors that may be mentioned. On the other hand, psycho-social factors predominantly include personality, faulty child rearing practices, socialization process etc. It is necessary to look at a broader perspective integrating all these.  All these point to a need to handle violence from a Bio-psychosocial perspective. The Legislation alone does not suffice so long as there is no awakening in the society and involvement at micro and macro levels. With the incidents of the recent past, and the threat we are constantly living under, a common thought that seems to trouble all of us is what needs to be done?

Dr Soumya Mishra, a senior IPS officer, and Inspector General of Police, Welfare, Andhra Pradesh in her address on the topic Violence: A legal perspective, threw light on violence from a legal as well as social perspective. She emphasized upon the need for social involvement in handling violence and how individually everyone can contribute towards the same by being alert. She said even minimum steps taken by any person gathering the courage like shouting aloud when the help is needed makes a lot of difference. For example a girl in need of help shouting for help aloud and the bystanders paying attention together may contribute towards prevention of a violent incident.

In his address about Violence: a health perspective, Dr. K. S. Ratnakar, Director, Global Medical Education and Research Foundation explained about the pathology of violence from a medical perspective and with illustrative examples showed how it is a social pathology. He said it is important to understand that violence may kill; but silence may also kill if individuals remain quiet about the happenings around. He urged the need for instilling strong core values and recalling the same when any one is in need and thus help in handling the social pathology of violence from roots.

Prof. Meena Hariharan, Director, Centre for Health Psychology, University of Hyderabad, in her address on Violence: A psychological perspective highlighted the several causes leading violence and role of individual and society in handling them. She emphasized upon the role of professional help by Health Psychologists in the aftermath of violence both at individual as well as social levels. Endorsing the importance of alertness, she also highlighted certain crucial strategies to be adopted when victim is approached by a motivated perpetrator. She also emphasized upon the proactive role of the bystanders. She concluded her deliberations focusing on the methods of prevention of violence.

Many students and faculty members of the University including the members of Advisory Committee for Student Guidance and Counseling Facility attended the programme. The programme ended after an interaction session between the invited experts and students, with a vote of thanks from the Secretary, Students Union. 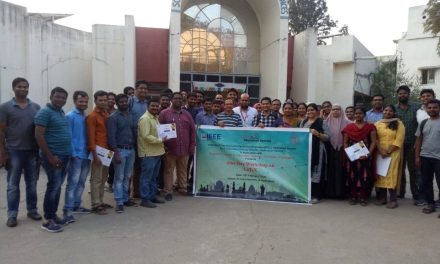 One day workshop on LaTeX