WILD LENS, a group established for the safe guarding the wildlife in the campus and working for the enrichment of biodiversity have in coordination with the security apprehended two poachers at the University of Hyderabad (UoH).

Jillapalli Ravi says that The WILD LENS group got the information yesterday (2nd sept 2015) evening that some people are fixing metal traps near High Rock at the south campus. The members of the WILD LENS group surrounded the area early morning 5:30am on 3rd September 2015 and alerted the security officials about this and finally at around 6:30am cracked down on the poachers.

The poachers caught include Kunchem Yellaih s/o Bangaraiah resident of Gopinagar, Nehru Nagar Colony, Serilingampalli and Rupani Venkanna. Both work for GHMC circle-1 as contract workers near UoH Bus depot. Both have been poaching in campus for some time. Nearly twenty metal traps were fixed and remaining bundles were recovered from bushes nearby. The total weight of the traps recovered were around 2-3Kgs. Two bikes were seized and handed over to forest officials-Mr Satheesh, Mr. Waheed and Mr. Mahesh.

The WILD LENS group established by Jillapalli Ravi, a Research Scholar from School of Life Sciences. It is the group which handed over good number of Poachers to the University Security, Police and Forest department. The large presence of Peacocks, Spotted Deers, Rabbits etc in the UoH campus makes it a hot bed for the poachers.

Wildlife enthusiast and Faculty in the School of Life Sciences at UoH Prof. Aparna Dutta Gupta expressed concern about the poaching activity in the Campus and asked students to be vigilant on such activities and protect the wildlife at UoH.

The WILD LENS group had complained about this to the Dist.Forest Officer Mr. B. Srinivas. Team which caught the poachers are Jillapalli Ravi, Shivendra, Roy Karnati, Maruthi, Venu, Kartik Jirra, Kiran Gundala and Security officials M. Ramulu and Srinivas Reddy. The Security officer Mr.TV Rao acted in time and sent their team in support of students immediately thereby helping the team in apprehending the poachers. 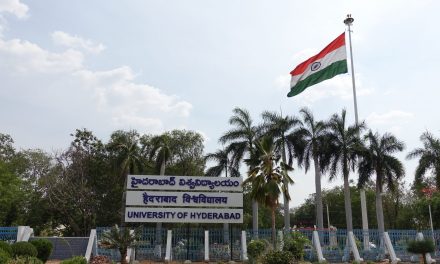 Representing the Indian Past in Comics