The Department of Biotechnology (DBT), Govt. of India has nominated Prof. Ch. Venkata Ramana, Head, Department of Plant Sciences, School of Life Sciences, University of Hyderabad (UoH) as Member of the Scientific Advisory Committee for the National Centre for Microbial Resource (NCMR).

Dr. Venkata Ramana, has found a place in top 100 researchers of India across all disciplines in an initiative to know who are India’s most prolific research publishers by careers 360, a magazine published by the Outlook Group in the issue dated March 2015.

Dr. Ramana has been also mentioned as one of India’s Best Researchers in the field of Immunology and Microbiology. This study was undertaken by compiling the Elsevier Science’s Bibliographic indexing database – SCOPUS for three years (2012-2014). He has been selected based on his publication count and h-index. His research publications output is 11.7 with an impact of 10.7 and has the highest h-index of 8 in the field of Immunology and Microbiology. Last year too Dr. Ramana has been mentioned as one of India’s Best Researcher. He has published his research findings in high impact journals like Int. J. Syst. Evol. Microbiol., Syst. Appl. Microbiol., J. Bact., DNA Res., J. Proteomic Res., Genome Announcements., PLOS1 and Appl. Microbiol. Biotechnology. He received the prestigious TATA Innovation Fellowship from the Department of Biotechnology, Government of India in 2016. In recognition to his outstanding contribution to the taxonomy of bacteria, The Ministry of Environment, Forest & Climate change has honoured the prestigious Dr. E.K. Janaki Ammal National Award for Microbial Taxonomy in the year 2016.

Dr. Ramana works on bacterial diversity and metabolomics. He is indexing the bacterial wealth of India and assessing the assets and liabilities of bacteria and their metabolites. He feels that India has spent enough time in indexing the macro-life (Plants and Animals) and it’s time to index the micro-life (Bacteria, fungi and viruses) and closely understand their psychology in regulating all major life forms and ecosystems.

The NCMR was formerly known as Microbial Culture Collection and is funded by the DBT, Govt. of India. It is currently a part of National Centre for Cell Science. Pune and is an affiliate member of the World Federation for Culture Collections (WFCC) and is registered with the World Data Centre for Microorganisms. The main objectives of NCMR are to act as a national repository of microbes, to supply authentic microbial cultures and provide related services to the scientific community working in research institutions, universities and industries.

NCMR is recognised by the World Intellectual Property Organization (WIPO), Geneva, Switzerland as an International Depositary Authority (IDA) on April, 2011 and is also a designated repository of Ministry of Environment and Forests and Climate Change, Govt. of India and second largest in the world. It is amongst the topmost provider of services to the nation in the field of microbial systematics and is actively involved in research in the field of culture preservation, microbial ecology and systematics, bioinformatics and other allied branches of microbiology. 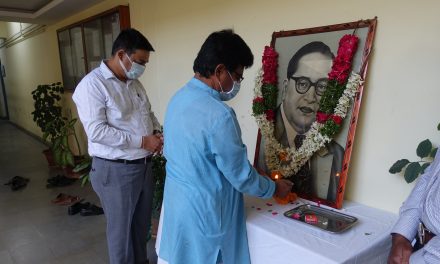