Prof. Prakash C. Sarangi, senior professor in the Department of Political Science, School of Social Sciences at the University of Hyderabad (UoH) has been appointed as the Vice-Chancellor of Ravenshaw University, Cuttack, Odisha. He has taken charge on 1st January 2015.

Prof. Sarangi holds an MA from Delhi University and a Ph.D. from the University of Rochester (USA). He has been teaching since 1975 and became a Professor in 1998. He was faculty of Utkal University, Bhubaneswar and was an Academic Fellow at the American Studies Research Centre, Hyderabad before joining the University of Hyderabad in 1987. He was Head of the Department of Political Science during 2004-2007 and was the Director of Study in India (SIP) Programme during 2006-08. Prof. Sarangi was also the Pro Vice-Chancellor and Registrar (i/c) at UoH.

Prof. Sarangi’s academic interests revolve around Democratic Theory and Practice. His current research is on the impact of globalization on democratic politics and institutions. 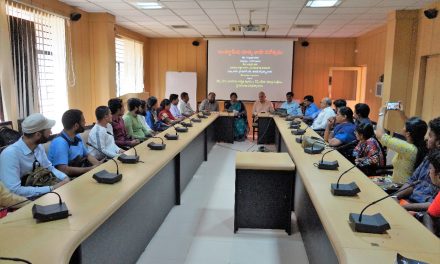 Cultural diversity is preserved only through mother tongue

Sangeeta Kumari to present a paper at Germany