The University of Hyderabad organized a Distinguished Lecture by Professor Sue Lin-Chao titled “The mystery of the glycolytic enzyme enolase in the RNA degradosome of Escherichia coli” on February 1, 2018 at the Auditorium, School of Life Sciences, UoH.

Prof. Sue Lin-chao while delivering the distinguished lecture shared her research experiences, with the faculty and research scholars, over the past two decades and presented the significant contributions and findings made by her related to a RNA degradation machinery, RNA degradosome in an enterobacterium, E. coli. She also demonstrated the role and association of a glycolytic enzyme with RNA degradosome complex, which has been a mystery since many years. She has narrated her findings on how enolase association with RNAseE regulates the shapes of bacteria between rod to filamentous forms. Prof. Lin-Chao said that such enolastic-degradosome mediated cell filamentation is linked to bacterial adaptation and pathogenicity under anaerobic conditions in the human gut.

The lecture was presided over by Prof. Appa Rao Podile, Vice-Chancellor, UoH, while Prof. Dayananda, Senior Faculty at the Department of Animal Biology introduced the speaker and Prof. J. S. S. Prakash, Department of Bio-technology & Bio-informatics proposed the vote of thanks.

Dr. Sue Lin-Chao was born and educated in Taiwan. Working with Professor Hans Bremer, she completed her PhD work on control of ColE1 plasmid replication and the copy number of plasmids. Subsequently, she worked with professor Stanley Cohen at Stanford University to develop a mammalian gene trap system using bacterial lacZ as a reporter gene and retrovirus as a gene delivery system, which has become the prototype gene delivery system used in gene functional studies in eukaryotic cells.

In 1990 she returned to Taiwan and established her lab at the Institute of Molecular Biology, Academia Sinica, working to extend her studies of RNA degradation machinery in E. coli to mammalian systems and disease.

She has received several awards for her research. In 1995 she was awarded the 33rd Annual Republic of China (Taiwan) Ten Outstanding Young Persons Award. In 1997 the competitive Academia Sinica Young Investigator Award. In 1999, she was elected to both the Asia-Pacific International Molecular Biology Network and the Sigma Xi Honor Society. Between 1995 and 2012 the National Science Council of Taiwan recognized her work with Outstanding Research and National Frontier Research Grant Awards. Her lifetime research achievements were recognized by the Ministry of Education of Taiwan with their 53rd Academic Award and Merit MOST Research Fellow Award, by the Ministry of Science and Technology, Taiwan. She was awarded the 2013 TWAS Prize in Biology.

She was the founded director of the department of international affaris of Academia Sinica (2007-2016) and responsible for international coopreation and Taiwan International Graduate Program. Dr. Lin-Chao has authored 73 peer-reviewed papers and two invited book chapters with over 3500 citations. She has served as an ad hoc reviewer for Nature, PNAS (USA), RNA, Current Microbiology, Molecular Microbiology, Genome Biology, JBC, MGG, TiBS, and BioMed Central JBMS. 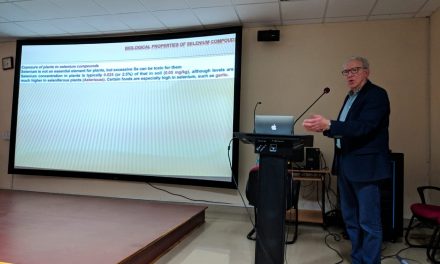 Dr. V. Chakravarthi invited to be on the Editorial Board of NRCR