Prof. Ajailiu Niumai, Head, Centre for the Study of Social Exclusion & Inclusive Policy at the University of Hyderabad has been invited as a panel speaker on 26th March 2022 in the National Seminar on “Racial Diversity Sensitisation,” organized by the National Commission of Women (NCW), New Delhi in collaboration with the Bureau of Police Research & Development, National Commission for Minorities and Special Police Unit for North-Eastern Region (SPUNER) of Delhi Police to spread awareness and sensitize about different cultures in India. It attempts to recommend strategies for strengthening mutual understanding between diverse cultures in India. The Minister of State for External Affairs and Education Shri. Rajkumar Ranjan Singh, Dr. Rekha Sharma, Chairperson of the National Commission for Women (NCW), Officiating Chairperson of the National Commission for Minorities Ms. Syed Shahezadi, Director General, BPR & D Shri. Balaji Srivastava, and Shri. Hibu Tamang, Joint Commissioner of Police, SPUNER, New Delhi were the distinguished delegates at the inaugural function held at Vigyan Bhavan, New Delhi. 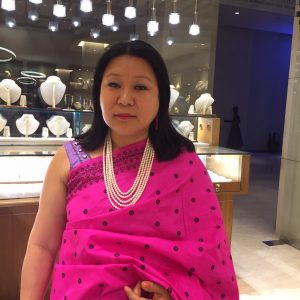 Prof. Ajaliu Niumai mentioned that the racial approach towards the people of North East India stems from ignorance and the North East Indian distinct cultures are seen as a threat to the culture of mainland people, which has led to the othering of people from the North East region. As a result, many racial incidents have led to violence, and the victims are the North East people – be it individuals or communities. She emphasized that when we talk about inclusion and diversity, it does not mean giving few scholarships and government welfare schemes to the excluded people, but going beyond and deep into the very nature of the society. It has to be done by living and imbibing the culture of the excluded people to make them included in mainstream society. The difference between the Aryan, Dravidian, and Mongoloid racial groups cannot be wished away – it cannot be changed. But, the mainstream Indians and people in the North East region need to accept each other and celebrate their differences by upholding the spirit of multiculturalism and ‘unity in diversity.’