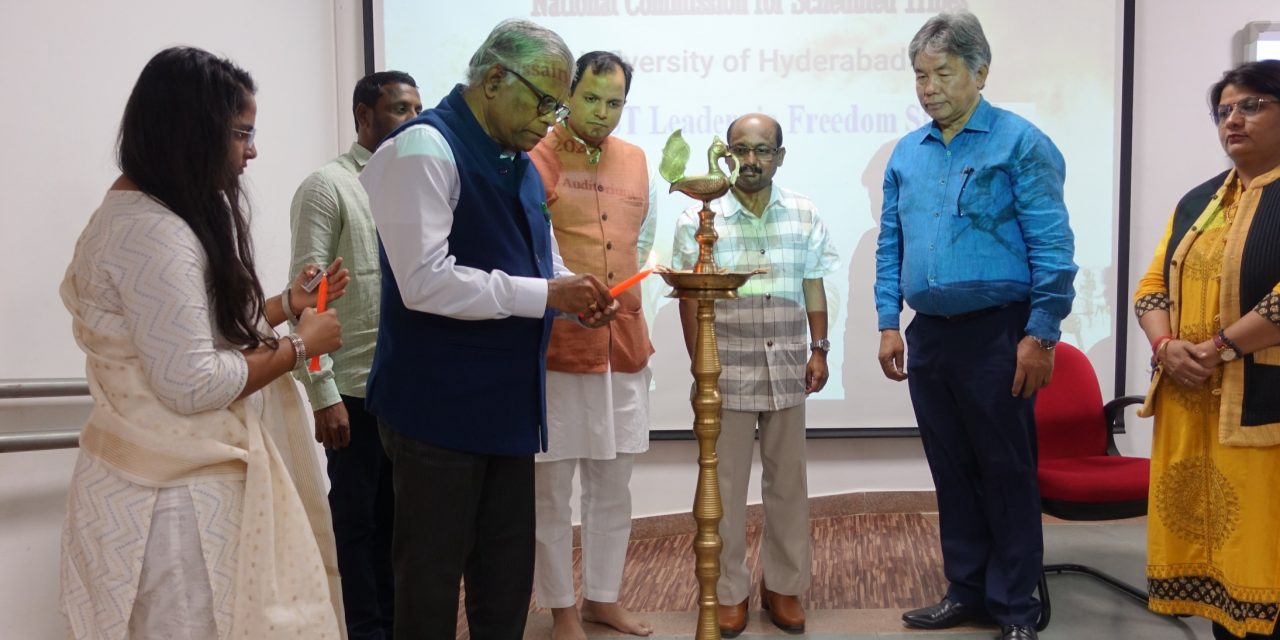 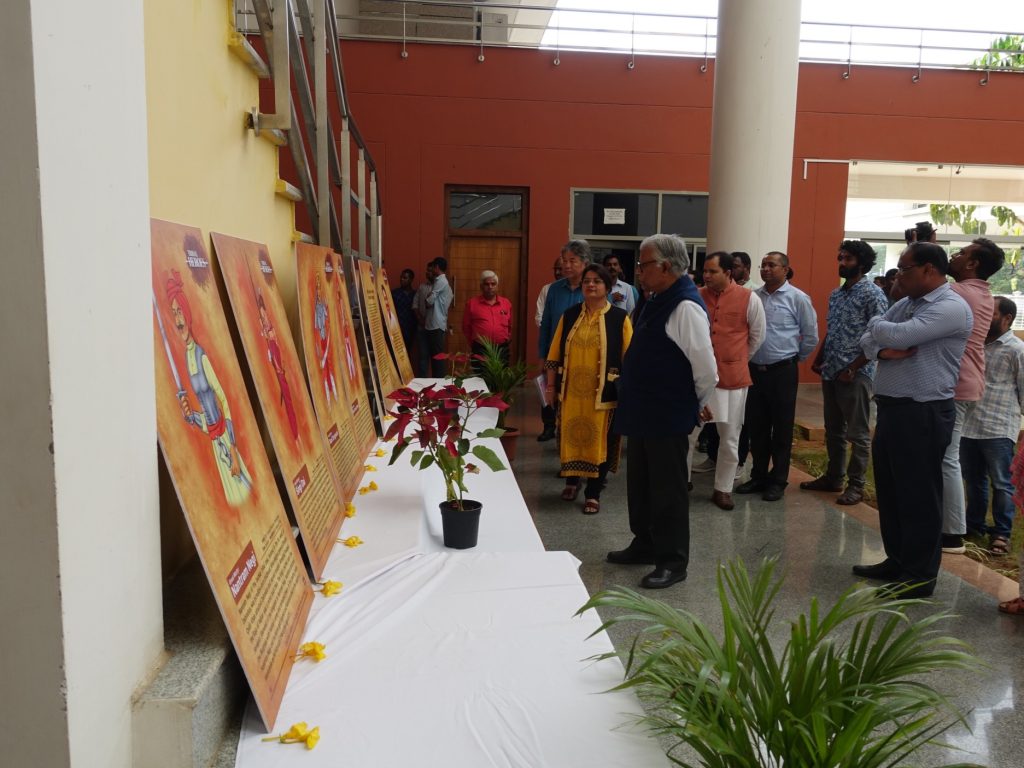 Prof. Tanka Bahadur Subba was the chief guest to deliver the lecture. Dr. Subba was former Vice-Chancellor of the Sikkim University and is a now Visiting Professor at the Taylor’s University, Malaysia. Among others, he was a recipient of the Homi Bhabha Fellowship (Mumbai). Dr. Subba authored 18 books and published 75 articles on various issues related to the eastern Himalayas. 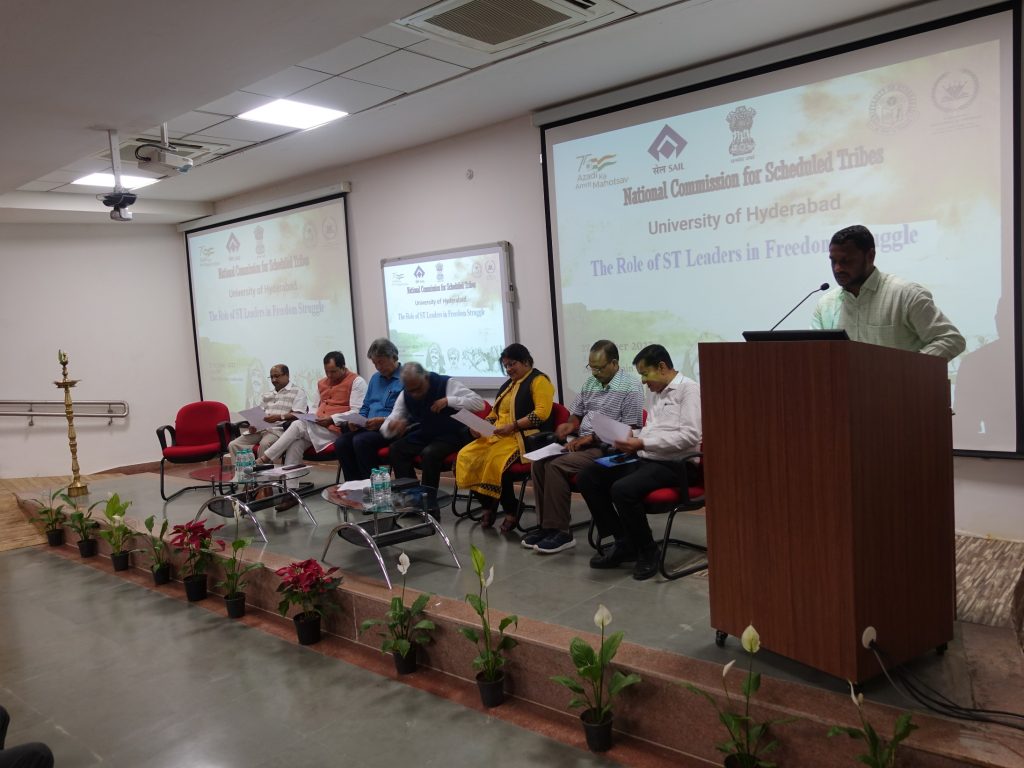 The representative of NCST, Dr. Seema Singh, Honorary Advisor to NCST was also a part of the program along with Shri Lakshman Singh Markam, Deputy Secretary of the Hon. Chief Minister of Madhya Pradesh. The Vice-Chancellor of the University of Hyderabad, Prof. B.J Rao, Dr. Devesh Nigam, Registrar and Controller of Examinations I/c, Asst. Prof. Dr. Veerababu, and other dignitaries shared the dais. 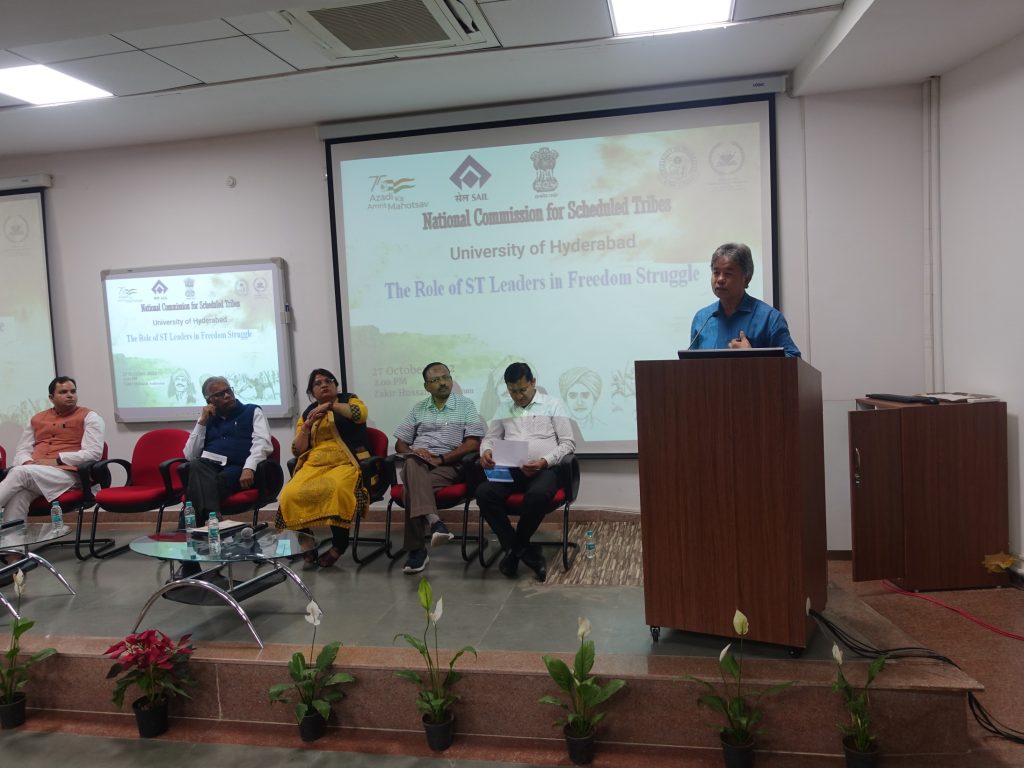 While addressing the audience, Dr. Seema said that “this particular topic (contribution of scheduled tribes) is almost untouched by academicians and the general public and these lectures aim to ignite young minds to acknowledge history and pursue research in Tribal cultural models, identity and traditional knowledge studies.” 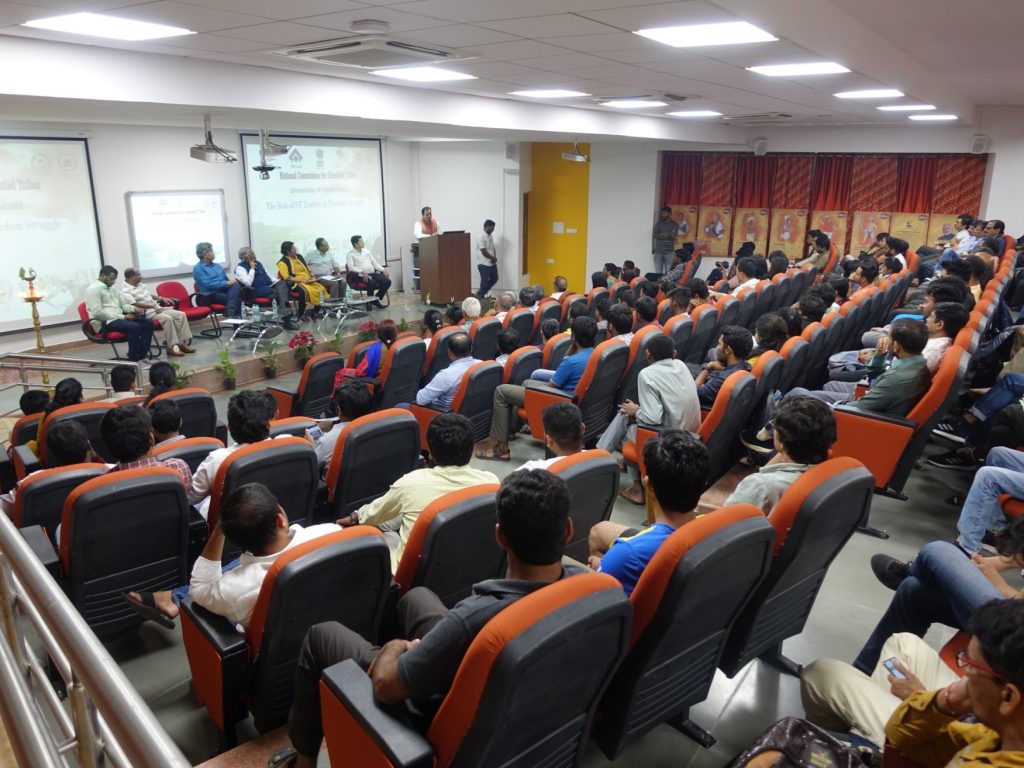 She reiterated that the British, to advance their interests, branded the tribal or rather vanvaasi societies as backward and uncivilized, just because they didn’t fit into the traditional western definition of “developed”. She talked about various legislations which were put in place to safeguard the interest of the Scheduled Tribes in India in the later part of her talk. 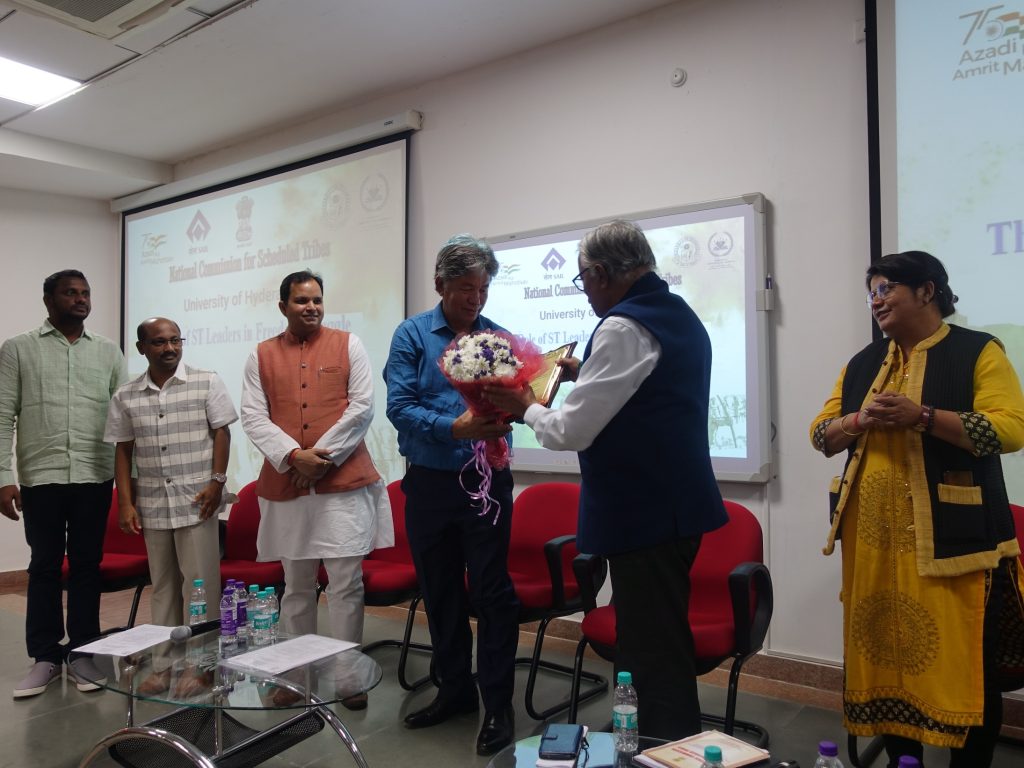 Soon after the introductory speech by Dr. Seema, a video was presented explaining the functions of NCST which was followed by Shri Lakshman Singh Markam’s talk. He talked about the perception of tribals versus reality and whether it was Bollywood’s depiction or the people’s perception. He also talked about Rani Durgavati, Komuram Bheem, Birsa Munda, and other tribal freedom fighters.

The address was followed by an interactive session with the audience which dealt with various issues like language conservation and scheduled tribe status. 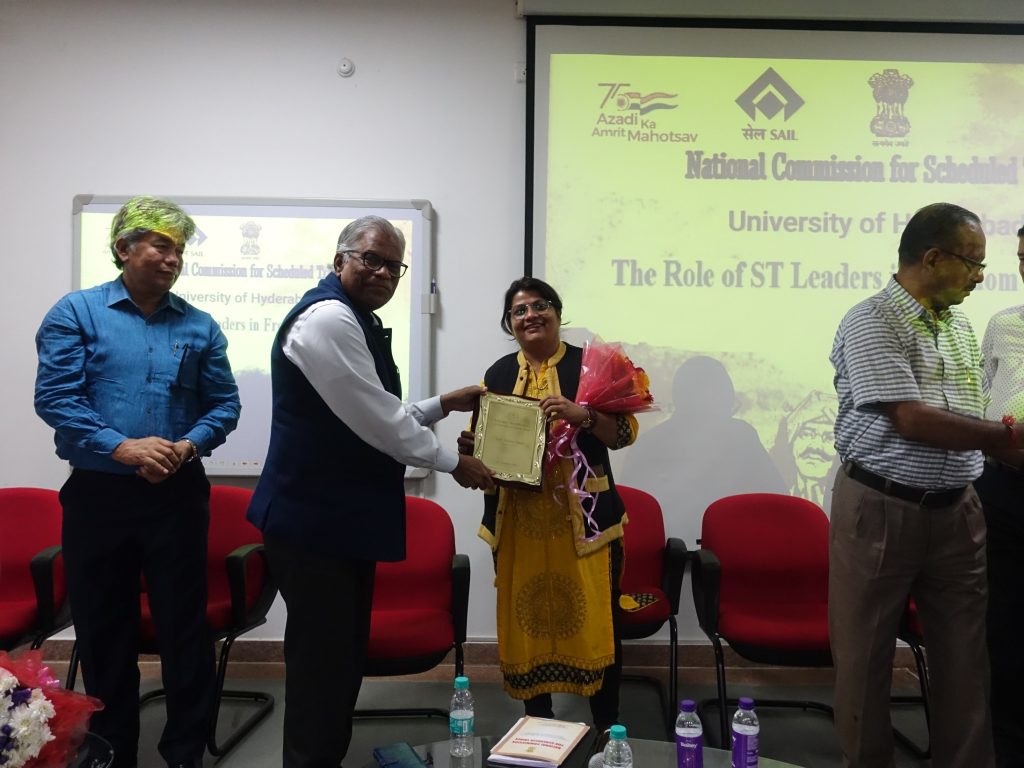 Dr. Subba’s lecture attempted to answer several questions and pose some more to the audience. He pointed out that the participation of the tribes was not as much as one would expect, as the tribes fought for their own rights and were against excessive taxation by the British.

“The tribals did not trust the plains people there was mutual distrust even after independence” he explained. He talked about rampant discrimination which had prevailed and which is still prevalent to this day, about how mainstream stereotypes the people of the northeastern”, said Dr. Subba.

He observed that the message of freedom and nationalism was not spread evenly across India. “The efforts to include the tribes people in the freedom struggle were not sufficiently made. The sparse population of the areas had discouraged inclusion. All these reasons had resulted in weak participation of the tribes in the movement.” he elaborated. 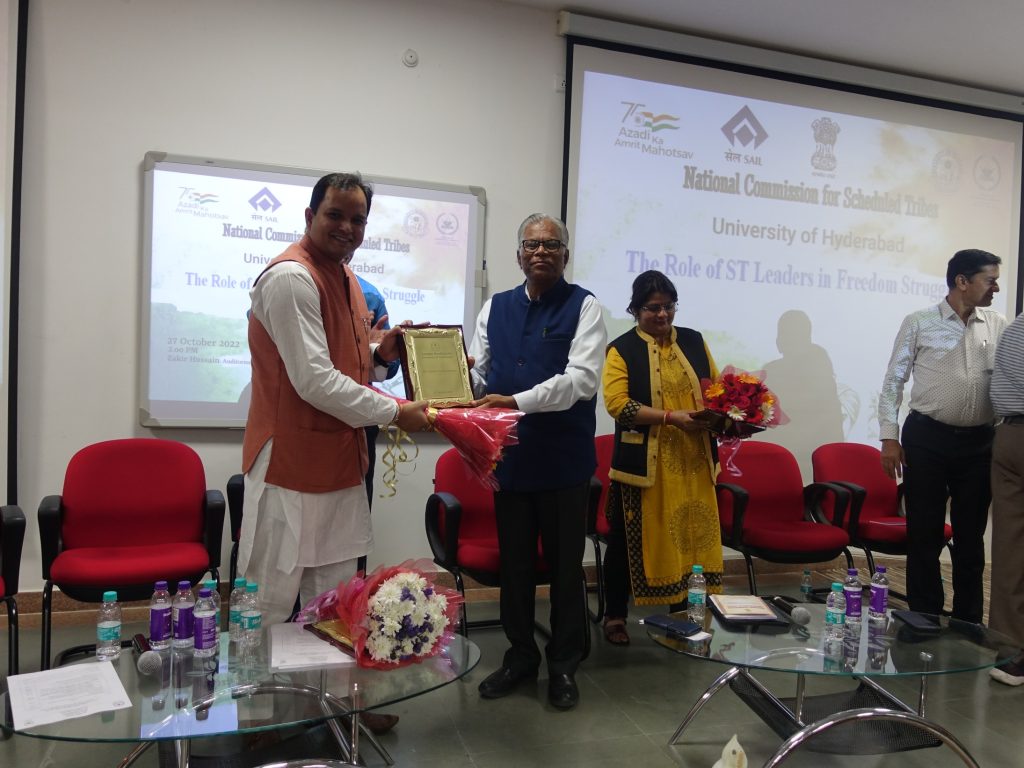 Nevertheless, the participation of some tribal leaders was recognized by Dr. Subba. Heroes like U Tirot Sing, Rani Gaidinliu from the northeastern region, and Alluri Sitha Ramaraju from central India were mentioned and lauded by him.As a concluding statement, he said “they (tribals) took on the mighty British forces, they knew that war would not be equal.” 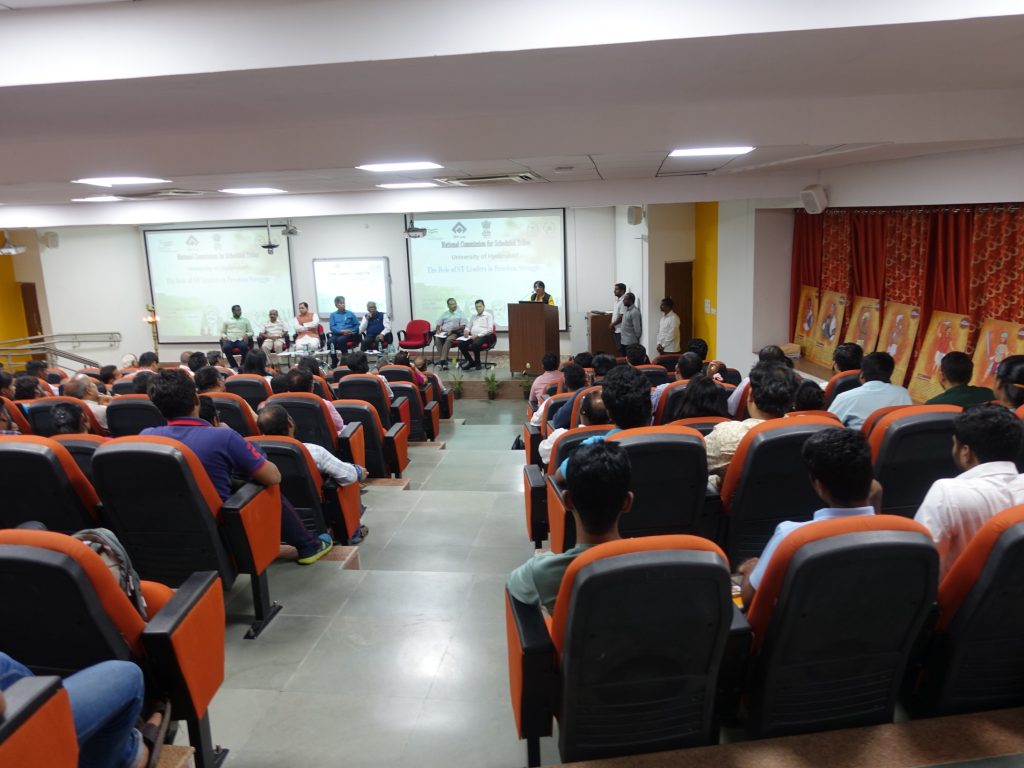 “The difference of opinion is required so that churning happens and knowledge comes out of it,” Prof. B.J Rao said while addressing the students. The tribals struggled against oppression which was a fundamental struggle.” He remarked. 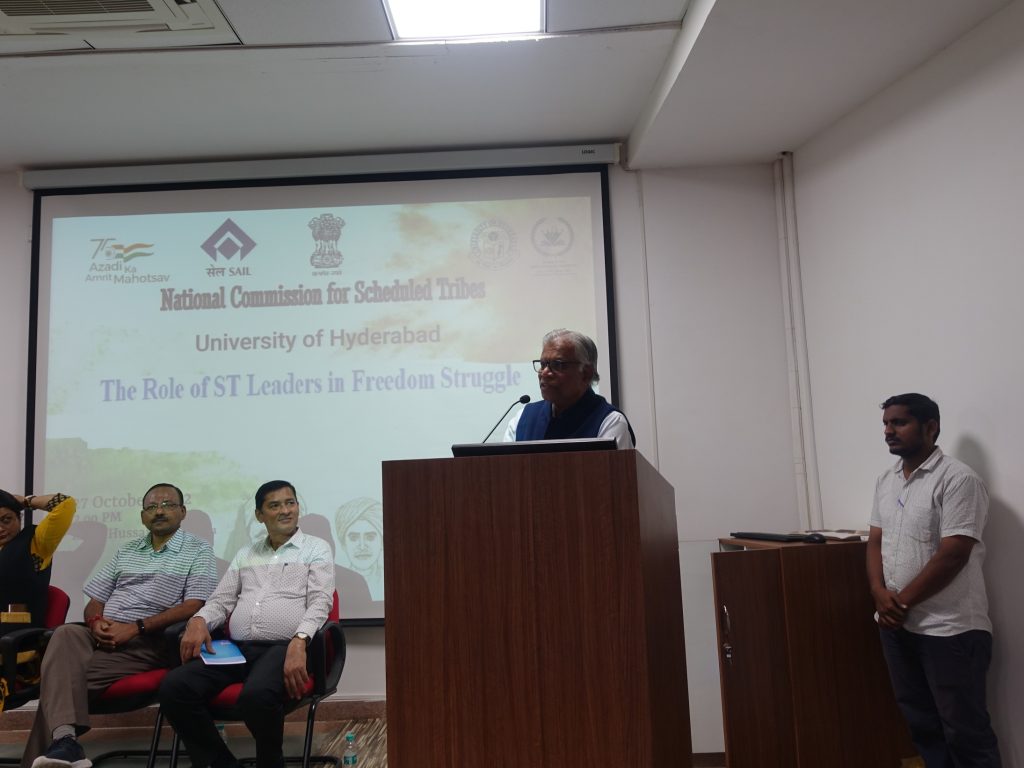 Dr. Subba, Dr. Seema Singh and Shri Lakshman Singh Markam were felicitated by Prof. B.J Rao and the discussion witnessed the enthusiastic participation of faculty and students of the University of Hyderabad.