The Centre for Women’s Studies, University of Hyderabad (UoH) organised a special screening of Kim Longinotto’s award winning documentary Salma (2013) on 15th March, 2014 at the School of Humanities Auditorium. On behalf of the CWS, Dr. Deepa Srinivas welcomed the audience. The director of the film, Longinotto is a much acclaimed British documentary film maker who has earlier made many films on women and gender issues.

More information on the director is available on (http://en.wikipedia.org/wiki/Kim_Longinotto).

Salma, the film is on the life of the Tamil poet Salma. It has been screened at several international platforms and won many prestigious awards. The film tries to bring out various aspects of Salma’s personal life and career as a poet/writer and ground level politician. It’s a journey of a Muslim woman who comes from a small place in Tamil Nadu. Salma has been presented as an exceptional woman who has challenged the existing notions and traditions. The film is an extraordinary journey which she has travelled and came out as a ‘progressive’ and successful woman. The film explicitly discusses issues like women’s suppression, education, Muslim customary practices etc. It has overtly shown the argument that has been going on between both the genders.

The poet, Salma was also present at the programme. After the screening there was a candid discussion with her on the film and her writing and other aspects. Students and Scholars discussed issues like patriarchy, male domination, society, tradition and so on. The poet said, the movie is not about her life only, but about every woman. Everywhere it is more or less similar and thus the film portrays the universal pain and suffering of the women in society. Many in the audience recognized Salma as an inspirational personality and rated the film heart-warming. Some of the issues highlighted in the film can be viewed at (http://www.wmm.com/salma/).

Production and Reproduction is a patriarchal construct: Uma Chakravarti 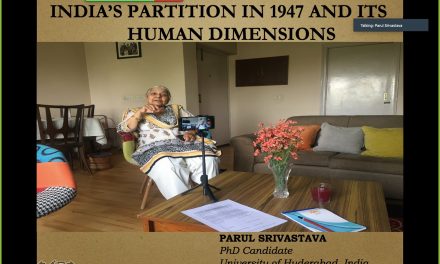