Staff and students of the Centre for Comparative Literature gathered together for the 3rd Sujit Mukherjee Memorial Lecture that was delivered by Professor Sukanta Chaudhuri and attended by Sujit Mukherjee’s daughter, Rohini Mukherjee, at the School of Humanities (UoH) on February 12.

Professor Pramod K. Nayar, Head of the English Department, shared his recollections of Sujit Mukherjee. He fondly remembered him as a man who had the ability to effortlessly straddle a wide range of disciplines and felt Ram Chandra Guha’s obituary for Sujit Mukherjee described him the best, “The standard Indian academic writes prose that is so tragic and then there is Sujit Mukherjee who writes such lucid prose.” He also found Sujit Mukherjee’s writings on cricket as particularly interesting because it captured his enthusiasm for the sport instead of only being journalistic or academic. Professor Nayar spoke of Sujit Mukherjee’s sense of literary history that he had put together along with his other work as things that have stood the test of time and will continue to let scholars approach “the unmappable field of literature” through his work.

Professor Sukanta Chaudhuri, an internationally renowned scholar of literature and Professor Emeritus at Jadhavpur University, spoke on the topic “My Tagore, Your Tagore: Translation and Textual Identity.” He recalled some of his own memories of Sujit Mukherjee and cited him as an inspiration for promoting wider cultural sensibilities and cultural consciousness in our society.

Professor Chaudhuri gave a variety of examples from historic and contemporary literature of India and Europe to explore the efforts made in the past, the complications and challenges associated with translations. Professor Chaudhuri explained that in a perfect world, there would be no need for translation but since we are far from it, every act of translation is a step towards that ideal world. He ended by responding to some of the questions posed by the audience.

The lecture was organized by the Centre for Comparative Literature. 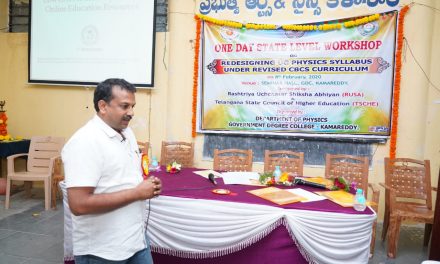