The Constitutional Vision of Education vs Neo-liberal Assault on India

Prof. G. Hargopal introduced the speaker as a very important personality in taking forward the movement to ensure quality education for all and described him as a person with very rare combination of philosophical disposition and conviction for great social change.

Prof. Sadgopal started his lecture with presenting his experience in his last engagement with the Govt. on preparing the Right to Education Bill. He submitted that the Govt. had not been willing to discuss about private schools on the ground that they don’t get any grants from the Govt. He rejects this proposition and argues that the Govt. does monitor liquor shops, taxi and auto-rikshaws and other many such entities even though they are not funded by the Govt as that is concerned with citizen’s welfare. He maintained that in his 10 months engagement during this period, the Govt. didn’t take any of his points. According to him, Right to Education (RTE) act in its current form doesn’t stand for enabling people to claim their constitutional entitlements but it is more to satisfy neo-liberal attacks on the country.

The preamble to the Constitution of India unfolds the entire vision of education for building citizenry for a “Sovereign, Socialist, Secular, Democratic Republic” which would play a crucial role in the struggle for “Justice, Liberty, Equality and Fraternity” for all sections of society. Article 45 (now amended) of the Directive Principles of State Policy (Part IV) of the Constitution of India, directed the state to provide free and compulsory education to all children upto 14 years of age, including those below six years of age, within 10 years of the commencement of the Constitution- a direction the state has completely failed to fulfill till date.  Supreme Court of India, in its two successive judgments in 1992 and 1993 held that Part III (Fundamental Rights) of the Constitution has to be read in “harmonious construction” with Part IV (Directive Principles of State Policy) and that the Fundamental Rights provide the means to achieve the goals enunciated in the Directive Principles. This historic judgment significantly enhanced the power and scope of the Constitution. The same judgements also held that the Right to Education does not stop at the age of 14 years i.e. at Class VIII but continues well beyond to include higher education as well as long as it is “within the limits of [state’s] economic capacity and development”.

Post the Supreme Court judgment, many committees were formed to deal with this situation under successive governments from 1993 and 86th Constitutional Amendment took place in 2002 which inserted the article 21A namely, Right to education:

“21A. The State shall provide free and compulsory education to all children of the age of six to fourteen years in such manner as the State may, by law, determine.”

Prof. Sadgopal criticized the conditionality put in this article itself and emphasized that this only helped in preparing base to support the systematic neo-liberal attacks on our education system.

Today, it’s very important for a child to complete 12 years of education as without completing this level he/she can neither go for any modern job nor he/she can go for higher education. Eight years of education for children for 6 – 14 years age group under the provision of the Right to Education act doesn’t bring much hope. Out of the children enrolled in Std. I, only 6% tribals, 8% dalits, 9% minorities and 10% OBC students are able to complete Std. XII. It’s primarily due to incomplete vision of education that even after six decades, we’ve not been able to ensure Right to Education in true sense.

Under structural adjustment conditionalities, as dictated by World Bank- IMF, public expenditure as percentage of the GDP on education, poverty elimination, health services etc have gone down in successive years, these basic entitlements are getting converted into services and are systematically being commoditised  as tradable goods in the global market. Despite people’s resistance, several neo-liberal agendas in education are being implemented:

We never recognised the effectiveness of providing education in our mother tongues. It would have led to a very inclusive picture if a fully empowered National Translation Commission would have been instituted in 1960 with full financial support to translate best educational resources at all levels of education in various Indian regional languages. This would have ensured a much better sense to appreciate diversity in unity that India stands for. There is no problem in learning English in a school where medium of instruction is not English; except in South Asian region, all parts of the world prefer teaching in their own native language.

The neo-liberal policy framework is in total contradiction with the aims and objectives of the Constitution. The conception of ‘social democracy’ combined with ‘social justice’ and ‘social welfare’, as articulated in the Preamble and provided for in Part III and IV and further strengthened by the Schedule VIII of languages, face the risk of being diluted, distorted and finally dismantled if neo-liberalism is allowed to decide destiny of India. The same Constitution which was dubbed for decades after independence as a bourgeois Constitution, and not without some justice, has now become a powerful instrument for building people’s resistance against the neo-liberal assault, thereby retrieve the idea of sovereign, socialist, democratic republic.

The lecture was presided over by Prof. Ramakrishna Ramaswamy, Vice Chancellor, UoH. 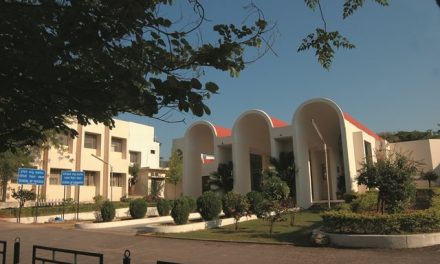