The death of news television in India 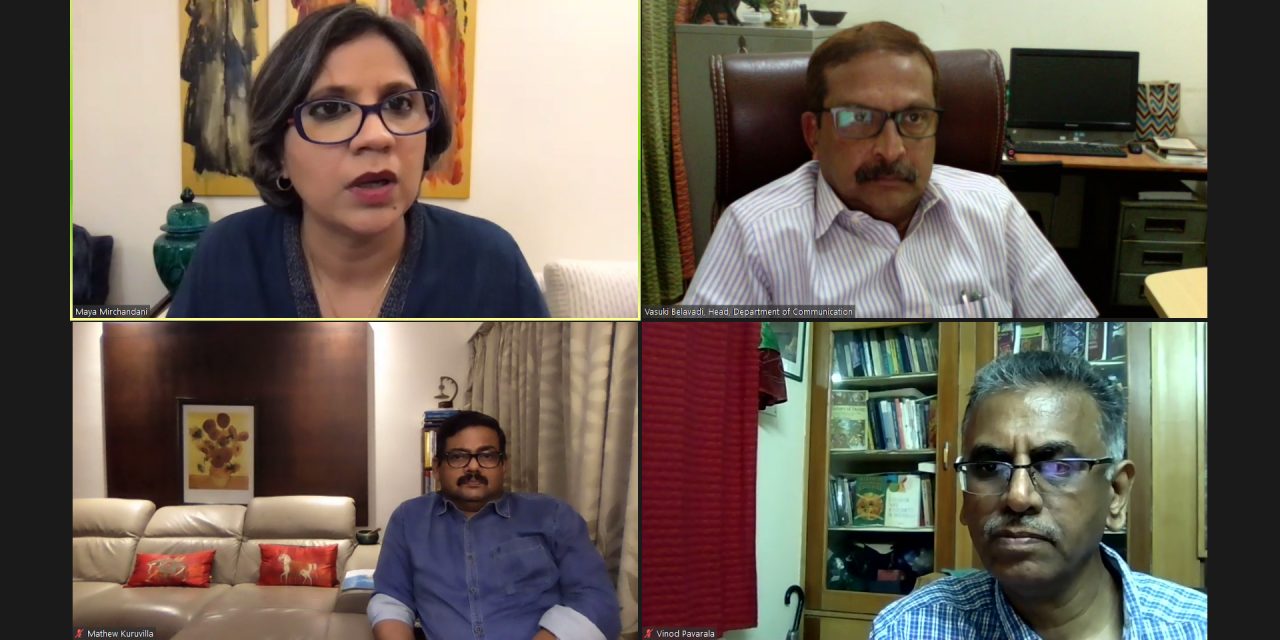 “A part of me still wants to believes that the values of news television continues to guide many people and is still alive even if today it seems like they are lying under the rubble of noise, sensationalism and propaganda,” said Maya Mirchandani, an award-winning Indian journalist who now teaches Media Studies and Broadcast News at India’s premier Liberal Arts institution, Ashoka University.

Maya Mirchandani delivered a lecture on “The death of news television in India” at Dr CVS Sarma Memorial lecture series organized by the Department of Communication, University of Hyderabad (UoH) on September 26, 2020, to commemorate Dr CVS Sarma, who was one of the founding members of the department.

Addressing the introduction of the lecture series, Prof Vasuki Belavadi, Head, Department of Communication, UoH, said, “Before joining UoH in 1987, Dr CV Sarma taught at Osmania University, Hyderabad and also at Padmavati Mahila Vishwavidyalaya, Tirupati. One of the special things about Dr Sarma was that he started teaching things like script writing, television analysis and he was also a good fiction writer. It was unfortunate that we lost him in the year 2002 after he battled cancer at the age of 48 years. We also miss his father who passed away recently. He used to be a part of CV Sarma Memorial lecture series, but we have with us today his son Tarun Sarma.”

She added, “The Print media, especially in the West, has found revival and TV has also played its role equally. The social media and television has mapped some of the greatest numbers in terms of the information sharing – the professionals doctors have been imparting knowledge, information, awareness and critique of both national government and international policies towards tackling the pandemic. So, it has been a good time for journalism in general.”

Talking about it further she said, “The issue today is not about value and power of media, rather it is the process of decision that goes into deciding the headlines on any given evening we know that the TV’s power is both positive and negative. In fact this duality of power precedes the times we are in and as in the past and today as well the power flows from politics. The more divided our political sphere is the more divided is the media landscape.”

Sharing her own journey in the field of journalism for over 2 decades, Maya Mirchandani highlighted how the private broadcast media proliferated in India and how broadcasting policies changed over time. “Earlier the priorities of a reporter while reporting on the field was to become a part of that story ourselves. But when you fast forward to today, I think the truth really is that the reporter will first make sure that there is an image or shot of them in the frame and ensuring that they say – we were here, I chased this particular individual, I am trying to get you the story. The ‘I’ has become the focus of broadcast.” 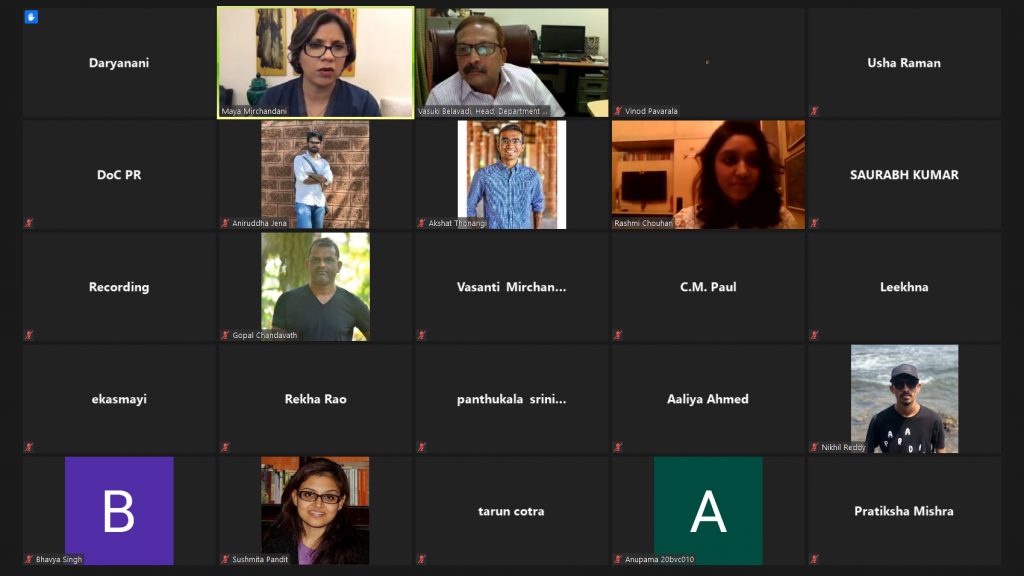 “Going back to 1995, broadcast journalism was a physically strenuous work. We used to go out on field, we brought pictures and voices to the viewers from far off. Then coming back to the newsroom and editing our interviews and piece of work for hours and hours,” she said.

Pointing out how source of revenue played a vital role in the media organizations, Maya said, “When the revenue models for broadcast media changed, corporate advertising became the key source of revenue, profit and sponsorship model began to dictate the news budget. In the quest for profit in an overcrowded market of news channels, there were several choices possible for funding and different channels chose different modes but the nature of funding has dictated the nature of product that the channels brings out. We know now that the media economics has collapsed and governments needs not to resort to any overt censorship because the power of 2500 crore of advertising budgets function both as a carrot and as a stick. The government has essentially become single source funder for television cross the country.”

Giving a comparison of how Indian broadcast journalism was initially and what it has become today, Maya said, “We feel repulsed when a Bollywood suicide story becomes the only news for weeks on the nightly news or when you have channels obsessed with the narcotics bureau interrogating an A-list actress, while farmers are spilling out on streets, there is an agricultural distress, in midst of pandemic, in the midst of economic crisis, in the midst of a war-like situation with China.”

But then there was a time, she said adding, “when political corruption was a potent public issue that was brought to the forefront by television news channels. TV news channels were talking about the coal scam, the 2G scam, commonwealth games scam and there was a sense of purpose in the fact that you were using your own journalistic endeavour to talk about issues that made a difference.” 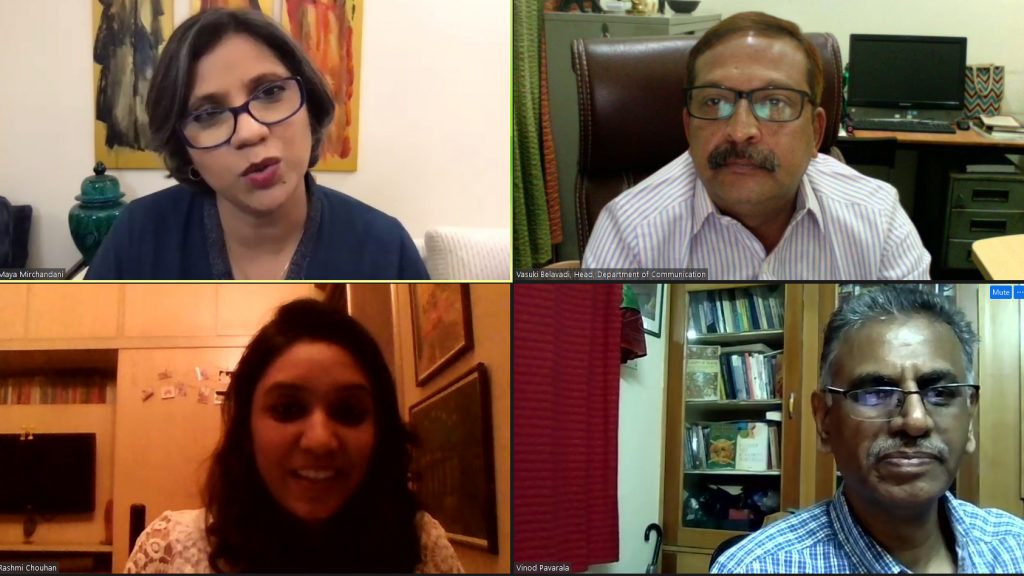 “So due to this budgeting crunches in news channels where field reporting has become expensive, we have moved everything into a studio debate where everyone is shouting and screaming at each other and not really allowing anyone to listen to what the argument is,” she mentioned.

Concluding her lecture she said, “Where do we go from here? Do we want to see regulatory bodies with more teeth? The worry is if we do not look for ways to give more teeth, more spine to these regulatory bodies, we are running the risk of bringing in government control in a way that we don’t really want. Also, when we talk about regulations, we not only point at traditional media including TV and Print but also the social media platforms as well. We therefore need someone to be able to judge, may be an ombudsman who is outside the system who can make an honest judgement of what is right and what is not, what violates the IPC and what not, what violates our constitutional principles and what not. Our challenge today is not so much about finding ways to fund independence journalism but finding ways to revive the values of traditional media, find ways to improve their funding models, find ways to revive the consumers need for better news content.” 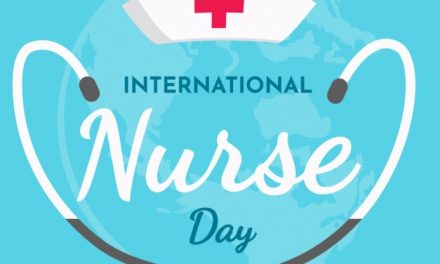