The wall calendar for the year 2015 published by the city based University of Hyderabad (UoH) has been awarded the 1st prize at the first Public Relations Society of India (PRSI), Telangana Chapters conference titled “Bangaru Telangana: Public Relations Communication Perspective” on Sunday, 21st February 2016 at the Best Western Ashok Hotel in Lakdikapul, Hyderabad. This award was part of the National Public Relations Awards announced by the PRSI.

The award was received by the Public Relations Officer of UoH, Mr. Ashish Jacob Thomas from Shri T Harish Rao, Minister for Irrigation & Legislative Affairs, Govt. of Telangana in the presence of Shri K. V. Ramana Chary, adviser to the Telangana Government on culture, tourism, endowment, youth and media related issues and Shri R. Vidyasagar, adviser to the Telangana Government on irrigation.

Out of the various entries that were received, the wall calendar of UoH which has some stunning visuals of the wild life of the campus bagged the first prize. The theme was suggested by Prof. Ramakrishna Ramaswamy, the then Vice-Chancellor.

“The visuals in the 2015 calendar have been shot by the students and faculty of the University and submitted as entries for the contest announced by the University. Many entries were received for the contest and it was a tough task for the jury members to make final choices. Each picture was among the best and it showed the enthusiasm of the university fraternity in showcasing the wild life on the campus. The calendar also received wonderful reviews and appreciation from within and outside the University when it was published” says Ashish Thomas.

“This award is dedicated to the wonderful & enthusiastic students, staff and faculty of my University. My office is humbled by this honour for our publication and we will continue to be inspired by our University fraternity do our best’, he added. 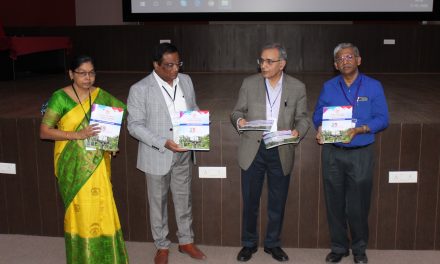