The curtains have closed on Vigyanotsav, the annual science fest conducted by the Junior Science Club of CIS, University of Hyderabad held on 2nd and 9th February 2019. The event was filled with excitement and awe on both the days and it continued to build on the excitement seen on day one. The second day started off with an experiment session covering the fields of physics, chemistry, mathematics, biology and computer sciences.

In the Physics lab, the concept of angular momentum was explained using simple examples like cycle tyres and spinning tops to help the students understand its importance in wide range of applications ranging from navigation of rockets to gyroscope sensors of mobiles. The behaviour of light as it moves through different lenses was shown using lasers. The most interesting experiment in the physics lab was a gravity-defying double cone. Other experiments shown were non-newtonian fluids with its applications in bulletproof jackets and some exciting Lissajous figures.
The topic for the biology lab was antibiotic resistance. The students were engaged in a discussion about how antibiotics work, how bacteria are growing resistant to their action, and the steps we can take to prevent antibiotic resistance. They were shown cultures of soil-bacteria that were resistant to different antibiotics, and a video on how antibiotic resistance works.

The Chemistry lab was comprised of exciting experiments like magnetic levitation using a super conductor in liquid nitrogen, elephant’s toothpaste and many colourful reactions that sparked a lot of excitement in the young minds. Their fascination and eagerness to understand the experiments motivated the organizers to explain the chemistry beyond high school level.

The Maths lab taught students the technique of making a mobius strip followed by a discussion about few amazing properties of it. Along with this, the young minds were shown how a coffee cup is the same as a donut in a topological sense.

The Computer Science lab introduced the students to the infinite possibilities of Information Technology and Computer Science which can be tapped by coding. It started out with the concepts of logic and algorithms. After establishing the basic idea, the organizers went on to explain the modern day technology of Face-Recognition.

After the two and a half hour long and informative experiment session, the students continued to display their inquisitive behavior during the lunch hour bombarding the organizers with all sorts of questions about the demonstrations.
Post lunch, Professor Jayshree Ramadas (Professor, TIFR Hyderabad) took the students on a journey of science that they see around everyday, with the theme being “There is more to everything around us than we see with our naked eye.” It gave a new outlook to the students about science and research.
The finals of the quiz following the distinguished lecture, was full of nerve-wracking and intellect stimulating questions. The students were really thinking out of the box and there were all of sorts of answers and explanations to the questions asked by the organizers.
The day was concluded with the prize distribution ceremony, chaired by Prof. Sanjay Subodh (Director, College of Integrated Studies) and Prof. S Srinath (Faculty Coordinator, Junior Science Club).
Vigyanotsav, like every other year was a huge success. Despite being an event meant for school children, it was immensely enjoyed and appreciated by the teachers who also attended the event.“This is the best bunch of college students that I have seen in my life.”, were the words of a GGHS Hussaini Alam faculty and “Thank you so much for giving us the opportunity of witnessing what scientists and researchers actually do and what a premier institute like University of Hyderabad is all about”, said another.

We thank the authorities who made an event like Vigyanotsav possible and all the student organizers who worked day and night to make it a success. 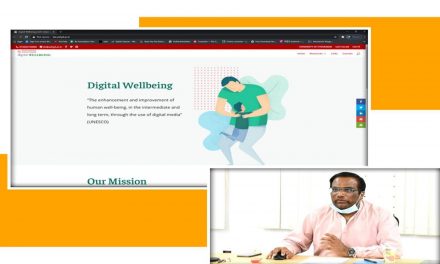