“We have been making outstanding contributions in science since long. A look at the green revolution, white revolution and blue revolution that created self-sufficiency in staple crops, dairy products and marine products was because of our scientific interventions and we have not relied on anyone”, said Prof. Appa Rao Podile, Vice Chancellor, University of Hyderabad while addressing the curtain raiser for the 6th India International Science Festival (IISF)-2020 as Chief Guest.

Prof. Appa Rao stressed the need to promote basic science, right from the starting levels. Schools are the first places for seeds to be sown to develop an interest in science among young students. Prof Appa Rao said, we have been making outstanding contributions in science since long. A look at the green revolution, white revolution and blue revolution that created self-sufficiency in staple crops, dairy products and marine products was because of our scientific interventions and we have not relied on any one.  Artificial Intelligence, data science and its applications, robotic automations, virtual reality are developed at our premier institutions. Combating the current pandemic was a collective effort of various institutes in the country and in less than 10 months we are now confident to deal with the virus, including development of new anti-viral drugs and  possible vaccines. Such an effort is difficult to envisage in most countries across the globe. Nano medicine, synthetic genome cells, synthesis of natural products and much more work in various institutes in the country is paving a way for self-reliant India. 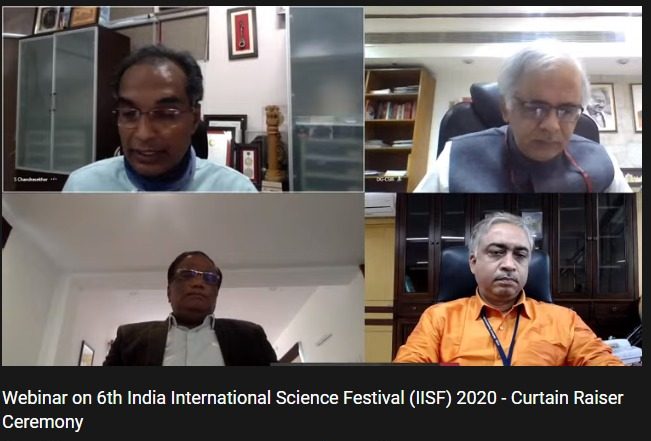 The 6th India International Science Festival (IISF) that aims to promote scientific temper among students and the public and catalyse a relationship between Science and Society for development of new frontiers of growth will be held during December 22-25, 2020. In a prelude to the main event, CSIR-Indian Institute of Chemical Technology organised a curtain raiser event on December 1, 2020, to highlight the importance of the festival and create awareness among the public and students on the importance of science and technology in development of the nation.

Dr Shekhar C Mande, DG CSIR, delivered the presidential address for the event that was hosted on virtual platforms. Dr. Mande said people are interested to learn about the progress done at various science-based institutions. In this regard, he said the IISF that was held in Lucknow in 2018 recorded a footfall of 8 lakhs. This demonstrates that the public is curious to know the work being carried out in research laboratories and therefore it is our duty to showcase the research work to the common people. Citing the example of the discovery of zero, he said that our achievements are phenomenal. Major scientific bodies like the Department of Science and Technology, Department of Biotechnology, Department of Scientific and Industrial Research, Department of Earth Sciences, Indian Council of Medical Research along with Vijnana Bharati have already organized this event in the last five years with great success. Because of the pandemic, this year it was decided to organize it virtually. For the second time, after 2016, CSIR was given the prime responsibility to organize the event. He requested all present in the curtain raiser event to propagate and promote this event.

Dr S Chandrasekhar, Director CSIR-IICT, in his welcome address, urged everyone to follow guidelines for control of the pandemic such as wearing masks and avoiding public gatherings. As a part of the event, IICT is working towards the vision of achieving various Guinness Records during the event. He said in a major step towards self-reliant India, that labs may commence working with universities. He urged students to participate in the virtual event, and after restrictions for control of pandemic are completely relaxed, they can visit the research facilities physically.

The IISF launched in 2015 is a celebration to promote Science and Technology and demonstrate how science can transform India into a developed nation within a short span of time.

with inputs from IICT