Why Theatre matters to me: Sanjna Kapoor

She represents the coming together of two vibrant theatre traditions: Indian and Shakespearean. With a legacy of cinema and stage, it seems only natural that Sanjna Kapoor has made her life in theatre. Speaking at the Third Bimal Roy Memorial Lecture, organized by The Sarojini Naidu School of Arts and Communication and the Bimal Roy family, Sanjna Kapoor, traced the history of the iconic Prithvi Theatre at Mumbai and her own journey as a theatre activist.

“I am in the world of theatre like many people because… I have to. It is the very essence of our lives that provokes us to dream the unthinkable and often realize these dreams.” She walked the audience through her own induction, inspirations and work in Theatre. “For me it all begins with this gentleman, Geoffrey Kendal, my maternal–British– grandfather. His passion and professional involvement in theatre made him travel all the way from England to India. The stories of his theatre company’s travel and adventure inspired me to join the world of theatre.”

She describes how then her mother’s family became engaged with the Prithvi Theatre Company, run by her Indian grandfather, Prithviraj Kapoor. After the demise of Prithviraj Kapoor her parents Jennifer and Shashi Kapoor started the Prithvi Theatre, struggling to make a go of it for the first five years. Gradually people started experiencing Prithvi Theatre as a regular venue for good theatre performances. “Prithvi Theatre started as a small place but captured everybody’s imagination because of the freshness of the architecture and a wide variety of theatre performances by various groups from all over the country and abroad,” says Sanjna. “Audience engagement with the Art is equally important and this was also imbibed during the growth stage of Prithvi Theatre,” she added. “Management of the arts is what makes things come alive, makes possibilities blossom… this has been the prime motivation for my continued association with the theatre,” she continues.

Sanjna emphasizes the need to keep our memories alive through theatre and other cultural engagements. “But it sad that not a single auditorium is dedicated for Theatre, Dance, Music or Puppetry even in Delhi,” says Sanjna. She also took note of the new developments in India with reference to theatre arts like Adishakti’s Laboratory and Performing Space in Pondicherry, the Seagull Theatre’s Performance and Workshop Space in Guwahati and the Jana Natya Manch in Delhi, which have emerged as new examples for spreading theatre in the country. She mentions that recent communication technology has helped them engage with people around the country and the world.

Sanjna headed Prithvi Threatre from 1990 till 2011. In her time there, she had regularly created mesmerising events, challenged Theatre groups with festivals demanding new works, toured festivals, presented theatre at other Mumbai venues and introduced an Arts Outreach programme for children during summer. She also expanded Prithvi Theatre into a broader cultural hub by bringing other disciplines (poetry, science, documentaries and short films, etc.) into the activity canvas, and running an art gallery to present young and established artists. Most recently she initiated the India Theatre Forum, an all India network of theatre practitioners. Now she is engaged with Junoon, a theatre company co-founded by her that aims to make theatre accessible to the audience across the country. Mumbai Local – A Community Arts initiative facilitates people experience the theatre in their neighborhood and get engaged with the programme management in various ways. “There should be more community space for cultural interactions that the performers and audience can access easily at affordable costs”, says Sanjna.

The members of the Bimal Roy family were present along with many guests form the twin cities and the UoH community. Usha Raman, Head of Communication Department, S N School, UoH welcomed the audience and Nikhilesh Sinha, grandson of Bimal Roy introduced Sanjna Kapoor. Aparajita Sinha, daughter of Bimal Roy proposed the vote of thanks.

Tuning Magnetic Anisotropy in Nanostructures for Biomedical and Electromagnetic Applications 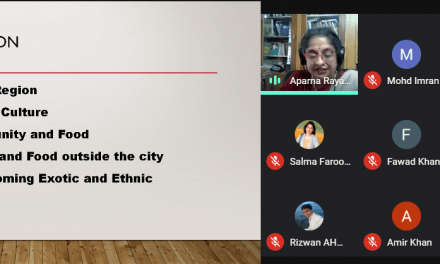