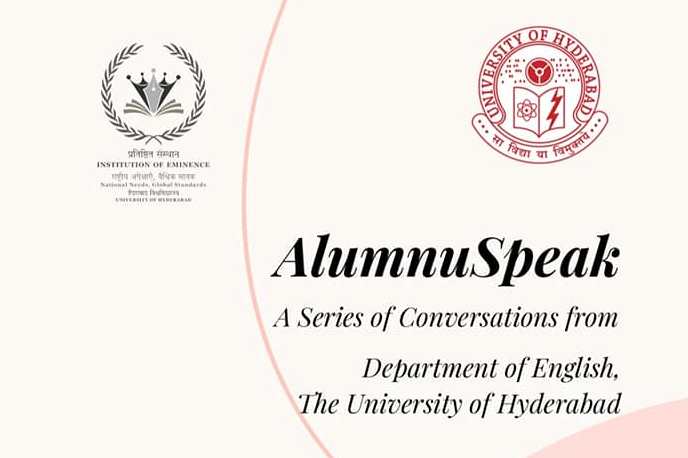 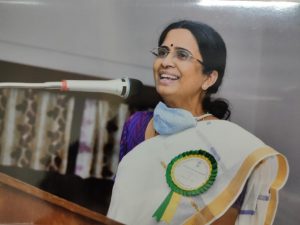 Looking back on her years at the department, Prof. Harishankar credited the professional as well as personal relationships she formed at the university. On this occasion, she fondly remembered her eventful journey as a research scholar, which involved interactions with prominent scholars across the world, and in UoH, such as Prof Ramachandra Gandhi (then in Philosophy) and Tomy (then a Ph.D. student and currently Head of Philosophy in UoH). Prof. Harishankar focused on the trajectory of her career as an academic and emphasized the importance of being open to change while balancing the breadth and depth of knowledge. These ideas were richly illustrated by examples from her own research projects, like those on the Devadasis and on Open Educational Resources. She also described how she set up GLIDE, the Gender Lab, in the University of Madras. Prof. Harishankar interacted with the audience and answered questions on her work as well as on humanities research in general.

In the audience were faculty members from English as well as other Departments, research scholars, students, and alumni. Prof Harishankar emphasized that in any research project, building rigorous and clear conceptual and theoretical frameworks was crucial. She insisted that, while interdisciplinary work gets a lot of funding and attention now because it is trendy, researchers should first strengthen their disciplinary frameworks and methodology before diversifying.

The event concluded with a vote of thanks by the coordinators, Prof. Nayar and Prof. Kurian, who noted that the idea for AlumnuSpeak was first proposed by Dr. Sireesha Telugu. The Department plans to organize more such events under AlumnuSpeak during this semester.