Dr. B.R. Ambedkar 125th anniversary celebrations committee organized a talk by Professor Basant Kumar Mallick on ‘Ambedkar as a builder of modern India’ on 24th April, 2017 at the C V Raman Auditorium at the University of Hyderabad (UoH). Prof. Mallick is the Head of the Department of History at Utkal University.

Prof. Mallick throughout his lecture emphasised Dr. Ambedkar’s instrumental role in building India into a modern sovereign state. He hailed Ambedkar as the emancipator of enslaved people, especially the Dalits and other backward classes. He elaborated Ambedkar’s notions on Universalisation of education, the right to drinking water and Indianisation of Civil services. He clarified how Ambedkar was not a stooge of British but rather someone who was recognized by them for his immense merit.

Quoting Ambedkar’s words, Prof. Mallick said, “Democracy in India is a talk addressing the Indian soil, without any political, social and economic democracy.” He emphasised Ambedkar’s crucial role in framing the constitution and introducing labour reforms, social security and insurance schemes for industrialists. “Ambedkar demanded for Dalit representatives in every constituency and opposed the idea of welfare state through reservations. The current reservation system was the agreement between Gandhi and Ambedkar. Because of reservation, Dalit leaders have become weak and are dependent on the general category leaders for the upliftment of the backward classes,” Mallick opined.

Mallick called Ambedkar a visionary who envisioned water as a capital that should not be misused. The multipurpose river valley projects are hence a result of this, he said.

Shedding light on his agitation for the rights of women, Mallick explained how the movement was not supported in the Parliament. He also talked about Ambedkar’s association with Buddhism, which he considered was a scientific doctrine, a way of life rather than a religion. The lecture was followed by an interactive session between the speaker and the students.

By Priyanka Richi, Department of Communication

The Lineage – Melodious presentation of the Maihar Gharana 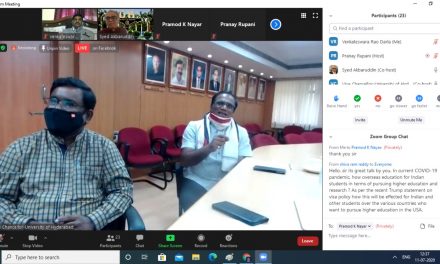