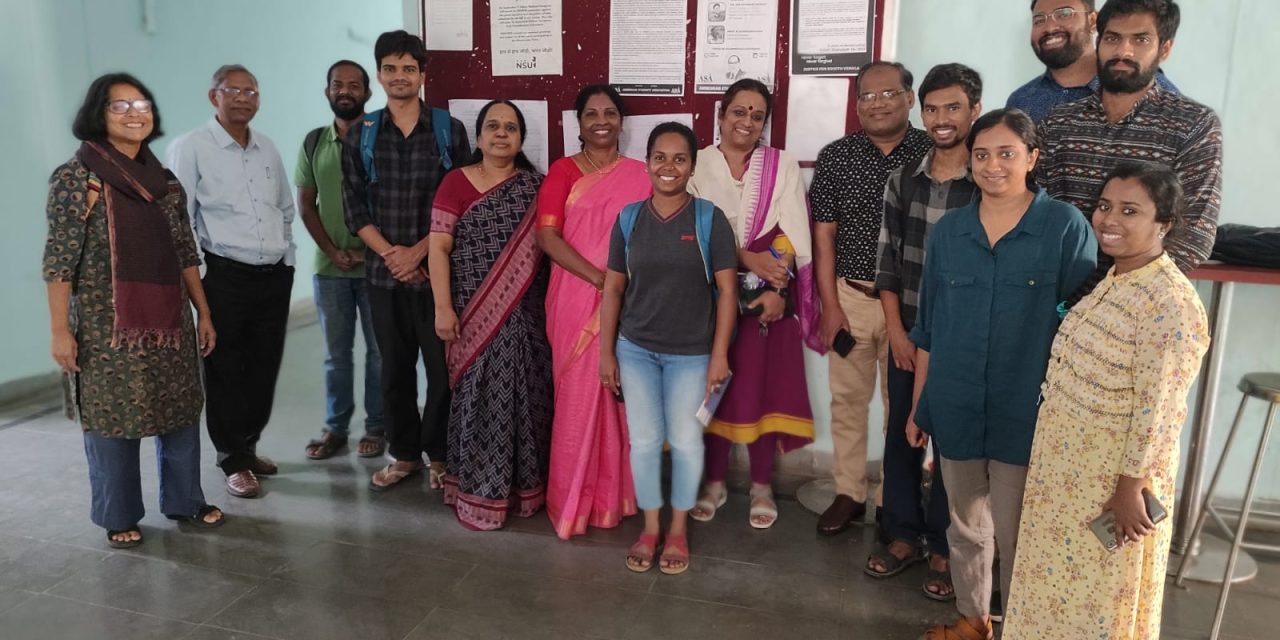 On January 3rd 2023, the Centre for Women’s Studies, University of Hyderabad hosted the 7th Annual Savitribai Phule Memorial Lecture to commemorate the birth centenary of Krantijyoti Savitribai Phule by celebrating it as the Teachers Day. Recognised as the first woman teacher in India, Savitribai Phule’s contribution towards the education of girl children continues to show the way forward to women’s movements. In remembrance of her legacy, the Centre invited the eminent Dalit feminist activist and former IAS Officer, Dr. P. Sivakami to deliver the lecture titled “Women Changing India: Savitribai Phule”. Prof. Challapalli Swarooparani, Acharya Nagarjuna University, was invited to chair the session.

The programme started with Prof. K. Suneetha Rani’s opening address, retracing the history of the Annual Savitribai Phule Memorial Lecture and reiterating the relevance of Savitribai Phule’s perception of education as emancipation to the present times. After a year and a half of pandemic, the lecture was held in a hybrid mode, with the audience joining both in person and through google meet. The Chair, Prof. Swarooparani introduced the speaker and her journey as an Indian administrator, a politician, and a feminist writer. Dr. P. Sivakami’s life, a true inspiration to many young feminists, seemed most appropriate with the title of the lecture and reaffirmed the celebratory history of Savitribai Phule.

Dr. Sivakami’s lecture reiterated the vision and struggles of Savitribai Phule for the emancipation of women and the marginalised people. She began her lecture reciting Savitribai’s poem “Arise, Awaken, to Get Education” and went on to narrate the struggles of Savitribai in starting and running the school, the humiliation she had to endure for her feminist visions and endeavours. Her revolutionary attitude towards her contemporary times, and her preparedness to confront social challenges and caste misogyny were highlighted by the speaker. Dr. P. Sivakami also reminded the audience of Savitribai’s struggle to establish rehabilitation for widows and unwed mothers. She politicised Savitribai’s choice to prioritise women’s education and the ripple effect it has had on the society at large. In her conclusion, Dr. P. Sivakami, argued for a nuanced understanding of marriage, setting the example of Savitribai and Jyotirao Phule’s partnership. She gave instances of radical equality that they had envisaged and practised, and the social commitment they had undertaken together.

The lecture elicited insightful questions from the audience about Savitribai Phule, and about the status of women in current times. Faculty and Students from various departments joined the session enriching it with their thoughtful comments and questions. The programme was concluded with a formal vote of thanks by Prajwal Gaikwad, a second year Doctoral fellow at the Centre.