Prof. Ravindranath in his lecture gave reasons as to why we all need to worry about Climate Change? He said that Ocean Warming dominates the increase in energy stored in the climate system, accounting for more than 90% of the energy accumulated between 1971 and 2010. Over the period 1901–2010, global mean sea level rose by 0.19. The Arctic summer sea ice extent in 2012, (measured in September) was a record low, compared to the median summer sea ice extent for 1979 to 2000. In 2013, Arctic summer sea ice extent rebounded somewhat, but was still the sixth smallest extent on record, he added.

Prof. Ravindranath explained that some of the other observed impacts of Climate Change are increased Flood risk linked to global warming, strong evidence linking specific weather  events or an increase in their numbers to the human influence on climate, Higher temperatures are reducing the crop harvests globally, Current sea ice loss in Arctic Unprecedented in 1450 years and 2010 witnessed the record Greenland melting, which proves that global warming and climate change can have dangerous consequences for the World.

Citing example of the Chad Lake in Africa, Prof. Ravindranath said that impact of Climate Change has resulted in massive migration of human beings and animals. The Lake is now 1/20th of the size it was 35 years ago. He stated that long-time monitoring of ecosystem is essential to save our rivers and forests so that people do not suffer. At the current rate of Global Warming and Climate Change, only 1/3rd of the natural resources will be available for consumption. Further he recalled that personalities like Mr. John Kerry and Mr. David Cameron have said that Climate Change is a dangerous threat to the human race equating it to terrorism, poverty and weapons of mass destruction. These changes and global warming are also creating extreme weather patterns and hence the need of the hour is to create more awareness around the world on the dangerous consequences of climate change on the Ecosystem and the survival of the human race, said Prof. Ravindranath.

The Vice-Chancellor, Prof. Ramakrishna Ramaswamy gave the welcome. Dr. V. Chakravarthi, Head, Centre for Earth and Space Sciences introduced the speaker. Prof. E Haribabu, Pro Vice-Chancellor spoke on the occasion and thanked the speaker for his enlightening lecture on a topic of global concern. 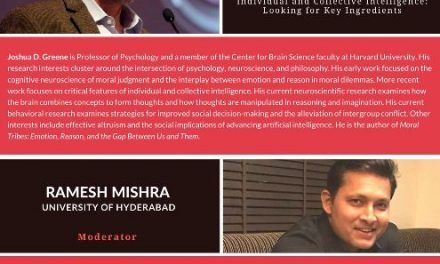