Mr. Danish is a person of Indian origin and living in Toronto, Canada for last 30 years. He belongs to the city of joy i.e Kolkata but his ancestral origin is Lucknow. He has been a student of the Aligarh Muslim University. After his studies for a short time he associated with the All India Radio, Delhi and Calcutta. Later he moved to Canada and this became the turning point in his life. The migration after migration, internal and external, in his life gave him a different experience which he later penned in his drama collection Hijrat Ke tamashey (the odds of migration).

Daastan Hijraton Ki is a confluence of the old art of storytelling and the monologue of drama. It is a fine blend of the old and the new art.

A. Daastangoi is comprised of two words of Persian – Daastan meaning story and Goi meaning telling. Daastangoi is a 16th century Urdu storytelling art form. One of the earliest references in the print to Daastangoi is a 19th century text containing 46 volumes of the Adventures of Ameer e Hamza titled “Daastan e Ameer Hamza”. It reached its zenith in the Indian subcontinent in the 19th century and is said to have ceased with the demise of Meer Baquer Ali in 1928. Urdu critic Mr. Shamsur Rahman Farooqui has played significant role in its revival in the 21st century. The main attraction of Daastangoi is the voice of the Daastango or the storyteller whose voice is his main artistic in recreating the Daastan or the story

A. Basically I am a playwright with twelve books to my credit and my main theme is the problem and pleasures of migration. I took the liberty of recreating Daastan with the contemporary issues of migration.

Traditionally Daastan is pure fantasy. I adopted the traditional form and costume of Daastan but my tales are the present day issues of immigrants living in the west. Moreover I took the liberty of playing my theatrical crafts and tried to convert the Daastan into the Solo Drama. For regional interests my tales are not just narration of a single character but simultaneously five different characters of day to day life with five dictions and dialects known as Boli-Tholi. It is a sad tale which ensures that there is light of hope at the other end of the tunnel.

Q 3: For how many years you are doing this?

A. My theatrical background is almost thirty years but Dastangoi is my new found love which I started a couple of years back and have travelled around the world for the performance.

Q 4: What is the reaction of audience worldwide?

A. My first performance was in Canada and then major cities of middle-east where the audience got connected right away as they can relate their stories in my presentation. The reaction during the presentation was laughter, tears and standing ovation.

Q 5: What is the future of Daastangoi, as per your experience?

A. It is a celebrated and lost art form but revived successfully in the present days and I think it will survive the test of time with its new tales and experiments. As a theatre person I strongly believe that in this age of chaos and confusion, theatre in any form like Solo, Street Theatre, Full Length Plays and Daastangoi is a great source of comfort and healing.

Q 6: Your opinion about Hyderabad and the University of Hyderabad.

A. I have visited the city of Hyderabad previously also and this seat of Culture & Literature inspires me with its traditional values, culinary delights and cultural heritage. It was a pleasant surprise in my Daastangoi performance in the University of Hyderabad organized by its Department of Urdu, School of Humanities that the Auditorium was jam-packed with multilingual students equally enjoying and clapping on Urdu couplets and narration. The best part was after the performance when the students from various departments and disciplines started asking questions about Daastangoi and my performance. Lately I am on a tour of India and have presented at least in fifteen cities but Hyderabad was my best destination.

The Dean of the School of Humanities Prof. Panchanan Mohanty not only sat for the whole programme and enjoyed thoroughly the Daastangoi but endorsed a wonderful suggestion to the students that in the present age we must be multilingual which makes us true Indian. I am flattered and humbled as this multilingual reference was towards my tale of various ethnic immigrants of my Daastangoi. 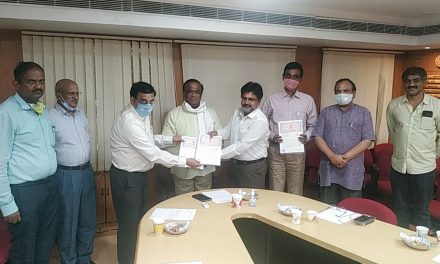