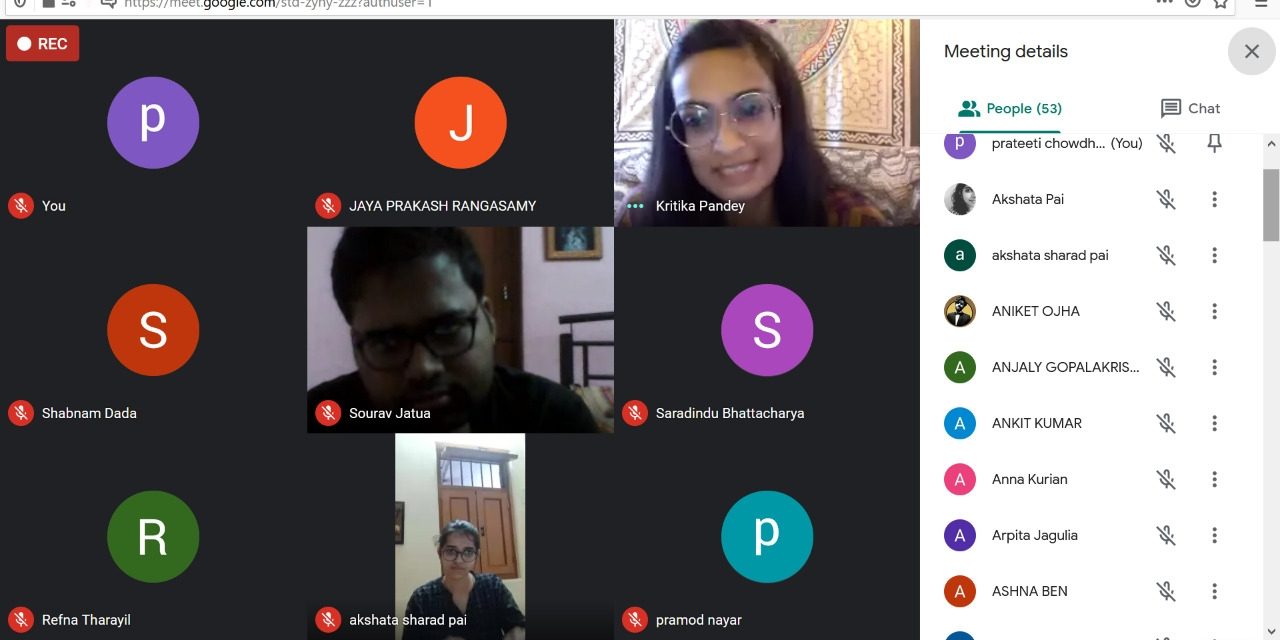 The inaugural session of Bricolage II, an online lecture and conversation series organized by the research scholars of the Department of English, University of Hyderabad has been held on 15th January, 2021. The department hosted Kritika Pandey, a Pushcart-nominated author, the winner of Commonwealth Short Story Prize, 2020 and an MFA graduate from the University of Massachusetts, Amherst.

The session began with a reading of her Commonwealth Prize winning short story “The Great Indian Tee and Snakes”, a story that Pandey herself described as being about “mourning, falling in love, the inability to move on and out of love, and human connection”, while depicting grave themes like communal hatred and mob-lynching in ordinary Indian lives. An engrossing Q/A session followed. Pandey discussed with the audience her personal reaction to communal violence and mob-lynching in close geographical proximity to her hometown, and the rise of conservative governance in India and the United States. She stated the need for “writing bravely”, citing authors like Mahasweta Devi, Arundhati Roy and Kamala Das as inspirations.

Pandey then engaged the audience in discussions about depicting everyday trauma with subtlety and the propensity of humans to brush important issues under the carpet. She talked about the universality of terror, the ostracism people have to face due to differing cultural markers like food choices, and the hope for humanity engaging in collective lessons on how to be human.

Turning to the topic of the craft of storytelling, she talked about the importance of restraint in writing, the fallibility of third-person omniscient narration, her thoughts while creating characters and dialogue, and the importance of acknowledging the author’s identity and subjectivity even in so-called apolitical genres. In response to a question on the transgressive political possibilities of little gestures and intimacies, she recognised the limitations of overt identity politics and emphasized that ordinary people do operate as significant political actors in the course of their everyday lives. In this context, she spoke of her own storytelling as an attempt to undo the representation of trauma through hard, statistical data, and cited Sadat Hasan Manto’s depiction of the human impact of the Partition as a strong influence.

The session ended on her note on Literature’s ability to “find the vocabulary for things that are unpalatable” and the storyteller’s vocation as “using the opportunity to say something that is difficult to say”.