In memory of Dr. C V S Sarma, one of the founding members of the department, the Department of Communication, Sarojini Naidu School of Arts & Communication organised the 9th ‘Dr. C.V.S. Sarma Memorial Lecture’ on Friday. C V S Sarma was known for his innovative approaches to teaching, visual aspects of communication and script writing.

Dinesh C Sharma is an award winning journalist and author with over 30 years of experience in reporting on science, technology, innovation, medicine and environment related issues for national and international media outlets. He was also a student of C V S Sarma at Osmania University. Currently, he writes for columns on Mail Today, Indiatoday, Rediff.com, DNA and Metro India. In addition, he writes for The Lancet group of journals and other international publications. He is also a contributing author for the Ecological Society of America. His latest book, “The Outsourcer: the story of India’s IT Revolution”, MIT Press, 2015, won him the Computer History Museum Book Prize, 2016.

In his lecture, he discussed about historical perspective of science communication and science popularization in India by exploring the roots of societies such as “Indian Association for the Cultivation of Science”, which primarily functioned as a science communication body until Dr. C V Raman joined it in 1904. “In the early days of science societies, people use to pay one to two Aanas to attend science lectures, but nowadays, though even for a free lecture, it is hard to find people”, said Sharma.

He also illustrated, the idea of connecting science with national development, referring to the work of Meghnad Saha and his relationship with Subhash Chandra Bose and Jawaharlal Nehru which setup many important science institutions in India. He added “The general assumption is Indian exploration into science was a legacy of the British but Homi J Bhabha convinced Pandit Nehru to write to the Canadian Atomic Energy Commission to ask for Uranium for building an atomic reactor saying that India will be independent soon. In fact, the first batch of enriched Uranium was delivered a month before India got independence from British Rule.” The idea of India’s nuclear programme was first conceived and began in the 1940s.

-By Kartheek Kumar, Department of Communication 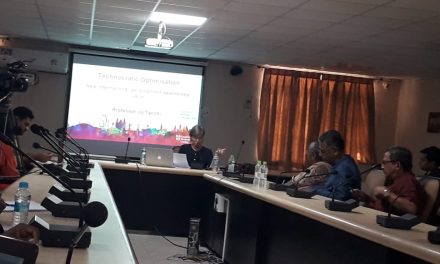