Showcasing the richness and diversity of India’s classical music and dance traditions, the SPIC MACAY University of Hyderabad (UoH) sub-chapter successfully hosted YAMINI 2017, the overnight concert series on the eve of Indian Independence Day. YAMINI has been an annual event over the last 7 years at UoH. Following the exciting Qawwali night which was a curtain raiser event held last week on August 7, 2017 at the Savitribai Phule Auditorium which attracted a large number of young art lovers from the University and in & around Hyderabad to experience a magical evening celebrating Indian culture.

The concert series was initiated with the ceremonial lamp lighting by the Chief Guests, senior volunteers of SPICMACAY – Telegana Chapter and UoH sub-chapter and, Padmashri Guru Ghanakanta Bora, leading exponent of Sattriya dance followed by an inaugural speech by the Chief Guests. Extending his support to the movement of SPICMACAY, Prof. Appa Rao congratulated and encouraged the student volunteers in the university to participate in activities promoting Indian art forms. He also announced that the university will soon be starting a ‘Department of Music’ in the SN School of Arts and Communications. Shri Papa Rao, who was familiar with the SPIC MACAY community, called for all the young volunteers from UoH to expand the Hyderabad chapter and work towards promoting the rich culture of Telangana. He also advised the volunteer group to organise more ‘lecture demonstration workshops’ in the university to create awareness about various new art forms and draw more people to be a part of this movement.

The cultural evening kicked off with the Sattriya classical dance of Assam led by Guru Ghanakanta Bora. Beginning with the traditional rhythmic vandana by Guruji, the dancers presented a thematic performance which gave a glimpse into the heroic deeds of Lord Krishna. The troupe consisted of young dancers Dr. Anwesha Mahanta, Sanghamitra Bora accompanied by the excellent orchestra including violin, flute and Khol exponents. The young dancers enacted vignettes of Krishna-Radha’s love story. Their rich expressions and subtle movements held the audience mesmerized. The concluding piece by Anwesha, which told the story of Krishna and his friend Sudama, was magnificent and well appreciated.

Following the magic of Sattriya, Carnatic Vocalist Shri Sakethraman took over the stage. Accompanied by very talented mridangam, violin and ghatam artists, his rendition of the evergreen Thyagaraja keertanas was marvellous and ecstatic. Towards midnight, he sang in praise of Lord Krishna celebrating Janamashtami. The energetic and harmonically-rich Thillana was a treat to classical music lovers and was a joyous presentation. Shri Sakethraman concluded his concert with the national song, which sounded extremely beautiful in his sweet and bold voice, welcoming the Independence Day.

The musical night continued with a Shehnai concert by the duo-Mr. Sanjeev Shankar and Mr. Ashwani Shankar along with their troupe of young artists. They started with an aalap followed by raag Maru Vihag. Their soulful music nuanced the audience and radiated bliss and peace towards late midnight. They ended their performance on a patriotic note playing ‘Raghupati Raghava Raja Ram’ and ‘Vaishnava Janto’.

Mr. Wasem Ahmad Khan’s Hindustani vocal concert began during late hours past midnight. Starting with raag chandrakauns, he sang two badis in raag Sohni much to the delight of the young connoisseurs. His deep yet soft voice was soothing. He stunned the audience with his skillful notes and grand performance.

Hours before dawn was the finale veena concert by Smt. Punya Srinivas. Beginning with an energetic prayer song on a fast tempo, Punya Srinivas instilled energy and excitement in the tired audience. Accompanied by senior mridangam and ghatam artists, she flawlessly played popular classical keertanams on her veena. Her central piece, ‘Samajavaragamana’ which was percussion-soaked and enthralling was followed by a mythical piece highlighting the piercing yet soothing strings of her veena manipulated in a skillful and effortless manner. In celebration of Janmashtami she presented an emotionally-rich ‘Enna Thavam Seydane’ in praise of Lord Krishna. Her seductive music was thoroughly enjoyed by the audience who longed for more. The event was concluded with a melodious ‘Vande Mataram’ played by Smt. Punya Srinivas on the Veena which gave goosebumps to everybody.

The logistics of the entire event was managed by student volunteers of UoH assisted by senior volunteers of the SPIC MACAY Telangana subchapter and the Cultural Coordinator of University, Dr. Zahidul Haque.

YAMINI 2017 was a night of enchantment with art lovers enjoying over 9 hours of music and dance from dusk to dawn. UoH and citizens of Hyderabad were extremely lucky to have experienced the best of the art forms presented by national award winning artists. All the artists were felicitated by the SPIC MACAY for their selfless service towards the movement of promoting Indian arts. The audience left in anticipation of more such exciting events through the year until YAMINI 2018. 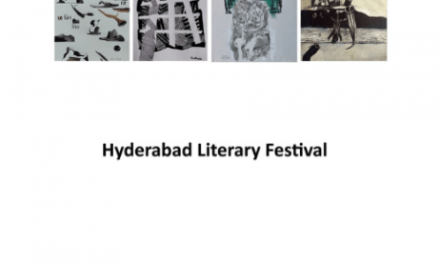