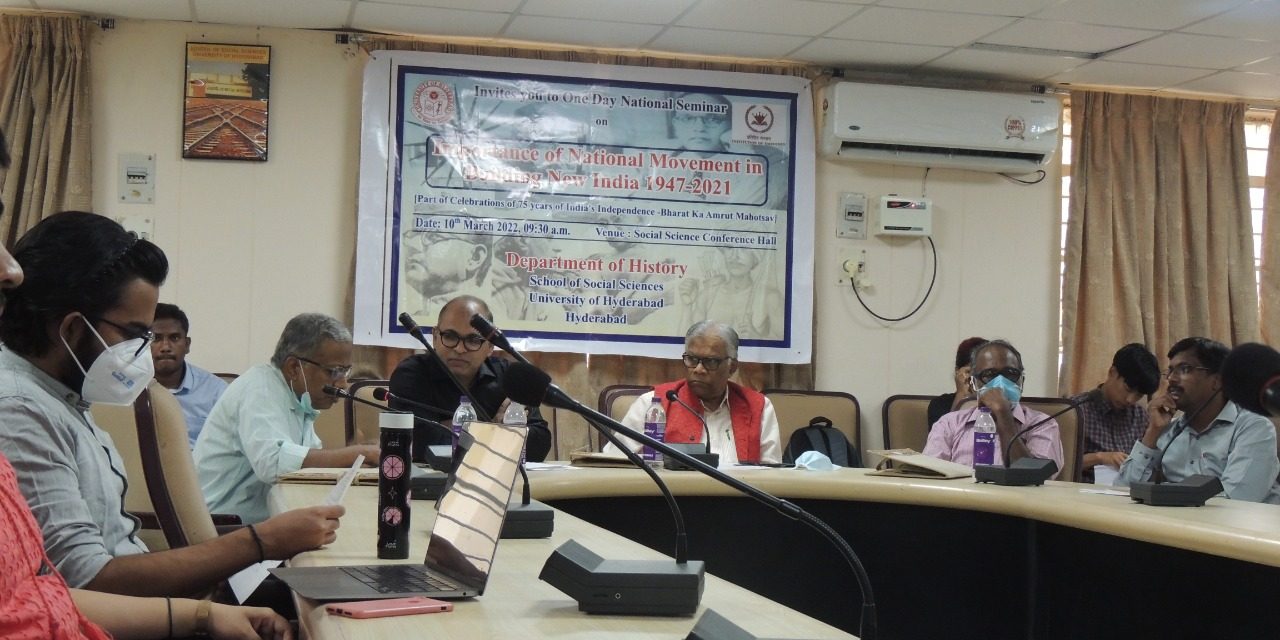 In the inaugural session of the one-day national seminar, “Importance of National Movement in Building New India 1947-2021”, conducted by the Department of History, Prof. Bhangya Bhukya, HoD, Department of History at University of Hyderabad (UoH) gave the welcome address and Dr. B. Eswara Rao made the introductory remarks. It was held under the initiative of Azzadi Ka Amrit Mahotsav to mark 75 years of Independence of India.

The Guests of honour for the seminar were Prof. Arun Kumar Patnaik, The Dean, School of Social Sciences and Prof. B.J. Rao, The Vice Chancellor, UoH.  Prof. Patnaik remarked on the importance of dialogue for nation building and then went on to highlight the progress of the school especially in terms of publications.

Prof. B.J Rao stressed on the importance of capturing originality in our ideas and of not taking anything at face value but analyse, question and understand it.

The keynote address was given by Prof. G. Aloysius. Prof. Aloysius highlighted the need for incorporation of experiences of every citizen of the country as a nation. Nation according to him was the citizen’s experiences, freedom, equality and fraternity. He then dissected into the dominant reading of nationalist historiography of the nationalist movement and questioned the actual awakening of the national consciousness. The beginning of the national consciousness among the dominant nationalists for him was when the British took away their earlier exclusive benefits and rights and gave it to the rest of the people. Prof. Aloysius also briefly discussed about the triangular fight between the British, the nationalists and the local people.

The first talk was given by Prof. Sajal Nag, Assam University, Silchar on The Invisible of Mahatma: Gandhi and North East India. Prof Sajal talked about the impact of Gandhi’s name as a source of inspiration in various local movements in North- East India. He mentioned that despite the unawareness of Gandhi’s political ideology people believed in the name of Gandhi for their movements. Even before Gandhi became a household name in India, his name was already popular in remote tea gardens of Assam that the people already looked at him as the deliverer and protector. Prof. Sajal also briefly spoke about Gandhi’s positive impact on Rani Gaidinliu’s Heraka movement against the colonial rule in Manipur and the Nagas’ movement for self-rule.

Next, Prof. Jangkhomang Guite, Manipur University, Imphal, spoke on Undertstanding Freedom Movement in the Hills of North East India During Colonial Period. Prof. Guite mentioned how everyday form of resistance in the absence of a major platform became the norm to exhibit their grievances against the colonial domination. He remarked that the nature of colonial regime in North East India was more than legal authoritarianism and wrongly called ‘indirect rule’ mentioning how punitive measures of the colonial government led to huge scale violence thus urging for self-rule among the people.

Next, Prof. Bhangya Bhukya, University of Hyderabad, spoke on What is Nation and Nationalism to Adivasis?. He questioned whether we can call all the anti-colonial movement as national movement. He also questioned the idea of nation and nationalism for the adivasis. According to him, different communities experienced different type of colonialism and therefore we cannot put their experiences in one basket. For Adivasis, autonomy and self-rule is nationalism. There has always been a strong sense of self rule and autonomy among the Adivasis and for them, it is not the freedom that we talk in larger sense but their life and their free movement in the forest that can be called nationalism and they’re still fighting.

The first speaker of the session was Prof. Sanal Mohan, MG University, spoke on ‘Everyday life and engaging with the idea of freedom’. He talks about how different people understood the idea of freedom and how they imagined it. He talks about what freedom meant to the oppressed class and how it became a problem for them, who have been suffering under the dominant class, much before it became a problem of the elites. His talk was based on the society in Kerala and he examined the parallels of it from the rest of world. He pointed out how freedom intertwined with the idea of justice and equality. He says that idea of freedom needs to be problematised by analysing the everyday life of people.

The second speaker of the session, Prof. Y Chinna Rao, CSSEIP, JNU spoke on ‘Emergence the social Exclusion studies: History and Politics in post-colonial India’. He says that though the emergence of social exclusion studies in a new phenomenon, it was preceded by long and simultaneous history which can be trace to the cultural politics that originated in Maharashtra having and all India influence. He highlights the important landmarks in tracing the emergence and shaping of the exclusive studies, which are connected to the larger social and political issues of the justice, development and freedom.

The last speaker of the session Dr. Nishikant Kolge, CSDS, New Delhi spoke on ‘Ambedkar as Nationalist icon Vs. Ambedkar’s Nationalism’. He talks about how the idea of nationalism propagated by the INC, the Hindu Nationalists and the Communists, which was not only western but also anti-imperialist, prevented the other notions of imperialism like that of Ambedkar’s, from being popular and the attempts of the dominant castes and the academia to keep his ideas undermined. He says that, after five or six decades after his death, there is revival of interest in Ambedkar studies particularly in his idea of nationalism, mainstreaming him politically and socially.

Prof. S. Irfan Habib, Former Professor, Maulana Abul Kalam Azad Chair, NUEPA, New Delhi gave a talk on Nationalism and our Freedom Struggle. Mentioning that the ideas and values of nation and nationalism stand contrary today against our freedom fighters, he revisited the idea of nation and nationalism of Gandhi, Nehru, Patel, Bhagat Singh, Bose etc. There is a need to revisit the original archives, he says, to articulate nation, nationalism and culture of our country. Nationalism cannot be centred around one particular religion and this why the ethos of secularism was close to our leaders. Our leaders gave us an inclusive nationalism which was pluralists taking note of different communities, castes and linguistic groups and this should be articulated by those who wants to transcend towards an inclusive India. Prof. Habib concluded his talk with this remark,” it is time to move beyond symbolisms and slogans as nationalism is much more than that.”

The second speaker of the session was Dr. P. Kanaka Rao, Assam University, spoke on ‘Seva as Spiritual Act and constructive program as Swaraj in Gandhian Praxis’ He talks about the Gandhian constructive programme, a voluntary tradition, which started in 1920’s till 1940 and was followed by the later Gandhian and associates of Gandhian who termed it as the non-party process. He says that Gandhians, Marxists, liberals, were burdened to transform a traditional order into modern democratic India. He said that the crucial problem lies on which the agencies of transformations are namely political, non-political formations, voluntary organisations. He says that liberals and Marxist based it on the radical disjuncture with the past and their process of transformation marked by the anxiety of building it fast. However, Gandhi was different because he saw himself continuing and living with the past and to move with the traditions.

The last speaker of the seminar and session was Prof. V. Kishna Ananth, Sikkim University, spoke on ‘The Centrality of Karachi Resolution of the INC in the making of the Constitution: An appraisal of the Fundamental rights in Independent India’. According to him, India in terms of republic and democracy is not an abstract or vague theorization but a concrete idea that emerges through the constitutional scheme. Pointing excerpts from the Karachi Resolution, he notes that it was the draft of the constitution to be drafted much later.

Preeti Das, Research Scholar gave the words of thanks.