Life –line, A one act play by Angelos

How are you? Isn’t that the most common question that everyone around is asking each other .The moment we see someone ,inadvertently this question or sentence slips from our mouth. Let’s look at the university space, student from diverse region with different mother tongues coexist in this space. Even when we learn the basics of any language, the first thing we learn is to say is how you are. It’s so common right.

I m fine, that’s what the statistics say a large section of people reply with .But how fine are we, the questions attains importance in today’s scenario where everyone seems to be living in pretence of yes I am fine .With large number of student suicide taking place in educational institutions it becomes extremely important to see how well we are doing .People suffering from depression unable to address the problem to anyone is something to be bothered about.

Life –line a one act musical play was presented by Angelos. Angelos are the members of ICPF(Inter Collegiate Prayer Fellowship) involved in spreading awareness among youth against social evils and counseling them. The group is active mostly in southern India and has covered all districts of Kerala in spreading awareness. Their aim is to especially help out this new generation.

The first performance was done at the north shopcom while the second was done at south shopcom keeping in mind the fact that these places attract greater crowd.. The play dealt with problems of drug abuse, drinking among the youngsters.

The play showed three parallel stories going, focusing on the hardships and miseries of life that drives one to such an extreme step as to that of suicide .The first scene depicts the birth, crying of the child, the signal of life. And what happens with passage of time that the life which is so celebrated is given up.

In first story a son is unable to share his feelings with his parents due to the busy life in today’s era , which makes him miserable .While the son feels left out unable to share his feelings the father has some problems at workplace .Unable to cope up with the problem the father decides with the wife to commit suicide. In another story a girl is forced into Medicine studies as the parents find it a promising profession. Fear of losing their approval or hurting them, she doesn’t say she don’t want to pursue medicine. She struggles with the subject and finally when she feels she can‘t take it anymore she decides to give up her life. Here she is saved by friends and counseled by the doctors .The third story revolves around a youngster whose disappointment in love life drives him on the verge of suicide.

Between each act the of the play when the protagonist is at his lowest a message is sung “LIFE IS PRECIOUS ”.The play depicts how counseling and help by friends ,doctors help each one appreciate the gift of life and win over suicide. It emphasizes that nothing is bigger than life itself.

At the end of play ,Stephen a member of ICPF expressed his vote of thanks towards University of Hyderabad for rendering the space for the play and the greater message that goes along with it .He emphasized that when low or depressed, ask for help talk to people. Seeking help in depression is no cowardice .Also he told how suicide is attaining the tone of casuality.He says,”life is like a train journey

we have to reach our destination, in between many stops come which he meant for hardships and difficulties but because of any of these stops one should not forget their destination. He particularly emphasized that one should that think that suicide has nothing t do with me. One has to be aware of people around them. 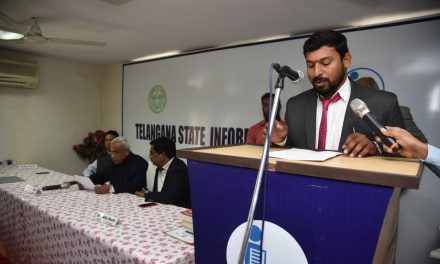 Lipid Signaling in Health and Diseases in Plants and Animals