Dr. Nikhila who is in the Department of Film Studies and Visual Communication in the EFLU gave talk on the Marking out the South in/of Hindi Cinema An approach via Remakes at School of Social Science, University of Hyderabad (UoH) on 28 October 2014.

Dr. Nikhila speaking to audience of students, faculty and staff gave her talk about the remakes of Kannada movies into Hindi movies. She said cinemas in India are identified by their languages, films cross linguistic borders for reaching audience. Remake is done through dubbing and also by subtitling the Kannada and Tamil films in English. She also said that films made in one language are dubbed into another language and are surviving. The remake of the Kannada movies into the Hindi movies are done by the initiative taken by the Kannada film industry.

She further speaking said that in the remake not only the language changes but also other elements also changes. She also spoke about the cultural flows from Kannada to Bombay cinema, like she said about the repertoire of images and narratives that go on to constitute the South in particular ways vis-à-vis Hindi.

Dr. Nikhila did her doctoral work was on women’s writing and communalism, considering the context of Partition. Her areas of research interest are Gender Studies and derivatively there from, Film and Visual Culture Studies. She finds the areas of convergence of language and gender particularly challenging, and much of her research and publications are in this interface and their changing dynamics across times and spaces, looking at print and other forms of media. 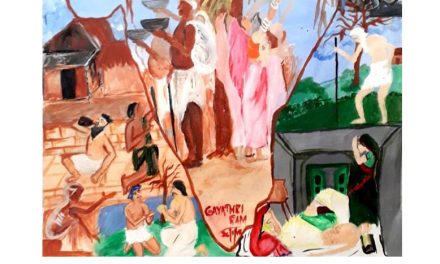 Democracy of the Oppressed: Adivasi Poverty and Hunger