Twenty-two year old Delhi University student Mihir Vatsa was the connoisseur of all when he was presented with the fifth Srinivas Rayaprol  Poetry Prize at the Golden Threshold on 25th October 2013. Renowned poet from Goa Mr. Manohar Shetty gave away the prize in the presence of Prof. Ramakrishna Ramaswamy and family members of late Shri Srinivas Rayaprol.

Even the continuous downpour for the last three days did not deter the poetry lovers from the city and UoH from being part of the award function. The audience were kept mesmerized with some fine poetry rendition by both Mihir Vatsa and the Chief Guest Manohar Shetty.

Accepting the prize, Mihir said that it was one of his life’s best moments. He was excited at being in Hyderabad and said that he will go back to Delhi and continue to write poems with more passion. He shared that his mother was very excited at him receiving this coveted prize and told him to take  lot of pictures which she can cherish as memories and share with relatives and friends. Later Mihir kept the poetry lovers in rapt attention with rendition of some of his poems from the 60 odd that he has penned till date.

Manohar Shetty who is also the editor of Goa Today gave an insight into the poetry contest and the process of selection. He said that this is one poetry prize that helps to identify young and upcoming poets in the country. He too kept the audience in rapt attention with his poems, some of which he wrote when he was 19 years old.

Prof. Ramakrishna Ramaswamy, Vice-Chancellor, UoH said it was a happy moment for him and the University, not only to be associated with the poetry prize but also as this event was being organized at Golden Threshold in the city. He shared that UoH will organize more literary and cultural events at GT which will help the city audience to be part of our University activities. Prof. Ramaswamy later hinted that efforts are on to start a Golden Threshold e-press which will publish quality e-books etc.

Prof. Aparna Rayaprol, faculty in the department of Sociology at UoH and daughter of late Shri Srinivas Rayaprol gave a brief of the life and work of the celebrated poet, Srinivas Rayaprol and mentioned the winners of the last four years.  Aditi Machado was awarded the inaugural Prize, and Hemant Mohapatra (2010), Aditi Rao (2011), and Tushar Jain (2012) have won it in subsequent years.

Jointly administered by the Department of English at the University of Hyderabad, the Srinivas Rayaprol Poetry Prize was instituted in 2009 by the Srinivas Rayaprol Literary Trust to recognise excellence in Indian poetry written in English. The award is highly regarded and consists of a citation, along with a cash prize of Rs. 10,000. 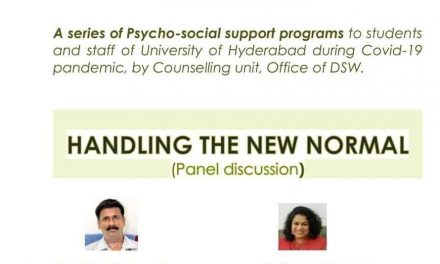