Hyderabad also known for its rocks has a large number (about 16) of lakes spread in between these rocks.  As the struggle for saving the shrinking lakes and razing these rocks goes on by the young and enthusiastic Hyderabadis; on the vast expanse of University of Hyderabad (UoH) campus a group of people, encouraged by the Vice Chancellor of the University, are working very hard to bring all the academic institutions spread around Hyderabad under an umbrella called G-HAN (GREATER HYDERABAD ACADEMIC NETWORK).

The idea was given by the former Human Resources Minister of State, Dr. D Purandeswari visited UoH campus and encouraged the heads of institutions (in Hyderabad area) to come together to discuss various issues among themselves. The Vice-Chancellor of UoH, Prof. Ramakrishna Ramaswamy marshaled his academic enthusiasts in the campus to form the G-HAN team. The  team has already identified a good number of academic, research institutes affiliated to the state/central government. Strange, but true, that the greater Hyderabad has stretched its limits beyond 100-kms and the G-HAN team has succeeded in getting an equal number of institutes. The city also holds a distinction of having THREE Central Universities: UoH, MANUU and EFLU.

What is the scope of this idea? It is not only to have a mere exchange of information, but also to enhance professional relationship in the form of academic collaborations. The spurt in the present day research in the fields of Nanotechnology, Biotechnology etc. demand a huge incorporation of state-of-the-art instrumentation, it is here that G-HAN can play a crucial role in sharing these invaluable resources. In fact, it was on these lines that the minister had raised concern in the meeting with the heads of Universities/Institutions in Greater Hyderabad.

The ever enthusiastic team of G-HAN is making every effort to bring up-to-date information on all the institutions, apart from making the web-site more interactive to enable quick editing and corrections. Though at present only government funded institutions are being put together, this can be expanded to include reputed private academic and R&D organizations as well. 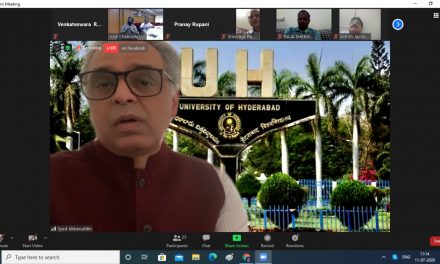