The University of Hyderabad (UoH) has been ranked among India’s best educational institutions for the year 2018 as per India Rankings, a government of India-backed survey, using parameters ranging from research facilities, academic excellence to placements of graduates. The India rankings 2018 were done under the National Institutional Ranking Framework (NIRF) that considered more than 3,954 institutes across 20 parameters.

The Minister of Human Resource Development, Mr. Prakash Javadekar gave away the rank certificates to the top institutions at a glittering function organised at the Vigyan Bhavan today ( April 3, 2018). According to the rankings released by the Ministry of Human Resource Development the UoH is ranked 5th among all Universities and 11th among all the Institutions in the country. More than 200 Universities were surveyed for the rankings. Prof. Appa Rao Podile, Vice-Chancellor, UoH received the rank certificate and memento from the HRD Minister. Last year, UoH was ranked 7th among Universities and 14th among all Institutions in the country.

Prof. Appa Rao Podile, Vice Chancellor, UoH credited this honour to the stakeholders of the University. “We are happy to be among the top 5 universities in the country. The university has improved its rank in this category (from 7th to 5th), but we shall not rest here. UoH will redouble its efforts to ensure that it is recognized as a top institution not only in India, but also internationally for its quality of teaching and research. We are happy that our faculty, students, officers, and non-teaching staff, along with our alumni have played a vital role in the growth of the University. We aim to enhance the quality of education and research to produce the best students who will be model citizens of our country and in the process contribute to the world’s knowledge economy as well,” he added.

Prof. Appa Rao had last year constituted a committee to carefully analyse the areas where university has to improve to acquire a better position in both national and international rankings. This committee had also prepared the application for the University to bid for the status of Institution of Eminence (IoE), an initiative of the GoI’s MHRD. The University is among the 20 shortlisted institutions for the final ten IoEs in the country. Yesterday (April 2) in New Delhi, the UoH made a presentation to the Empowered Committee constituted for selecting the IoEs.

There were 3,954 institutes in the ranking fray this year, i.e. 745 more applicants than the previous year. The other categories of institutes that have been ranked include engineering, management, law, pharmacy, architecture, medical, and colleges. 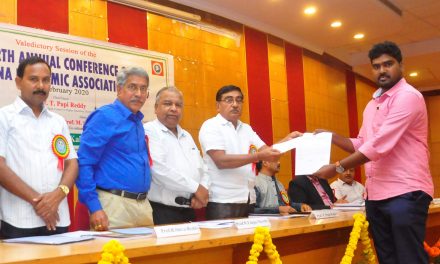 Cubic Mile of Oil: Realities and Options for Averting the Global Energy Crisis