Online Webinar on “Independent India @ 75: Self Reliance and Integrity” 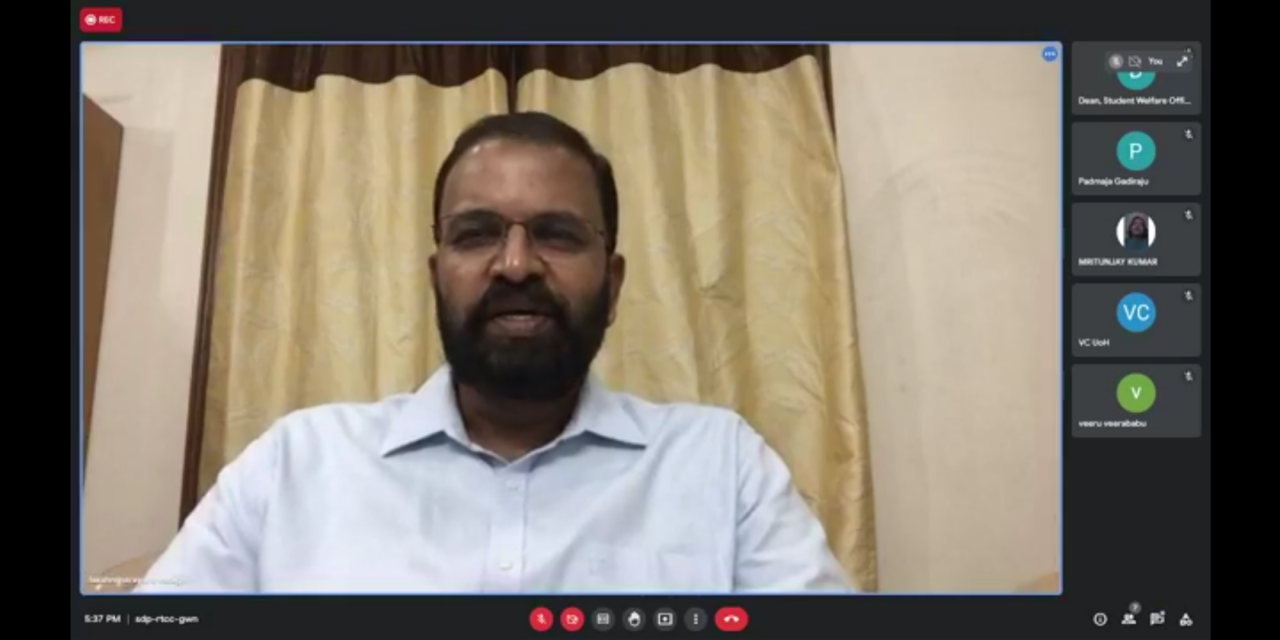 University of Hyderabad, on the occasion of Vigilance Awareness week organized a webinar on the theme – Independent India @ 75: Self Reliance and Integrity, on 30th October, 2021. It was organized by the Dean, Students’ welfare office in collaboration with the Department of Political Science, School of Social Sciences. Dr. D. Veerababu, Assistant Professor, Department of Political Science was the Coordinator of the program, supported by Deputy DSW Dr. G. Padmaja.

The webinar started with opening remarks by Prof. B. J. Rao, Vice Chancellor of University of Hyderabad. In his remarks, he pointed out the problem of security in our country, and stated that in order to overcome these threats, we need to be vigilant and alert.

The invited speaker on the occasion was Shri. V.V. Lakshmi Narayana, IPS and Former Joint Director at the Central Bureau of Investigation. He was introduced to the audience by Dr. D. Veerababu, Assistant Professor, Department of Political Science. In his speech Shri. V.V. Lakshmi Narayana strongly pointed out that corruption is more evil than terrorism. He reminded the valuable words of Dr. A. P. J Abdul Kalam’s indicating that Integrity is an integral part of functioning in all walks of life, integrity is a personal choice, and integrity is a way of life, Highlighting the importance of integrity for every individual, he said that if we want to be self-reliant, we need to be courageous and there will be sacrifice to build a future. He cited the examples of great personalities such as Mokshgundam Visweshwarayya who stand as symbols of integrity in life. Karma yoga in Bhagavad Gita says that whatever action is performed by great men, it is followed by common people. Hence he pointed that leaders should be of great integrity and several people will follow the leader. He mentioned how integrity plays an important role in society’s survival. For some, it becomes a choice while for some, it’s a way of life. He quoted our former President late Dr. A.P.J. Abdul Kalam: when there is order in the nation, there’s peace in the world. He concluded by saying that if we want to be self-reliant, and be inclusive in a system, we need to demonstrate integrity. He made a mention of how deviation from integrity leads to irreversible losses such as the serial blasts that our country witnessed sometime back.

The webinar was attended by many students via facebook live streaming and their questions were addressed by Shri V.V. Lakshmi Narayana garu. Prof. B. J. Rao, Vice Chancellor of UOH in his concluding remarks thanked the guest speaker for the session and his valuable time, and he posed an important open question, “why is there a lack of integrity among humans?” for the viewers to introspect. This is because we do not understand the essence of being a human. When goals alone become important, means to reach goals are often compromised. On the other hand, Corruption will not result if integrity is present.

The webinar ended with vote of thanks from the DSW I/c. Dr. G. Padmaja.

Video link of the webinar: