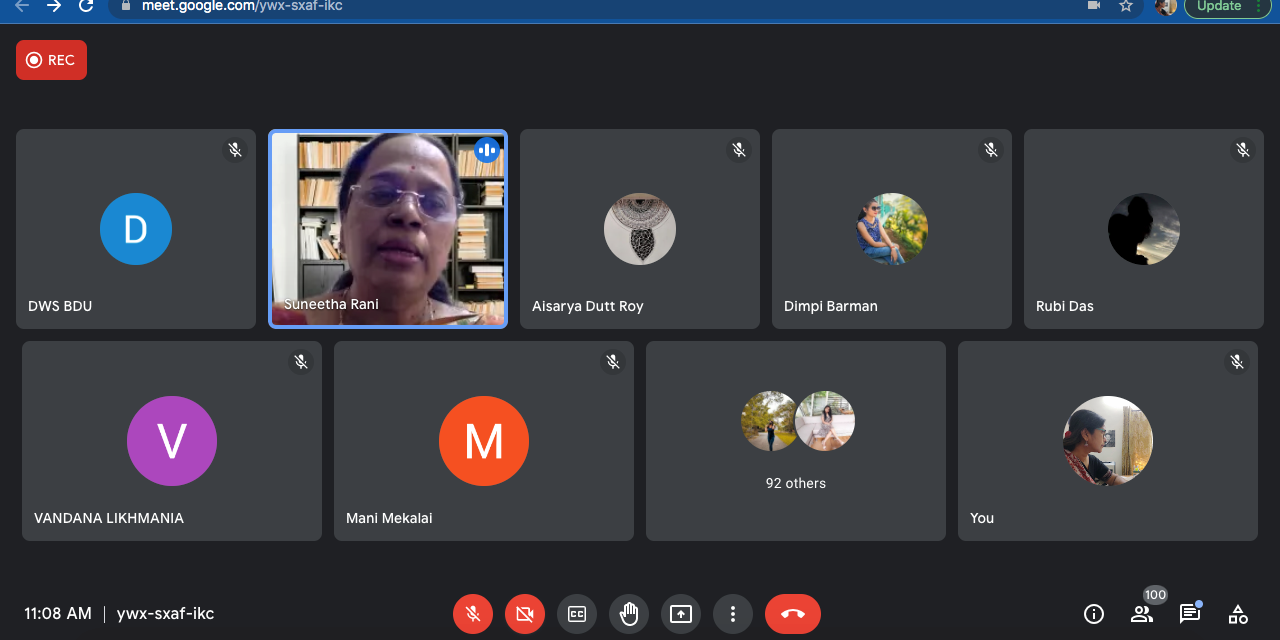 The Centre for Women’s Studies (CWS) at the University of Hyderabad organised a Panel discussion on November 26th 2021 as part of  the 16-Day Webinar Series in commemoration of  ‘International Day for Elimination of Violence Against Women’, 2021 on the theme: Orange the World: End Violence against Women Now. The programme is being jointly organised by the Bharathidasan University (BDU), Indian Association of Women’s Studies (IAWS), Regional Association for Women’s Studies (RAWS) & All India Women’s Studies Students Forum (AIWSSF). The invited Panelists included Vyjayanti Vasanta Mogli, transgender and human rights activist from Hyderabad, and Dr. Sowjanya Tamalapakula, School of Gender Studies, TISS Hyderabad.

The discussion was inaugurated by Prof. K. Suneetha Rani, Head of CWS introducing the speakers and reading the esteemed Preamble to the Indian Constitution, to mark the occasion of the 72nd Constitution Day of India. In her discussion on the “Violence on Trans bodies,” the speaker Vyjayanti Vasanta Mogli brought to light the ways in which transgender women face physical, structural, caste and gender identity based violence. Pointing to the problematic of the medical discourse, she stated how misgendering of children begin within the medical setting, where intersex bodies are assigned binary genders. Historicizing the LGBTQ movement and the legal gains such as the NALSA Judgement 2014, the decriminalisation of homosexuality in 2018 achieved by the community, she said that transwomen have been a crucial part of this struggles and that these gains are achieved on the graveyard of transgender bodies. Social stigma and lack of choices in livelihood, precarious work conditions are all forms of violence that transgender women face recurrently. She concluded with instances and cases of violence on transgender women and the nature of barriers to their access to legal and social justice.

Dr. Sowjanya Tamalapakula’s discussion on “Rape, Sexual Violence and Legal Justice in India” focussed on the nature of violence on women and its relation to caste hierarchies and brahminical patriarchy. Pointing to the nature of outcry against rape, she scrutinized the ways in which sexual purity and sexual access is constituted in the caste system. Taking cue from the cases of sexual violence against Mathura, Nirbhaya, Khairlanji, Park Street rape case and others, she pointed out that the politics of justice, and the outcry against these cases were determined by the question of caste and sexual purity.  She foregrounded how rape and sexual violences are instrumental in maintaining the hierarchy of caste and control by the dominant brahminical ideology. Her discussion brought forth a framework to understand sexual violence as a constitutive force in the maintenance of caste order and led the participants to rethink gender-based violence.

In tandem with the theme, these discussions brought to the fore, perspectives on gender based and sexual violence that will help women’s studies and women’s movement to reimagine the strategies to combat gender and  caste-based structural inequalities and elimination of violence against women. In her concluding remarks, Dr. Deepa Sreenivas of the CWS, University of Hyderabad, highlighted the importance of the collaboration between IAWS, RAWS, BDU, AIWSSF and the CWS, UoH, and hoped that such solidarities will enable us to reflect on and contest new forms of gender violence and inequalities. Prof. N. Manimekalai, Director and Head, Department of Women’s Studies, BDU ended the session by reiterating the insights and reflections generated by the speakers and the participants and marking the significance of such discussion on Constitution Day.