Professor Ramdas Rupavath, Social Scientist associated with the University of Hyderabad (UoH) has been selected for the “BANJARA RATNA Excellent Academician Award” 2020. Prof. Ramdas Rupavath is currently working as Professor in the Department of Political Science, School of Social Science, University of Hyderabad and is also the Head, Centre for Human Rights. The award will be presented to him on 1st March 2020.

He has been chosen for this award for his academic contribution. Many others have also been selected for this ward from fields of Social Sciences, Sciences, Music, Dance etc. This award is given by G Swami Naik Memorial Trust based in Telengana. Shri G Swami Naik was one of the first GOR Banjara Rajyasabha Member of Parliament (1980-92). 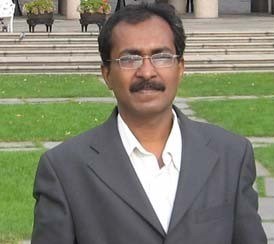 Prof. Ramdas who was born in a small hamlet of Telangana State in 1970s. Hamlets in India have not changed radically during 73 years of Independence. He did his M.A., M.Phil., and Ph.D. from Jawaharlal Nehru University (JNU), New Delhi. His work focuses on development of the Tribal communities with special focus on their Social, Economic, Political, Educational and Cultural upliftments. He has discussed and developed field experiments which stand as an important methodology to explore the relationships between the Tribal and the upper communities with mostly special attention on ‘A Perspectives from Below’. For Tribal alienation, education and social movements he was recently honored with “Ambedkar Media Award 2019” by Sneha TV on account of his top Academic contribution and role in constructing, redesigning and promoting the ‘Role of Media in Promotion of Bahujans Empowerment’.

Prof. Ramdas was also given the “Best Teacher of the Year” 2019 on 16th December 2019 in Dubai by International School Awards (ISA).

Prof. Ramdas Rupavath known by virtue of his innovative ideas in various research publications has tried to explore the research gaps that are existing among the tribal and minority communities and for the redressal of the same, he had developed his own ‘Theory’ “A Perspective from Below” which states that “the expectations from the top-down State-centric provision can have significant impact on the education of all children in India remains evidently a pipe dream” besides inventing a “Rupavath Vicious Circle” that is aimed at tackling the problem of illiteracy among the Tribal Communities. Besides this, his theory was reviewed by top foreign researchers who are prominent experts in the same field and belonged to developed counties in which the prominent contributors were from School of Oriental and African Studies (SOAS), University of London.

Throughout this theory, it becomes very clear that for minority groups, simply providing a classroom with a teacher and policies made with the expectations that they will apply to all, without the involvement of those whom it will affect, is inadequate. The process has to be holistic, the minority group in question have to be involved in the process, through them research can be done to gain first hand experiences and knowledge on what will work for the community, the style of teaching and how state education can cultivate their culture, rather than abort it.