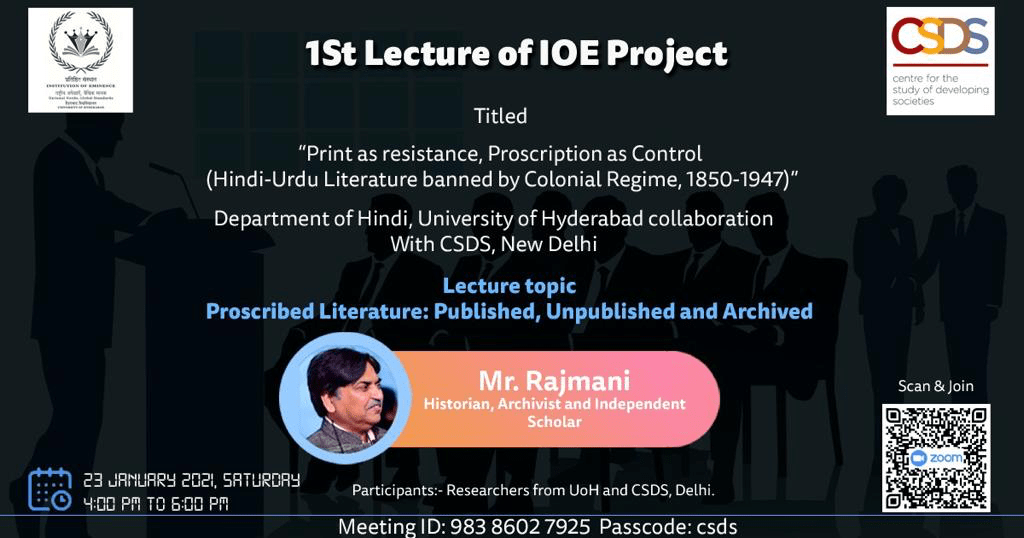 The Department of Hindi, University of Hyderabad (UoH) in collaboration with the Centre for the Study of Developing Societies (CSDS, Delhi) has organized the 1st lecture of IoE under “Print as resistance, Proscription as Control (Hindi-Urdu Literature banned by Colonial Regime, 1850-1947)” on the lecture topic “Proscribed Literature: Published, Unpublished and Archived” by Mr. Rajmani, Historian, Archivist and Independent Scholar, on 23 January, 2021.

Mr. Rajmani, author, poet and archivist with decades of experience at documentation and record-keeping at National Archives of India and other leading institutions. Mr. Rajmani has played a crucial role in cataloguing, compiling and publishing several anthologies, and in preparing exhibitions of patriotic writings from the colonial period. After being welcomed by Prof. Gajendra Pathak, the Principal Investigator and the Head of the Dept. of Hindi, UoH, Mr. Rajmani, made a substantial and lavishly illustrated power point presentation from CSDS seminar room in Delhi. His presentation confirmed the belief that research and documentation on literature proscribed by the British Government is yet to be carried out in any significant detail. He reiterated that ‘Proscribed Literature’ was a generic term for a creatively rich print archive, which encapsulates pamphlets, magazines, newspapers, letters, speeches, notices, horis, kajris, thumris, daadra, alha, and myriad other musical forms.

The lecture was attracted a lively discussion amongst 40-odd people present in two cities: Hyderabad and Delhi. The research students were both aware and conscious of the relevance of the research for historical and contemporary contexts and Mr. Ashutosh, Mr. Naushad and Setu especially posed some sharp questions. Dr. Ravikant, Co-PI in the project conducted the discussion and acknowledged that, at this stage we had more questions than answers, which augurs well for the project.