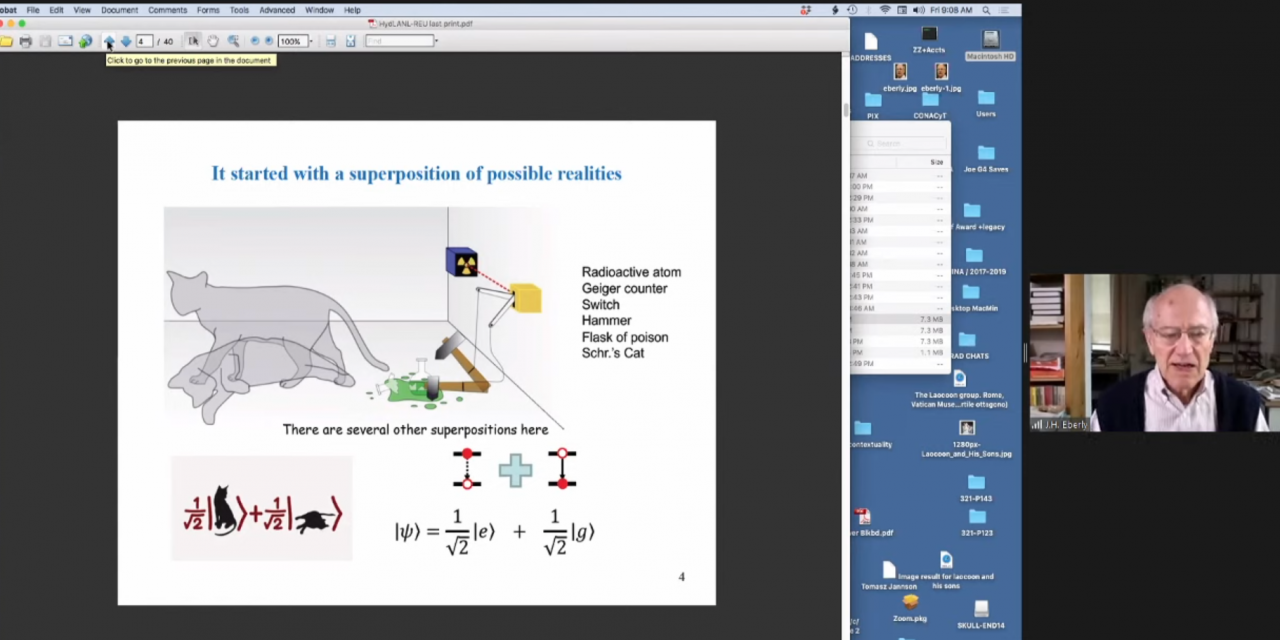 The School of Physics, University of Hyderabad organized a online distinguished lecture on “Quantum Entangled and its Classical Cousin, Where are We Now?” by Prof. Joseph H. Eberly on April 16, 2021.

Professor J. H. Eberly received his Ph.D. in Physics from  Stanford University in 1962, working with Professor E. T. Jaynes on “Blackbody distribution law in semi-classical radiation theory”. He joined the Department of Physics and Astronomy, University of Rochester as faculty in 1967, and remained there ever since.  Currently he is the Andrew Carnegie Chair Professor of Physics.  Prof. Eberly has published about 500 research papers, with nearly 30000 citations, and is a very highly celebrated theoretical physicist, specializing in the field of Quantum Optics.  Fellow of American Physical Society and the Optical Society of America, Founder Editor of the first ever online journal ‘Optics Express’ are a few among the many prestigious positions Professor  Eberly held.

The very first point that Prof. Eberly addressed during the lecture was: “Where does entanglement start?” Entanglement’s role in physics began in 1935 with Einstein’s attempt to show that quantum mechanics is an incomplete theory that deals with spooky events. This was discussed in a paper written with Rosen and Podolsky, a full three decades after his Nobel-celebrated achievements of 1905. In a remarkably quick response to Einstein, Schrödinger’s assignment of the term entanglement also appeared in 1935, in close company with the introduction of his famous half-alive and half-dead Cat Entanglement, which is now 85 years old, and his 1935 paper is one of the most-cited ever.

Prof. Eberly went on to explain the role of Schrödinger in the whole scheme of things.  He mentioned that wave mechanics, due to Schrödinger, is mainly Optics applied to a particle wave, which is often misconstrued as Quantum Mechanics.  Whereas Quantum Mechanics starts with duality, meaning thereby that a quantum object can be treated as a wave and a particle at the same time.

Dirac in his famous book on Quantum Mechanics, stated that entanglement is a combination of particle and wave properties and at least two particles are needed in order to mix identity with interference resulting in an inseparable superposition state, namely the entangled state.

Now the question that comes next is: What about superposition?

Showing an illustration Prof. Eberly said, “Since the introduction of Schrödinger’s Cat, entanglement has been a part of quantum mechanics, a big challenge to physicists and to most science fiction writers. The picture of the Cat introduces an issue of superposition of possible realities; the most famous ones being: the cat might be alive and the cat might be dead.”

He further added that “Entanglement combines particle and wave properties which is what makes it fascinating because these are two aspects are impossible to connect otherwise.  At least two particles are needed in order to mix their identity with interference resulting in a nonseparable superposition state, namely the entangled state”. 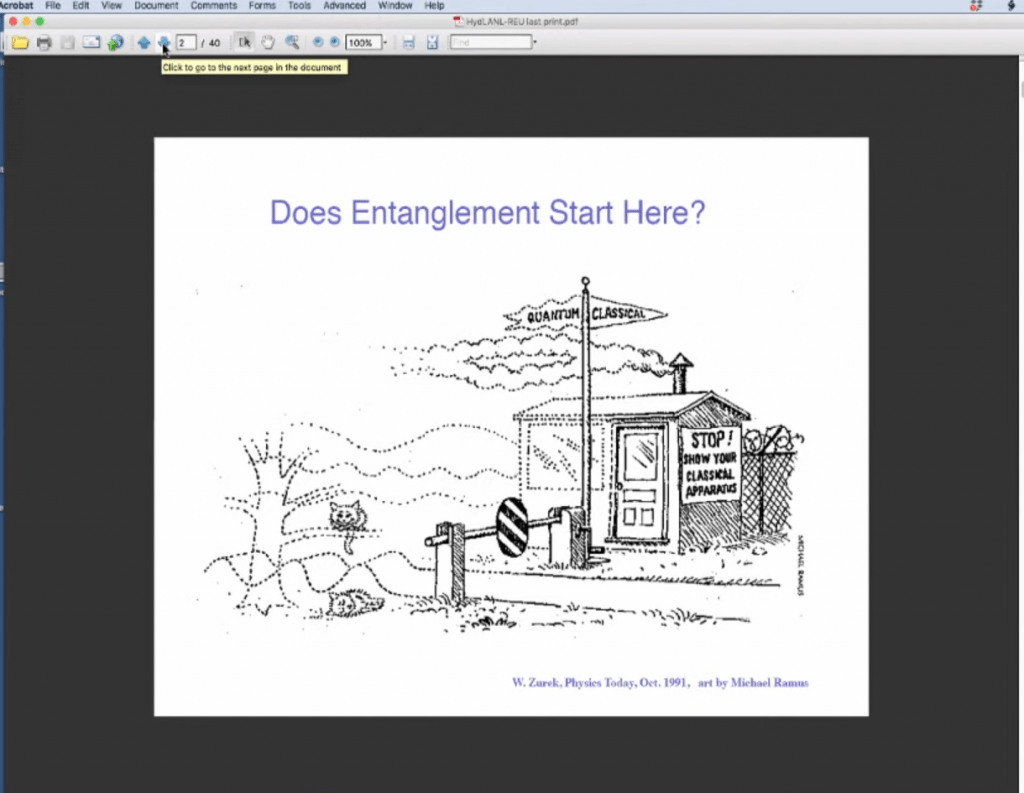 During the later part of the lecture, Prof. Eberly also talked about the “Copenhagen interpretation”,  which deals with the issue of dual realities in an old fashioned way. According to the Copenhagen interpretation, there is a simultaneous existence of the Cat being alive and the Cat being dead.  He further clarified that a quantum system does not possess physical properties that exist independently of observation.

Instead of fading away, entanglement is increasingly interesting and on very practical grounds. It is now discussed by engineers and entrepreneurs, in government and industry and even in finance. Still without a fully agreed interpretation of Quantum Mechanics to quantum states of Nature, this acceptance became automatic two decades ago when it began to be accepted that entanglement holds the key to our various future advances in communication, information security and high-power computing, all flamboyantly and confidently expected to be entanglement-revolutionized.