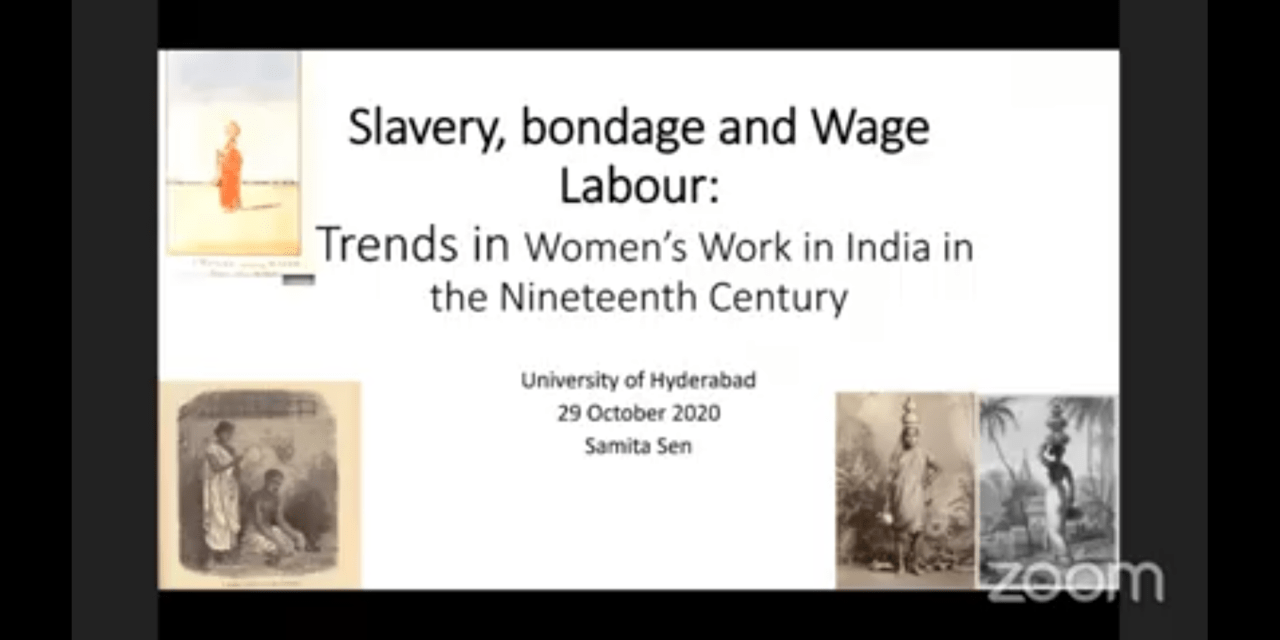 Addressing the lecture, Dr. Samita Sen, Vere Harmsworth Professor in Imperial and Naval History at the University of Cambridge, examined how the 19th century world of labour looked like when we see it through the lens of gender. “I will also try to focus on marriage as an institution for gender in labour. And I argue that looking at marriage provides crucial linkages between productive and reproductive labour,” she said.

She continued, “In one of the essays by Nirmala Banarjee titled, Modernization and Marginalization, she argued that two main occupations of women in the traditional economic sector that were marginalized in the 19th Century are: food processing and spinning. I will be looking at this through three frames – women industrial labour, plantations and migrations and lastly, domesticity (domestic and sex work).”

Dr. Samita went on to explain the role of women in the industrial sector in 19th century and said, “In India and in many other countries, the first modern factory came in textiles. The two major industries in major cities of eastern west of the country were cotton textile in Bombay and jute mills in Calcutta. Cotton textile industry was very important in most part of the world, including Britain, Europe, USA and Asian countries like China and Japan and these cotton textile industries primarily employed women and children. If we take the case of Asian countries, China and Japan employed usually young women (child and adolescent girl) who worked before marriage to contribute to their natal homes and to bear the cost of their own marriage. After marriage, they usually left employment and they concentrated on household work and child care and return to work only in exceptional circumstances. But in India, even textiles didn’t employ a majority of women.”

“Scotland being a major producer of jute in the whole world. When we look at jute mills workforce in Scotland, women were a major part of it. In fact, Dundee was known as the woman’s town. However, there is a stark difference in gender composition when we compare Dundee and India. In Calcutta jute mills, the women participation was never more than a quarter,” she added.

“In traditional textile industry,” Dr. Samita said, “we know that there was a very strong taboo on women weaving. This taboo was teleported into modern mills and both in cotton and jute mills women were forbidden to weave. However, traditionally, spinners were usually women. Only child labour, usually male child labour, predominated in a sub field in the spinning department. Other ways in which Indian textile industries differ from other countries, apart from its gender composition, that is when you look at women who did work in textile industries, there were no unmarried women; they were also widows, separated or divorced.”

Dr. Samita then shifted her focus to other capitalist enterprise mines and plantation, where she mentioned caste and ethnicity played a major role. She said, “The coal mines were established roughly in mid-1880s and they became major employers of women. They grew rapidly, especially in the Raniganj area in West Bengal. The participation of Adivasi workers declined over the early 20th century and very few of them converted to mining full time. A range of other low caste workers entered the mining work. By mid-1930s only two percent of in West Bengal was migrant.”

Continuing on the same she said, “The distinctive feature about the mining work was ‘family gang system’, in which men, women and children worked as a unit. The assumption of this unit was to work as a family. But in reality, a large proportion of unfamiliar men, women and children worked together in the gang system. There were four sub types within the family gang: the family unit, the co-habitational unit, single women unit and single men unit. Then in 1920s, there were around 15,000 women in the mining work, constituting about 35 percent both among surface and underground. The question of women labour attracted considerable controversies in this period when the ILO proposed a prohibition on women working underground. There was a huge opposition that followed, they argued that primarily because it would disrupt the gang system. In 1923, however, mine owners had to agree to the prohibition of children under 13 working in the mine areas. Now this caused difficulties for women who worked underground along with their young children. Finally after much discussion and debate, in 1929 women were removed from the workforce working underground and by 1938, there were only 11 percent of women working in the mine workforce.”

Dr. Sen also talked about the migration patterns and mentioned that 19th century witnessed a massive mobilization of labour in India. There were four strands in the colonial period: overseas migration, internal migration – primarily to Assam, mining migration, rural and urban migration. All these migrations include women migrants but to certain extent. While in rural and urban migration and in early years of overseas migration, there was a domination of single male migration. Among the various strands of migration, it is only in the case of plantation migration that you have a policy of directed (towards women in particularly) recruitment. Even in the directed migration there was a perceived dichotomy between the informal and commercial modes of recruitment that was undertaken by agencies to make profit. The commercial recruitment of workers symbolized a mode of mobilization like trafficking. The commercial agencies were supposed to buy and sell labour and they were able to influence labour. However, fraud and deceit was always a part of migration.”

The she talked about the three ways in which the question of women’ marriage and labour. “Firstly, it is the primary means of circulation of women, second, the transactional character of marriage and lastly, marriage is proximate to markets in (domestic) slaves or servants and prostitutes or sex workers. Now, another point is we in India have a very high proportion of population recorded in domestic service in comparison to other countries. A major change was noticed in 1931 with an increase in women domestic workers. The existence of secondary wives often synonymous to Dasis and Bandhis were upheld as legitimate practices of polygamy, signalling this continuant. This is how there was overlapping functions of productive and reproductive labour. In the early years of colonial rule, magistrates often absconded women to men who claimed them, even if they were brothel keepers or from some dance groups. Later, the court refused to interfere for setting such women free. Muslim men often went through a form of marriage called Nikaah to retain control over female slaves, rendering marriage as a slavery.”

Towards the end of the webinar, Professor Anindita Mukhopadhyay, Department of history, UoH said, “The two points that struck me: one was that there is a childhood for a male child but not for female child and the second point was after 1901, the power of consent to migrate that was given to women was not there, but it was with males of the family. After hearing Dr. Sen, I also feel that we have some similar issue likes women slavery and bondage that are still prevailing today’s society.”